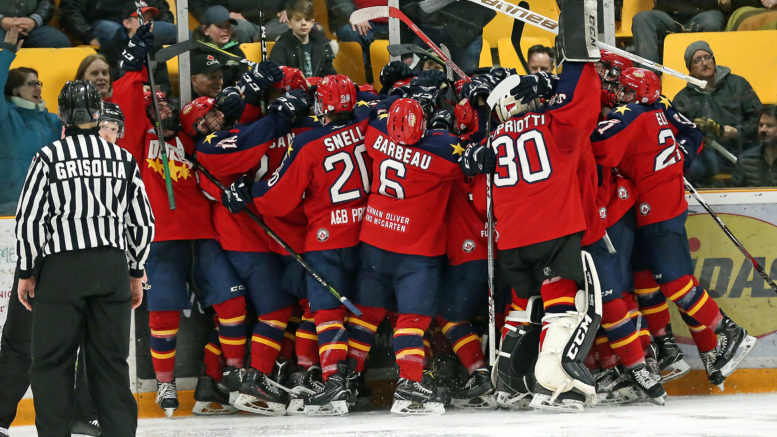 WHAT A FINISH- The Wellington Dukes celebrate their Game 5 double overtime victory over the Aurora Tigers Sunday night at the Aurora Community Centre. With the 3-2 win, Wellington punched its ticket to the 2018 Buckland Cup Finals. (Photo by Ed McPherson / OJHL Images)

Your humble scribe recalls reading a chapter in a book a few years ago about professional hockey coaches and one section concerned Jean Perron and his 1986 Stanley Cup champion Montreal Canadiens.

That triumph is considered by some hockey observers including the author (and most Habs fans if they are being honest with themselves) as an “unexpected championship” given the Canadiens were hardly the post season favourite when the 1986 playoff march commenced.

Montreal had finished fourth in Prince of Wales conference that season and surely either the 50 win plus Philadelphia Flyers or the Washington Capitals would be the representative of the eastern section of North America when the Cup was vied for in May.

Heck, even if the Habs somehow got through to the final, the Edmonton Oiler juggernaut would be surely be waiting with open arms for shot at that organization’s third straight cup.

But things broke right for Les Canadiens that spring as they survived a scare from the Hartford Whalers that needed a Game 7 overtime goal off the stick of Claude Lemieux.

The New York Rangers took care of Philadelphia and Washington in the opening two rounds before the Habs topped the Broadway Blueshirts in five games to take home the Prince of Wales trophy and, over in the Campbell Conference, one only needs to utter the name ‘Steve Smith’ to recall how the 1986 Battle of Alberta turned out.

In the end, it was the Canadiens marching onto Ste. Catherine street with their birthright trophy with a rookie goaltender in Patrick Roy leading the charge.

What this long diatribe means to illustrate is the Wellington Dukes are on their own march towards a similar ‘unexpected championship’ that would be somewhat surprising  should they manage to slay the favoured Georgetown Raiders in the next two weeks.

Sure the locals were the best of the Ontario Junior Hockey League’s East Division this season but only because they ran away and hid from the field.

But after a scorching start, Wellington staggered to the finish line, losing to top seeds like Aurora, Markham and Newmarket in the final weeks of the campaign, looking like anything but world beaters in the process.

They needed seven games to get past the seventh seeded Pickering Panthers and trailed the Newmarket Hurricanes 3-1 in games before roaring back to quell the Canes in seven.

No one that watches the team regularly would deny the hockey club was sputtering at that stage of the post season.

But a few key things started to happen during this playoff run to bring that familiar sense of Jr. A post season excitement back to Prince Edward County. 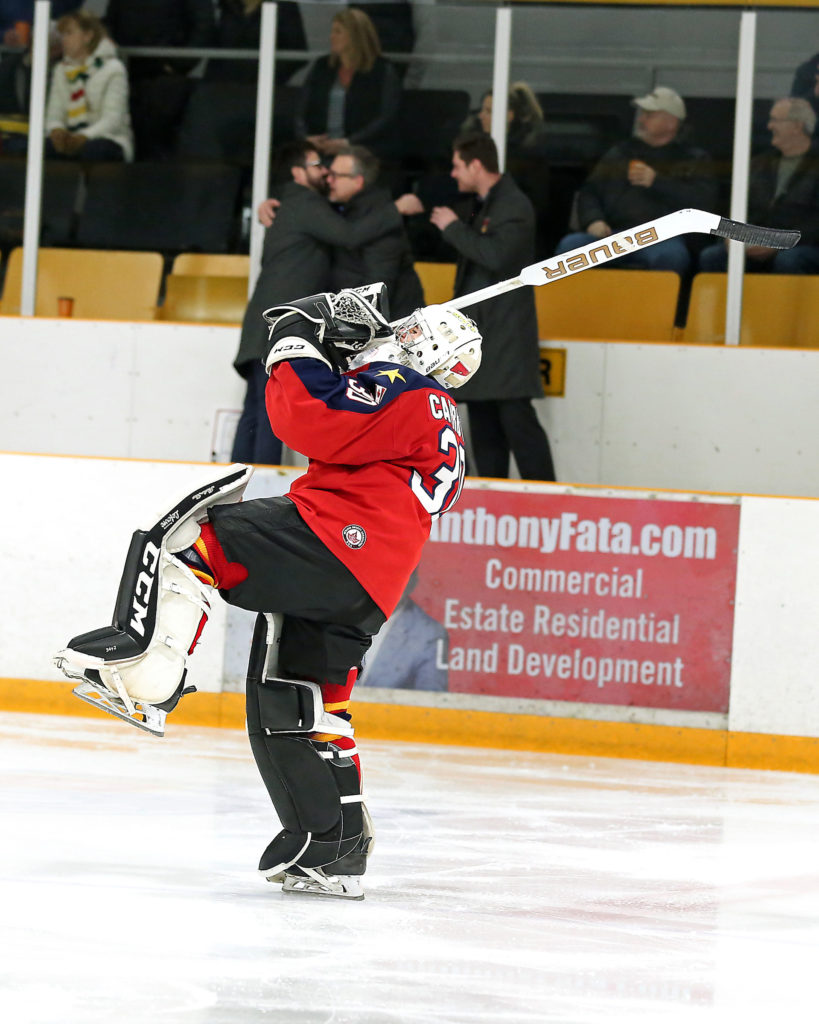 As the Wellington Dukes coaching staff celebrates on the bench, goaltender Jonah Capriotti does likewise on the ice after his team wins Game 5.
(Photo by Ed McPherson / OJHL Images)

After an OJHL-mandated sit down of the final two games of the Pickering series and the first two of the Newmarket series after swinging his blocker wildly in a post goal scrum, Capriotti is giving Wellington the type of netminding they need to win at this time of year.

In seven of his last eight Buckland Cup games, Capriotti has given up two goals or less and if the Aurora Tigers are looking for reason it’s not them playing for the right to represent the OJHL at the 2018 Dudley Hewitt Cup in Dryden, ON next month, they need not look farther than the young man in the Wellington crease.

To get that complete tale, one would have to go back to the regular season when former Duke Josh Supryka was added to the Dukes affiliate players list in case his Chatham Maroons were eliminated from the Sutherland Cup playoffs and the locals could utilize a body up front.

But then Supryka had an idea.

His roommate in Chatham was former OHLer Bryce Yetman and Supryka wondered to the Dukes ‘Can I bring a friend?’.

A little while later, a couple of Sault Ste. Marie natives playing in Niagara Falls for the Canucks in the Jr. B circuit that Yetman knew through his time with the Greyhounds indicated they might be interested in playing in Wellington if their Greater Ontario Junior Hockey League post season was cut short.

Soon, Andrew Barbeau and Frank Pucci were formally added to Wellington’s approved affiliate list without the organization really expecting anything to come of it given the possibilities of playoff runs in Western Ontario running their course.

But, much like other teams that have had the right breaks at the right times, all four players became available at the same time when the Maroons and the Canucks were eliminated on the same night.

Wellington needed the help as they found themselves on the brink of elimination at the hands of Newmarket as the Dukes prepared to host game five.

The four players arrived in the afternoon of that evening’s contest and, save Supryka, found themselves taking warm up in strange colours on a foreign ice surface in an elimination scenario.

Yetman would score a big goal in the final minute of the second period and Wellington started to believe in themselves perhaps a little bit more than they did when they skated off the Ray Twinney pad in Newmarket one night prior after a 3-2 loss. 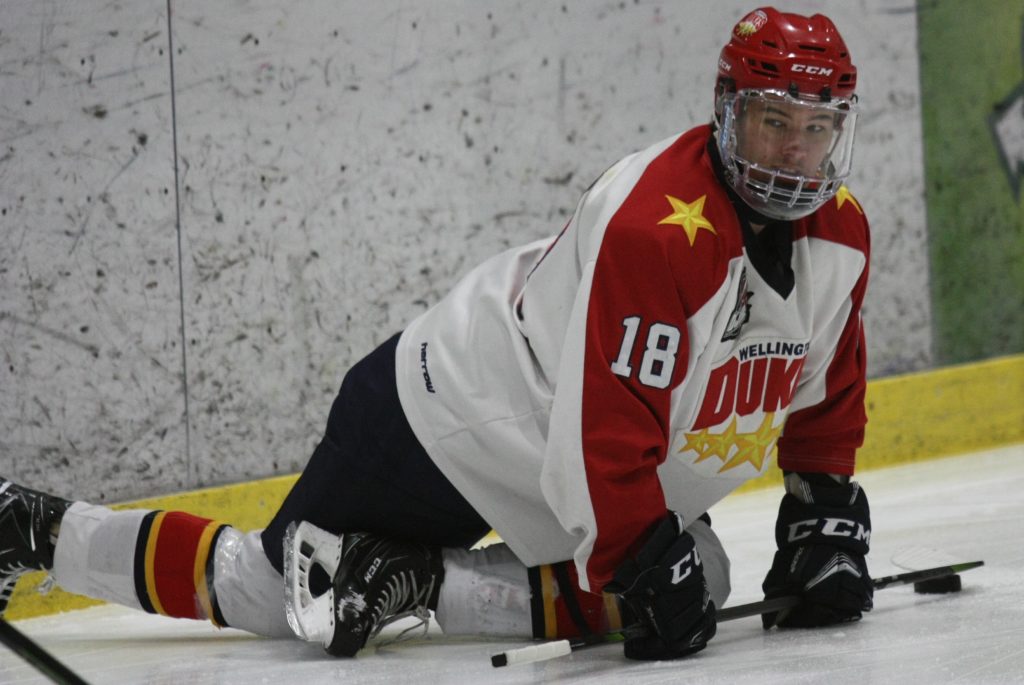 A gut-check 3-2 win in Game 5 propelled Wellington to a series victory that came with an overtime win in Game 7.

After the contest, Supryka admitted he never would have pictured himself back in a Wellington uniform after moving on to a higher level of hockey at the end of the 2014-15 season.

“Coming back, it’s been great to be back at Essroc Arena and see all these great fans. It’s going to be kind of fitting to end my career where it all got started,” Supryka told the Gazette after the Newmarket Series.

There can be no denial the fresh troops have helped Wellington.

Yetman has seven goals in his first eight games in a Dukes uniform while the trio of the Whitby native, Pucci and Supryka have given Wellington head coach John Druce an incredible booster shot of veteran leadership and scoring ability that has allowed Dukes vets Mitch Martan, Colin Doyle and Teddy McGeen to not have to constantly face the top checking lines of opposing teams.

On the backend, Barbeau is exactly what the doctor ordered in much the same way.

His pairing with with Mason Snell has allowed the former Whitby Fury defender to do some dynamic things with the puck and, again, has taken some pressure off of rookies  Zach Uens and Declan Carlile who have responded well to being able to free wheel from the back end.

Finally, and perhaps the most important aspect is the team believes in itself.

A sudden influx of players from outside the Wellington family could have sent entire post season aspirations spiralling but credit Druce for keeping everyone paddling in the same direction despite a cutback on ice time for some players.

“The addition of depth is huge for our hockey club but the presence of Yetman, Supryka and Pucci have both inspired our guys and pushed the entire team to be better,” Druce told the Gazette last round.“There’s an experience factor and all the call up players that have come in can help their teammates by leading on and off the ice and doing all the little things that it takes to win hockey games.”

The result is the Wellington Dukes find themselves in the Buckland Cup finals for the first time in seven years after they dropped Aurora in five games to win the 2018 North East Conference championship.

These OJHL playoff championships seemed to be a familiar location for this franchise a decade ago but lean times at the Essroc have meant the Dukes faithful have had to be satiated with player promotions and the occasional series win.

Not any more, at least not this post season.

Across the ice starting Friday night is an OJHL flagship organization in Georgetown that just finished winning their third straight Southwest Conference title, has one of the finest Jr. A hockey coaches in Greg Walters and, oh yeah, an exOHLer in net in the form of Troy Timpano.

Wellington certainly isn’t meeting a fellow group of neophytes in the form of the Raiders and Georgetown is an experienced hockey team built to win this time of year.

But the Dukes have found out after skating through the top seed Tigers in just five games that so are they.

All this means is local sports fans should get ready for a wonderful series and a throwback to the times when Wellington was the place to watch high-stakes hockey in April. 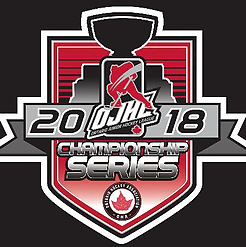 For more information on the 2017-18 OJHL playoffs and schedule, please visit the website at www.ojhl.ca.