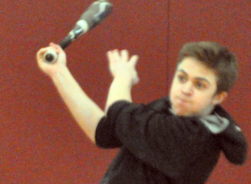 Less than two weeks before the start of the Bay of Quinte Conference baseball season, the PECI Panthers are rounding into form to face what could be their most challenging season in many.

Although teams haven’t been able to get outdoors yet this year, coach Matt Ronan is already predicting the league competition will be much stronger.

“This year, especially, we’re going to face toughest competition. We have four or five guys in Quinte Royals system, St. Theresa has nine. They’re all really good athletes, going on to university ball here and in States,” he said. “It’s going to be fun. It’s not going to be games of 20-0. It will be great for any team, but hope we’re guys to advance. Whoever goes through us, St. T’s, Centennial or Centre Hastings is going to have to be tough.”

Graduation has again taken some key Panthers. Powerful pitcher Max Manlow is gone, as is a calming presence behind the plate, Dan Seguin, who also served as a capable shut-down pitcher. Right-side infielders Ryan Kelly and Matt Dobson also leave huge shoes to fill, but Ronan remains confident in the program.

“We’ve been fortunate to build through the system. For three years, we’ve had guys waiting to take Ryan Kelly’s spot or Matt Dobson’s spot,” he said.

Ronan has high hopes that Ben Wells will be able to take on some of that leadership in the batting order and the field after a strong rookie season last year as a Grade 10 catcher. Wells has been working at a baseball academy through the winter.

Offensively, the Panthers will also rely heavily on fifth-year third baseman Jimmy Kuipers, centre-fielder John McHugh — who often found hits at opportune times last year — and the likes of Jordan Stacey, Chase Lavender, and Walker Deroche. There will also be some opportunity for new Grade 9 and 10 players to get looks, though with a shortened season most might have to wait their turn.

“We’re going to face good pitching this year, offence will win games. We believe our pitching and defence is there.”

On the mound, McHugh will be asked to work more innings. Grade 12 hurler Braedan Kelly was dominant at times last year and Ronan believes he “could have a special year.” Experience Quinte Royals pitchers Will Ronan and Brodie Byford are coming into their own as seniors and Ronan sees them as an effective starter and a reliever who know how to produce in high-stakes games. Dylan Morrow promises to be another intriguing pitcher as Ronan says he’s sneaky and he often is able to find success.

While the Panthers’ pitchers and catchers have been at it since mid-February and the whole team —24 experienced players — has been working three days a week since March Break, the Panthers won’t have the luxury of having as much exhibition play as in previous years.

The early Easter weekend made it difficult to line up a trip to the United States as in past years. If field conditions allow, the Panthers will play Centre Hastings April 24 in a preseason game the day before the regular season opens at the Field of Dreams in Wellington against Nicholson.

Then, the Panthers are hoping to hit the road April 28 to face the Sinclair Celtics from Whitby. Sinclair will host OFSAA this year, so it should be a good challenge. They’ll look to pair that with some team building at a Toronto Blue Jays game.

One thing the coach is excited about is continuing to develop players in the program for post-secondary ball. He said Kelly, Kuipers, and McHugh could all have some interest depending on their personal preferences for school next year.