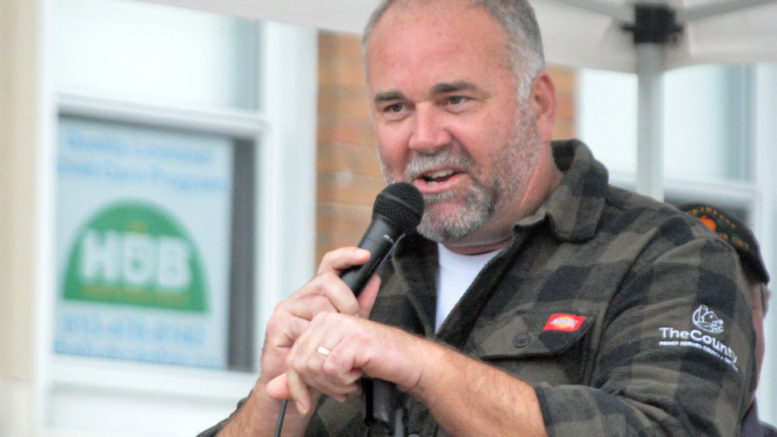 If elected, party would look to replace corporation’s board

Prince Edward-Hastings MPP Todd Smith joined Ontario PC leader Doug Ford in Toronto this morning to announce their party plans to remove the board of directors of Hydro One if elected in June.

They say the threat would force the power distribution company to address the issue of soaring executive compensation it says Ontario electricity customers can’t afford.

Ford stated that since 2003, hydro bills rates in Ontario have tripled.

“It’s the real people who are suffering in this province — the workers, the parents, and the families. You are the ones being stuck paying for a government that doesn’t care about you or your struggles.”

The former Toronto councillor took aim at the power distribution company’s executive compensation. He noted that chief executive officer Mayo Schmidt recently received a $1.7-million bonus (bringing his total compensation to about $6.2 million last year) and executives beneath him got bonuses ranging from $800,000 to $1 million.

“We will fix it. When we’re in government, we’re going to put an end to hydro executives getting rich off the taxpayers of the province… It’s morally reprehensible,” he said. “My first act as premier, we will use every tool at the disposal of the Ontario government to remove the $6-million man and the entire board at Hydro One. We’ll take action to put money back in your hands.”

Pressed by journalists to explain how he was going to effect that change Ford didn’t speak in specifics, instead stating “There’s many tools. Many, many tools.”

Ford directed questions to Smith, who agreed the province does have tools in its toolbox and charged Premier the Liberals did nothing to fix the problem as compensation skyrocketed. According to Smith, in its sale of a portion of Hydro One, the government maintained its right to fire the corporation’s board. That, he said, could send a message the a PC government wants to do things differently.

“What Doug is talking about sends a serious message there’s going to be a cultural change when it comes to the fat cats at the top and the people at the bottom paying more and more.  We can fire the board and make clear to the board we’re not going to accept these bonus packages any more.”

The opposition energy critic stated such a move would send ripples through the broader public sector about the need to hold the line on compensation. It’s a message he says the board at Hydro One hasn’t addressed when even the Ontario Energy Board raised a concern when Hydro One last looked for a price increase.

He also pointed to numbers comparing Schmidt’s salary with those of utilities chief administrative officers in Quebec, Manitoba, and Saskatchewan that show his compensation is more than 10 times what each respective executive makes.

Asked about Ford’s statements about firing Schmidt, Smith admitted the government cannot do that itself.

When Smith was questioned about potential costs associated with the plan, he noted his party does not have details of the contracts in question.