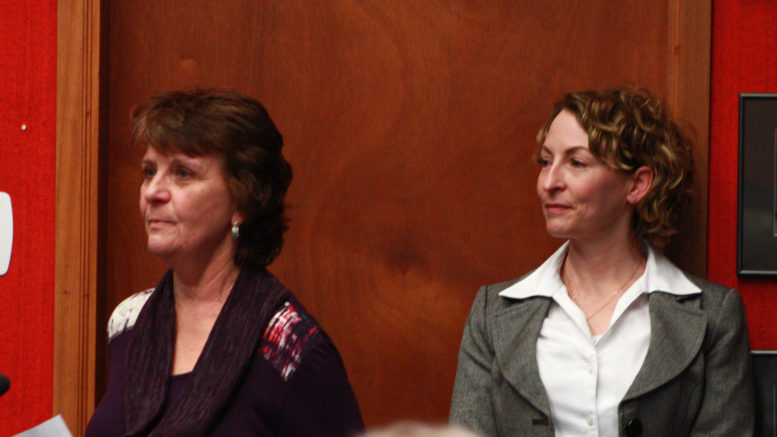 The Prince Edward County Memorial Hospital Foundation is hoping the municipality will take on a greater share of the cost of a new hospital.

During last week’s committee-of-the-whole meeting, foundation executive director Penny Rolinski and board chair Monica Alyea asked councillors to consider increasing the municipal commitment to the project to a maximum of $4.5 million. In 2015, council approved a contribution of $1.25 million over 10 years.

The committee took no action other than to receive the request.

The community share of the estimated $76-million project is currently pegged at $12.7 million. That number roughly works out to 10 per cent of construction costs and 100 per cent of the cost to equip the new hospital.

When the capital campaign figure is added to planning costs and annual fundraising needs, that figure reaches $16.5 million.

Rolinski said to this point, the foundation has received cash commitments and pledges totalling just over $6 million. A feasibility study undertaken for the project found the community could support a capital campaign of $11 million. Rolinski said that means there is a gap that must be bridged.

“As a general trend, campaigns in smaller communities have a larger proportion of their goal from the municipality,” she said.

“Where we desperately need to bring you up to is $4.5 million,” she said. “That brings this municipality in at 27 per cent which I think is fairly average for a community of this size and a campaign of this scope.”

The municipality has 12,600 households. If each were to contribute $52 per year for the next seven years, that $4.5 million goal could be achieved, said Rolinski.

For the foundation, the drive for a new hospital means an added layer of fundraising, the capital campaign on top of normal annual fundraising for equipment. While the Ministry of Health and Long Term Care covers the cost of day-to-day operations, the foundation does all of the fundraising and purchasing of equipment for the hospital.

“If we look at a 10-year average, we purchase about $400,000 worth of equipment for that hospital every year,” she said. “The reason we have to do that is that is mandated by the Ministry of Health, that is the community’s responsibility.”

Rolinski said over the next five years there are some significant pieces of equipment that will have to be replaced.

“Even our business as usual over the next five years is much more serious,” she said. “We have a portable x-ray unit, we have an ultrasound device, digital radiography, and mammography — all of these devices are going to hit the end of their life within the next few years, so that is being built into our overall goal as well.”

The current hospital is beyond the end of its life cycle. Rolinski said the ultimate goal is to take the same services and level of care from the current site into a new setting. The new site would continue to provide dialysis, endoscopy services, and an inpatient unit. What will be added is state-of-the-art infection control.

“In our current building we don’t have infection control that is up to current standards,” said Rolinski.

If, for example, there were a patient with influenza — which is spread through droplets in the air — an open door to one of the current hospital rooms could present an opportunity for the virus to spread. An updated building would include rooms with upgraded ventilation systems which would draw air into the rooms and help ensure potentially infectious air doesn’t escape into the rest of the hospital.

Additionally, each room would have its own washroom and even shared rooms would have a washroom for each patient.

“It’s not just a case of inconvenience,” Rolinski said. “If you’re (in hospital) with something infectious, you don’t want to be using a washroom that other people can use — these are just really simple things we can fix.”

A new hospital would also offer “clinical adjacencies” meaning departments can be located in such a way that they can be accessed by healthcare professionals more quickly and easily. This ensures services are delivered more efficiently.

“There will be much improved flow with the new hospital we’re planning,” Rolinski said.

Rolinski said the county’s population is projected to increase to 34,755 full-time residents by 2032. By 2026 it’s anticipated that 28 per cent of residents within the South East Local Health Integration Network (SE LHIN) catchment area will over the age of 65.

Underscoring the importance of council’s financial support, she suggested this project would be the only complete hospital rebuild that will take place under the Quinte Health Care umbrella in the near future and is one of the only small hospitals in the pipeline.

She said one of the reasons the hospital is even in the pipeline is because of the massive amount of advocacy and work that has gone one behind the scenes. Another is the county’s profile.

“People know about Prince Edward County and I think that’s why we’re in the pipeline,” she said.

Alyea said council is facing a crucial decision when it comes to its hospital contribution. She encouraged councillors to think of themselves as a legacy council and said the County must be a major financial partner in the once-in-a-lifetime undertaking.

“The last County council that made a decision like yours, the one you’re going to be considering about a new hospital in the county, got written up in a history textbook,” she said.

That council was the one that committed a quarter of the community share of the building cost of the current Prince Edward County Memorial Hospital, she said.

“That’s what we’re here to ask you for today,” she said.

I see you as a legacy council, deciding to move this project forward and that’s how important your decision is. The next council will put it in the budget and the following council will get to cut the ribbon hopefully, but you are the legacy council — you start the ball rolling.”