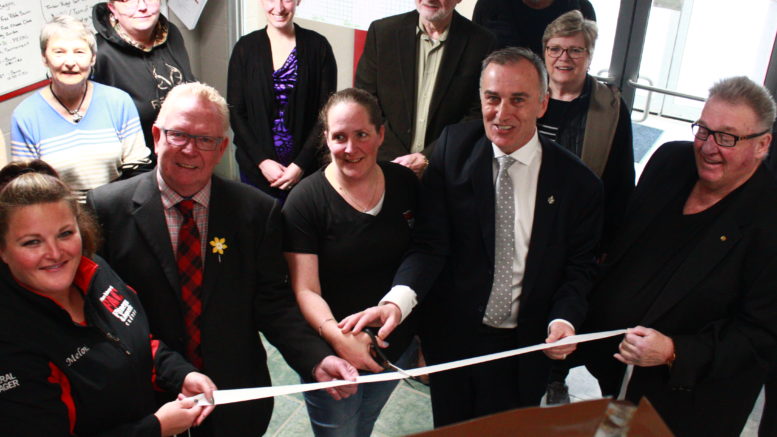 The Prince Edward Fitness and Aquatic Centre (PEFAC) celebrated the completion of its newly renovated lobby on Friday.

The $80,000-upgrade included new accessible doors and overall improvements to the lobby and reception area. The upgrades will boost the building’s security and make it more energy efficient.

The project was completed with funding from the municipality, the Ontario Trillium Foundation (OTF) and $40,000 from the federal government’s Canada 150 Community Infrastructure Program.

PEFAC president and board chair Bill Halman thanked the municipality, OTF, and the federal government for their contributions to the project, which helped ensure the entrance is open to all.

“Your money has helped us provide an accessible entrance at PEFAC and redevelop our lobby, offices and signage so they are a welcoming and efficient space,” he said. “The past four years have seen major improvements at PEFAC with over $200,000 in capital grants from senior levels of government and the Parrott Foundation.”

He said the grants were leveraged with the help of the County’s four-year funding commitment to the facility.

“We’re very proud of what we’ve achieved here at PEFAC,” Halman said, noting the organization now covers 85 per cent of operating costs through earned income. “A strong core of volunteers, hardworking staff, a growing number of users, and the support of Prince Edward County have been crucial to our success. We will continue to serve all residents of the county regardless of physical, economic, or social barriers.”

PEFAC general manager Meloni Crandall said the not-for-profit organization strives to promote and support the health of the community. She said the grants also helped PEFAC increase the size of its lobby and service area.

“This renovation has created easier access for all members of the community, as well as reduced cost through energy efficiency,” she said. “We thank the Canada 150 granting organization for their support while we provide a more accessible front entry and reception area for our many users.”

She said PEFAC’s membership has grown continually over the last few years and the renovation allows the facility to offer better service to county residents.

Bay of Quinte MP Neil Ellis said the grant funding is all about building and supporting communities.

He also noted the importance of PEFAC in helping the island’s residents learn to swim.

“When you look at what we built here and what that amount of money provides, it could save a life,” he said.

The $300-million Canada 150 Community Infrastructure Program was established to support projects to renovate, expand, and improve existing community and cultural infrastructure across the country.

Mayor Robert Quaiff said the municipality has had a relationship with the facility for more than a decade. He’s heard the merits of funding the facility debated through many budget cycles.

“I’ve sat around that horseshoe for 13 or 14 budgets and the conversations over that period of time have become a lot smoother, there’s a lot better understanding,” he said. “I think, in particular, this council actually gets it when it comes to the health and well-being of the community — especially with the senior population.”

During those budget discussions, Quaiff said he has consistently considered PEFAC a healthcare provider. He said it was great to see funding from upper levels of government helping to better the community.