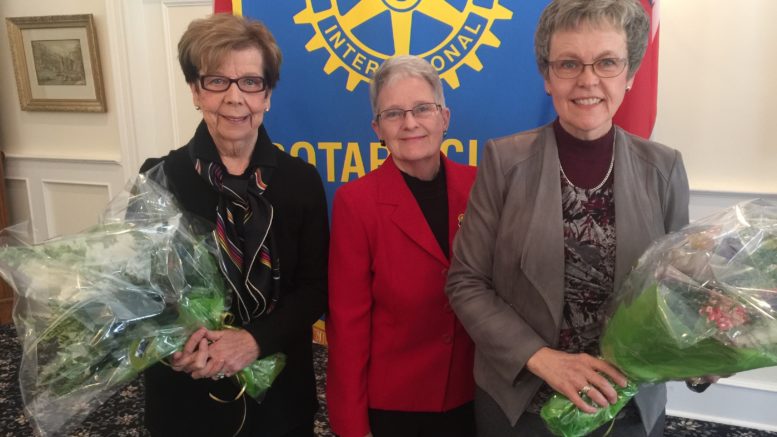 A pair of local women have been honoured by the Rotary Club of Picton with 2018 Paul Harris Fellow award pins.

Arlene Wright and Doris Stuart were presented with highest form of recognition that Rotary clubs can award either members or non-members at the local service club’s weekly meeting on Tuesday at the Waring House.

In presenting Wright with her award, Rotarian Richard Byers recalled the words a fellow (while fictitious) legal mind in the late Raymond Burr who told a beleaguered individual sick of his mounting responsibilities that “Those that can, do.”

From helping Rotary exchange students learn english to the several charity and community groups she’s donated time and effort to, Wright has been ‘doing’ for the betterment of Prince Edward County for many years.

“And she’s not afraid to get her hands dirty,” Byers said. “on her own time with her own money for years now, she’s maintained about a dozen flower beds and countless flower boxes in Picton. She makes our community a much more enjoyable place.”

Robert Stuart passed away in August of 2017 and was a deeply respected member of the Rotary Club of Picton who’s efforts and volunteer hours to the various causes of for the local club and Rotary International are to great to mention.

He was able to fight the good fight. If love could have saved him, he would be here with us today,” Member Robert Bird said. “Bob passed the four-way test in many ways as a husband, father, grandfather and outstanding Rotarian. He was an outstanding person in all these areas.”

“From the first day that Leo Finnegan mentioned the Rotary Club of Picton to Bob to the day of his funeral, you people were there in his life. He was very committed to Rotary and the motto of service above self and we saw that everyday, not just the special work that gets in the paper but all the stuff that gets done for the community behind the scenes,” Stuart said of the positive impact Rotary made on her late husbands life.

“Many visits and phones calls and rides to rotary lifted his spirits more than you know. I thank you for this wonderful recognition and the beautiful remembrance,” Doris Stuart said.