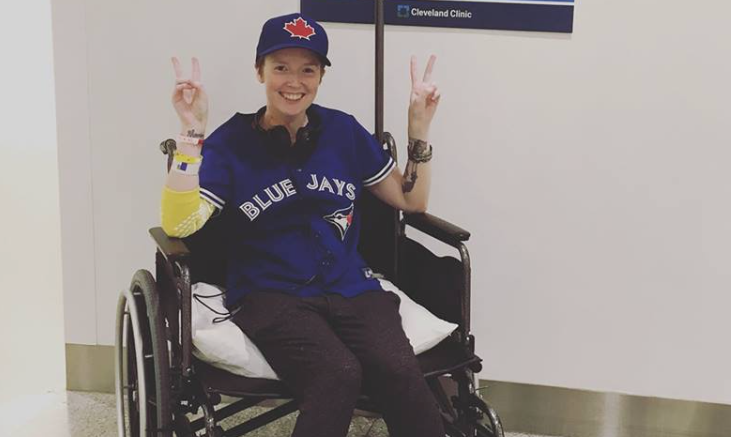 The Picton-area women underwent a nine hour procedure earlier this month to correct a severe case of intestinal malrotation that’s only offered at the Cleveland Clinic.

While her progress continues to be monitored by a medical team, it’s believed the re-placing of her organs and the elimination of suspect parts of her digestive track has been a success.

Taylor told the Gazette via e-mail from her recovery room in Cleveland that the first few days were incredibly hard but she has seen incremental improvement each day.

“I found you really improve faster if you get up as soon as you’re safely able to and walk,” Taylor said. “It took a little while for my intestines to ‘wake up’ but the clear fluids diet has been going well so I will be starting more of a full fluids diet to see how that goes. I am still being supplemented by IV nutrition until I am able to support the proper nutrition intake on my own orally.”

It was just over two months ago that Taylor’s parents, Keith and Valerie, made their adult daughter’s life-threatening condition public.

Once an educator with a promising career in the Calgary school board, Andrea Taylor was forced to leave her job and return home and into the care of her parents at the age of 30.

Due to the rarity of Taylor’s condition, finding treatment was difficult and the severity of the symptoms of the  malrotation increased to the point where the young woman had to be placed on IV nutrition.

The Cleveland Clinic is believed to be the only hospital in North America where the corrective procedure is offered but Ontario’s public health safety net declined to cover the cost of the out-of-country surgery despite Taylor’s condition growing more grave with each passing day.

The local community sprang into action and, within six weeks, the $175,000 needed to cover the cost of the operation was raised through a crowd-funding campaign and local fundraising events.

Taylor said her care at the Cleveland Clinic has been top notch.

“The entire surgical team, doctors, dietitians, anesthesiologists, nurses, nursing aids, physiotherapists, housekeeping and custodial staff have been absolutely amazing – going above and beyond to help and doing things to make your day a little brighter. They even have reiki and aromatherapy support to help with relaxation and sleep, which was pretty cool,” She said.

Patients suffering from malrotation from all over North America and the world come to the Cleveland Clinic to be treated by Dr. Kareem Abu-Elmagd, a pioneer transplant surgeon.

“The floor I was on also had a bit of camaraderie between patients, if you were having a hard time trying to walk through the pain other patients farther along in their recovery would make sure to stop and give words of encouragement. While this has been the hardest thing I have ever endured, it really has been a wonderful experience with significantly noticeable improvements to my health already,” She added.

Taylor has been keeping those interested in her progress up-to-date through social media postings but wanted to make sure supporters in Prince Edward not connected to her via facebook or twitter knew the difference they have made in her recovery efforts.

“My family and I cannot thank everyone enough for their help and support to get us here and the words of encouragement we received through social media the days following the surgery really helped motivate me. I really felt like I had the whole county cheering me on,” she said.