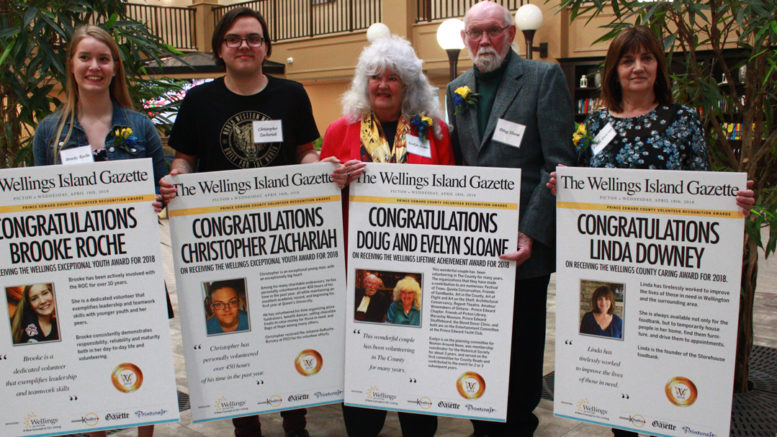 Doug and Evelyn Sloane were recognized for their long service in varied volunteer capacities over many years with a lifetime achievement award at the Wellings Prince Edward County Volunteer Recognition Awards luncheon yesterday.

Whether it was arts and culture, nature, winemaking,or wellness, the couple has been giving selflessly to their community for 22 years. With the Friends of Sandbanks, Evelyn was thew newsletter editor and membership co-ordinator for many years, while Doug served as chair for four. They also co-founded and organized the Scenes of Sandbanks fundraising art show for many years.

Since 1996, both have participated in the organization of Art in the County, serving separate terms as co-chair. Evelyn also co-ordinated volunteers. The Friends of the Picton Library is another long-term shared pursuit of over 20 years. Doug is currently chair and Evelyn secretary. They have organized countless book sales and fundraising dinners.

The Sloanes have also been volunteers and co-ordinators with the annual Festival of Trees, executives of the local Amateur Winemakers of Ontario chapter for about eight years, and are current directors for the Friends of Macaulay Museum and the Prince Edward Shuffleboard Club. Both serve as ushers and concession volunteers at the Regent and are on the entertainment committee at the Prince Edward Yacht Club. Clearly, service is a way of life.

For 11 years, Linda Downey has poured her life into Wellington’s Storehouse Foodbank and that has earned her this year’s Wellings Caring County Award.

Downey moved to the west end of the county in 1992 and she and her husband, Robert, a volunteer firefighter, actively became involved in as many volunteer capacities as they could. She listened to stories of families struggling and was concerned that a drive to Picton or Belleville seemed out of reach. Her family started Storehouse and the registered charity located at Wellington Pentecostal Church has grown ever since. It provides over 370 people food every month and has expanded its offering from non-perishable to fresh foods. Food and nutrition education is also offered.

Storehouse also provides toiletries and has taken on a host of community services, including collecting furniture and clothes for those in need, providing a backpack program and offering Christmas hampers. With all the growth, Downey finds herself working more than full-time hours as a volunteer.

Her nominator, Art Hewer, said Downey has made a real difference to his community.

“Linda has tirelessly worked to improve the lives of those in need in Wellington and the surrounding area. She’s always available, not only for the food bank, but to temporarily house people in her home, find them furniture, and drive them to appointments,” he said.

John Ferguson was nominated in the Caring County category. Nominator (and past recipient in the community builder category) John Mather indicated Ferguson gives his time selflessly as a board member and volunteer for 99.3 County FM and a board member for Community Care For Seniors. Ferguson has also served as a past director of the South East Local Health Integration Network and Quinte Crimestoppers.

Musician Rob Johnson and his band, Rough Around The Edges, also received a nomination for the Caring County Award. The band has visited Community Living Prince Edward each month for three years to share its music with others.

Roche has been actively involved with the Recreation Outreach Centre for more than 10 years. The executive director there, Darlene Thompson, says she “exemplifies leadership and teamwork skills with younger youth and her peers. Brooke consistently demonstrates responsibility, reliability, and maturity in both her day-to-day life and volunteering.”

PECI teacher Greer Koutroulides said Roche is active at the school, too, volunteering for Hoops for Heart, the food drive, the Christmas Angel Tree campaign, OneMatch, the Terry Fox Run, the Salvation Army auction, and elementary sporting events. She also has given over 305 community hours at the ROC, Relay For Life, Vacation Bible School, and the Women’s Institute Craft show.

Nominator Lynda Westervelt added Roche has given her hair to Angel Hair For Kids and raised $900 for that cause. She’s also played soccer, rugby, volleyball, and track and field at the school and in the community and has often been named captain by her peers. She has won ribbons at the fair for her baking, photography, and art. She said Roche is very community minded.

“Brooke attacks problems from a positive angle whenever she is able to do so,” Westervelt indicated. “She will always deal with things the very best way she knows how and for the most part, she is rewarded with great results. Brooke has worked through and successfully overcome some difficult life situations on her journey thus far. She is well liked and well respected by her peers and others in her life.”

Zachariah has put in over 450 hours this past year alone volunteering and raising money for local charities, all while attending Queen’s University, nominator Amy Russell indicated. Through his efforts working for Bag For Hope, he has helped raise thousands of dollars for people right in Prince Edward County in need.

Fellow nominator Cathy Bunnett called him “driven and determined,” while a third nominator, Danielle Jolly, called him “one of the most caring young adults I know.” A project dear to Zachariah’s heart has been the Bags to Hope program his family started to provide comforts and supplies for those travelling outside of the county for medical treatments. Related initiatives have also provided backpacks and supplies for local school children and Christmas hampers.

Nominator Brenda Sokolowsky added the student who intends to attend medical school graduated PECI with high honours and is willing to help his community in many ways, ranging from organizing pizza fundraisers, to helping with benefit dances, to standing in the cold to sell chocolate bars.

Katherine Reddick also received a nomination in the youth category. The PECI student started volunteering when she was at Queen Elizabeth Public School, helping with breakfast club, lunch, and the school carnival. She also served as a school mascot — an activity she’s continued at PECI. She also has helped with orientation. Outside the school, Reddick has given over 400 hours to H.J. McFarland Memorial Home. She volunteered with activities, resident and family events, and in the kitchen. For six years, she’s been a fundraiser and participant for Relay For Life. Also, Reddick is part of the ROC’s Club ROC, Camp ROC, and youth advisory committee programs.

“Katherine is a kind and caring young lady that shows up to volunteer on holidays, weekends, and days off school. She has stepped up to the challenges of a long-term care home and exceeded and progressed as a fine young lady with workplace experiences due to her tireless efforts.”

Past winners Serve as judges

The nominations this year were evaluated by a panel of last year’s winners, including Jean Algar, Don Roberts, and Lisa Zachariah.

Zachariah recused herself from deliberations on the exceptional youth category as Christopher is her son.

Each category winner will be able to select a charity to receive a $1,000 donation from the Wellings of Picton. The prize will be split in the youth category. No nominees were received for the Community Builder Award.

With the awards program now in its third year, Wellings of Picton general manager Rachel Henry says her organization believes has become an important program to continue to present.

“At the Wellings of Picton, volunteerism is near and dear to our hearts. Most of us have volunteered over the years, and many of us have seen the impact a volunteer can make in our lives,” she said. “Our motivation behind the Prince Edward County Volunteer Recognition Awards is to raise awareness about the importance of volunteers in our communities, and hopefully encourage more people, who may be thinking about giving some of their precious time, to take that step to being a volunteer, no matter how big or small the contribution.”