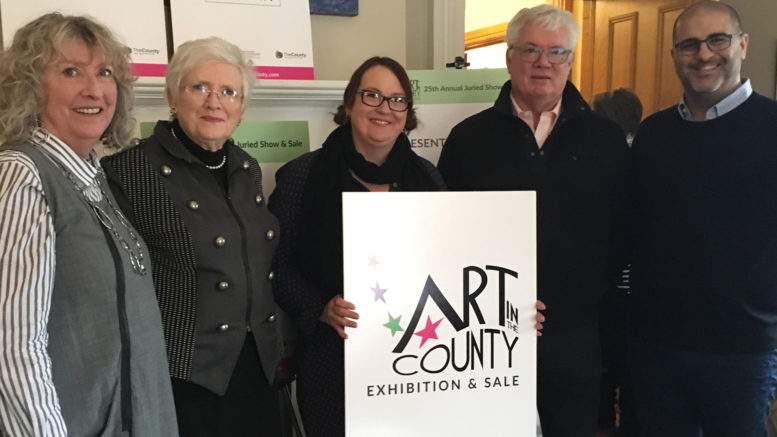 Local arts showcase to move to The Armoury this summer

After a quarter century, there’s still room for the new at Art in the County.

Going into its 25th year this summer, the Prince Edward County Arts Council’s signature exhibition has showcased more than 2,000 pieces, attracted over 50,000 visitors, and facilitated over $280,000 in sales for artists in the community. Each year, patrons look for something different.

The show’s current chair, Sue Barclay, says it’s a telling sign that Art in the County delivers on that.

“It always happens. Every year there are people that are new that we’ve never heard of before and that’s what makes it exciting and lasting for 25 years. If you don’t have constant input and new creativity, it just wouldn’t work.”
It does, however, because of a vibrant arts community.

“It just speaks volumes, I think, about the talent that exists in this area. There are very few small community shows that make it for 25 years. It speaks to the commitment of people who want to have a show like this and the talent of the artists.”

As this year’s exhibit — running from June 22 to July 8 — draws near, art aficionados will notice two significant new developments. One is a change in venue to The Armoury. The other is a tribute to the community that keeps the show vibrant year after year.

Barclay said the organizing committee was in a bit of a tough position after learning last year the building housing Books & Company was sold and the popular second-floor Lipson Room community space was about to undergo some changes. It meant the juried event would be searching for a new home for the first time sine 2012. Choices seemed few and far between.

“We’re really sorry to lose (the Lipson Room),” she said. “When it became obvious that was not viable, we had to look for a big enough space.”

The committee looked to Picton Town Hall, the former site of the exhibition but its future still remains uncertain and many community groups rely on it. Initially, they weren’t certain if a remodelled Armoury was going to be ready in time but eventually learned it can accommodate the show.

“We’re going to have a space on the ground level, not the street level,” said Barclay. “It’s a beautiful space.”

By measuring the square footage and wall space, organizers think curator Claudia McCabe will have space to include as many of the jurors’ choices, if not more.

At the opening reception, June 21, Art in the County will also hand out the new Community Art Builder Award in celebration of its anniversary. Sponsored by Chestnut Park real estate agents Laurie Gruer, Sam Simone, and Monica Klingberg, the award will recognize an individual who has enriched community life through the arts.

“It doesn’t have to be an artist, it could be a teacher, a patron, or an event organizer. Anyone where there’s a possibility that person has somehow enriched our lives.”

Nominations are open online at www.artinthecounty.ca. Also there, artists can submit their entries for jury consideration. Submissions for both are due by June 8 at noon.

The jurors will be Wendy Cain, a print maker and paper maker who was past chair of printmaking at OCAD University in Toronto, Daniel Hughes, a OCAD and New York Academy of Art trained portrait artist from Kingston, and Olexander Wlasenko, an artist who has exhibited internationally and the curator of Whitby’s Station Gallery.

“It’s a very difficult job for them to decide the pieces to include,” Barclay said, adding the jurors often set the tone for the event that is to come.

Ameliasburgh councillor Janice Maynard offered congratulations on the Art in the County milestone.

“This longstanding event not only showcases our artists’ work, but it draws many visitors and enhances the cultural lives of all our residents. It’s amazing,” Maynard said. “We want to wish you luck with this year’s show and I look forward to attending this year to view the many varied art forms created by the vast amount of talented artists from all around the county.”

Maynard shared a personal anecdote of how much the show meant for a friend of hers from Consecon whose work was selected for one of the earlier exhibitions in Art in the County’s run. He’s still creating about 20 years later.

“While many of his friends always considered him as an artist, the selection was a huge accomplishment for him and a confidence builder. The recognition and sale of his piece really encouraged him to carry on in his creative endeavours.”