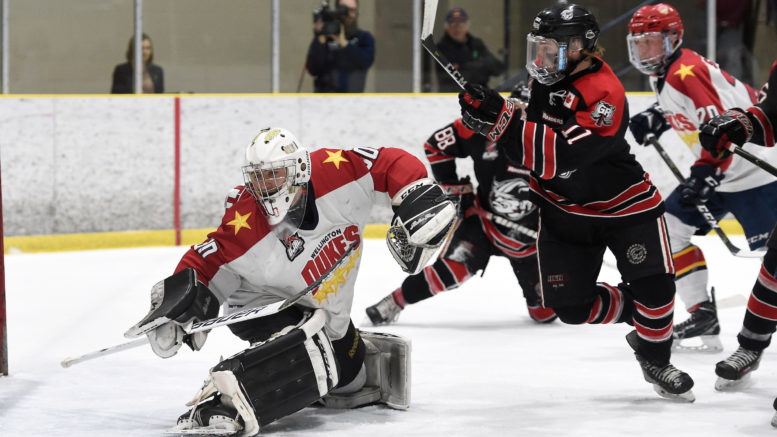 There can be no value attached to playoff experience when it comes to junior hockey simply because its too invaluable to measure.

The Wellington Dukes are finding this out as the Georgetown Raiders have flexed their veteran muscles in back-to-back games to even the 2018 Buckland Cup Finals at 2-2.

Looking to hold serve and take a 3-1 series lead at Essroc Arena Thursday night, the host Dukes did their part and played a solid game- at least for the first 30 minutes or so.

After a scoreless first period where the Dukes held the Raiders at bay, Wellington opened the scoring just under nine minutes into period two when Jackson Arcan cruised through the slot area and deposited a Ben Evans rebound past Raiders net minder Troy Timpano for an early 1-0.

Wellington was wise to limit their penalties in Game four after giving up six power play goals in Game 3 but the Georgetown juggernaut was lethal when given the man advantage Thursday.

An ill-advised pass to the vicinity of the Wellington bench while the team was in the midst of a line change led to a Georgetown Raiders opportunity in which Matt McJannett banked one off Wellington starter Jonah Capriotti at 11:09.

Another power play opportunity and another McJannett strike just under two minutes later gave the visiting Raiders their first lead of the contest.

Wellington would tie it back up at 2-2 when Andrew Barbeau’s point blast beat a partially screened Timpano at 14:20 but then the roof caved in on Wellington in the final moments of second stanza.

Three Raiders goals in the final five minutes including McJannett’s hat trick effort and an Andrew Court back-breaker with ten seconds left in the frame gave the Raiders a 5-2 lead through 20 minutes.

If there was any life left in the Wellington effort on Thursday, it was quickly extinguished in the third as McJannett potted another goal just 22 seconds in.

The score was finalized just over a minute later as the Raiders threw the puck around the Dukes end at will before Dirk Stadig was left all alone for a three foot tap in for the Raiders’ seventh strike of the evening.

Wellington will look to rebound after back-to-back lopsided losses on Saturday when they travel to Alcott Arena for Game 5.

The Dukes will return home to face the Raiders in Game 6 on Sunday with the Buckland Cup in attendance as one of the two clubs will have their first chance to clinch.