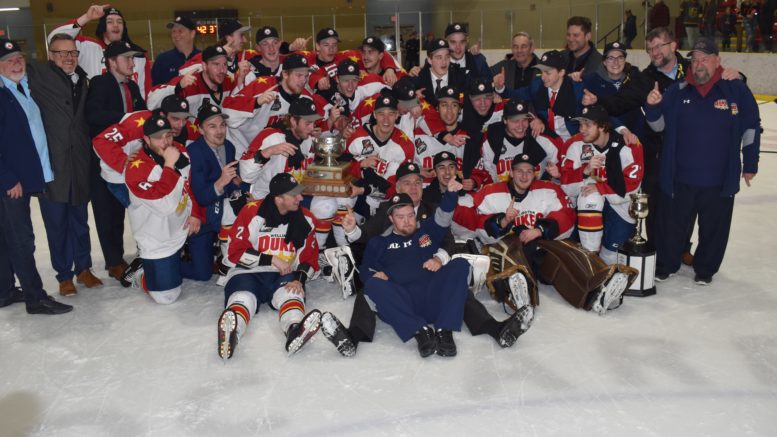 What a strange, long journey it’s been for the Wellington Dukes’ faithful.

That could describe the past 12 months or the past seven seasons depending on your perspective.

The local Junior A outfit finds itself residing at the penthouse of the OJHL today after taking down the Georgetown Raiders in Game 6 to capture the organization’s first Buckland Cup crown since 2011 and third post-season provincial junior hockey title overall.

It had been since the playoff run of 2011 that Wellington had even made an appearance at a Buckland Cup finals and playoff round victories, which seem to come the Dukes way in scores between 2001 and 2011, all but dried up.

The hockey club marked success by maintaining it’s sterling reputation of developing players for the next level but that on-ice success that made the club a flagship organization a decade ago took a back seat in recent years as the OJHL became somewhat of an arms race where the Dukes were a reluctant if not unwilling participant.

But that playoff frustration was washed away this season with a successful club that was built around top-end talent-both up and coming and experienced- as well as a good section of local and regional players native to the Quinte area.

And in these days of wine and roses following a Buckland Cup triumph, it shouldn’t be forgotten who built this hockey in six short weeks prior to the 2017 training camp.

Even the oft-discussed reinforcements of Bryce Yetman, Andrew Barbeau and Josh Supryka and Frank Pucci (The latter two who scored three of Wellington’s four goals Sunday night in a Game 6 overtime thriller) from the Junior B ranks were agreed upon under Woodward’s command earlier in the regular season and the 2018 Buckland Cup has the Picton native’s fingerprints all over it.

Another person that’s been dedicated to the Dukes cause this season is club president Michael Mulvihill who was an incoming partner in 2011 and then had to wait until 2018 to hoist his own Buckland Cup.

And it’s not hard to forget, after the sudden resignation of long time Dukes coach and general manager Marty Abrams last spring, Mulvihill wasn’t even sure if there was a way forward with this team in this community.

“(Tonight) is very, very special for me because we had to literally reinvent the entire team with all the changes that were happening and we were searching for direction and we had no idea where that would be,” Mulvihill said as players and staff paraded around with the Buckland Cup in front of adoring fans.

Ken Clement would be the local person that could back the team and wanted to keep the club in Wellington and, with guidance from incoming Vice-President Randy Uens, the club started moving forward.

But even with the best intentions back in early August, it would have been hard to imagine such a Ontario championship culminating Sunday night.

“We kind have come in a complete circle with bringing in John Druce as coach but this championship wasn’t something that I anticipated at the start of the season,” Mulvihill said.

As for Frank Pucci’s Buckland Cup winning tally in overtime, the club president had stationed himself standing on a milk crate at the end of the Wellington bench.

“It’s the closest I could ever get to lacing up the skates myself and the moment, for me, can’t be explained in words,” he added.

Clement said Sunday’s victory was a leap ahead for the organization which had set from long term goals for playing, winning and hosting major hockey championships in the next few years.

“We had a plan that was a three-year plan and we were going to build our team with younger players and support them throughout the year and they would lead the way in three years time but no, I didn’t think this was possible,” the Dukes owner said of the 2018 triumph.

Clement has been impressed with the turnouts in Wellington as the Dukes averaged 788 patrons in 13 home games and hit a high in Game 4 of the North-West Conference finals with 1,128.

“It’s a credit to the community for supporting us this playoff run and I’m ecstatic about that support. When I got involved with this team, there’s never any thought of having the team anywhere else. I want this team to be here for the next 40 years and getting that support from the locals was incredible. Hopefully they loved the brand of hockey they saw this spring and appreciate it,” Clement said.

“It’s the same feeling that comes back whether you are a player or an owner, it’s an incredible feeling and I can’t wait to see what’s next for us in our first year as we take a run at an RBC,” Clement added.