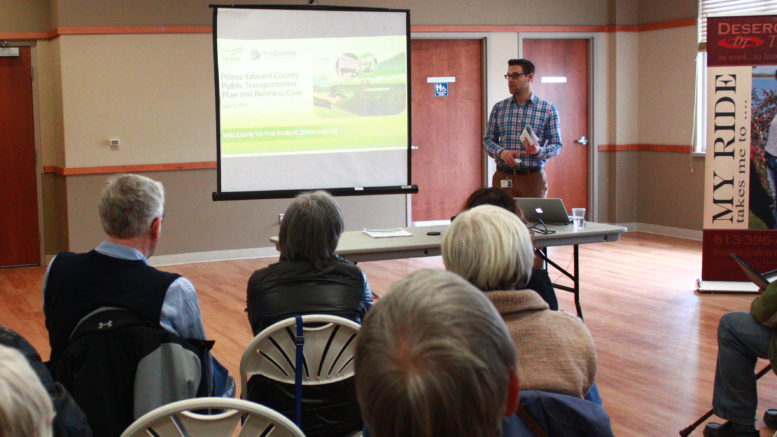 The County is working with community partners to expand local transit options.

An integrated public transportation plan and business case were presented to the public during a pair of open houses held in Wellington and Picton on April 19.

More than 20 residents attended an afternoon open house in Wellington where County community development director Neil Carbone explained the plan was the product of a lot of co-operation and collaboration between a number of local stakeholder groups. Those included the municipality, the County Foundation, Quinte Access, Deseronto Transit, Community Care for Seniors, United Way, and the County Foundation’s Vital Signs working group.

There are few transit options in the county. Deseronto Transit operates four daily routes that loop through Picton, Bloomfield and Bellville at various set times. Quinte Access offers specialized transit to clients with disabilities and seniors on an on-demand basis.

The proposed transit service strategy has five guiding principles, the first of which is to provide mobility options to all residents of Prince Edward County. Improving connections to seasonal employment opportunities, making use of existing transportation resources, providing a sustainable and cost-effective service, and building the service incrementally were all hallmarks.

“You can have a grand plan but, with something like public transit, you do it in stages and then you make adjustments as you go and then you roll out things as people become aware of the service, as your fare revenue increases, as your ridership increases,” said Carbone. “This is not about rolling out a complete new plan on day one.”

The plan includes four recommended strategies that would be rolled out over a five-year period.

The first strategy would see the development of an integrated on-demand rural transit service. The concept would see Quinte Access make on-demand trips for all residents.

On the assigned day of the week, anyone living in one of these zones could call Quinte Access to schedule a pick-up and be dropped off within one of the transit hub areas. Further, Quinte Access’ scheduled routes from Picton to Trenton, Rednersville to Belleville, and Wellington to Picton would also be opened to all members of the community.

The second strategy is to improve integration and inter-municipal connections to Belleville. This would see the existing Deseronto Transit service in Belleville and Picton streamlined to allow seamless transfers with Belleville Transit at no additional cost to the rider.

“This does propose some harmonizing of fares and integrating the service with Belleville Transit which is really important,” Carbone said.

The third strategy is to improve local connections within Picton by providing a weekday shared-ride on-demand service that would use local taxis or Quinte Access vehicles. There would be a daily schedule and riders would call to book their trip at least one hour in advance of the requested arrival time. Carbone said research has indicated the town is where the bulk of the transit need lies.

“We integrate the taxis on a semi-scheduled basis and they would be able to pick people up and you would simply call ahead knowing that it would be around one of these set times,” he said. “You would be picked up at your place of residence and brought to connect with one of the main routes — either Quinte Access or Deseronto Transit — that was leaving from a designated stop or hub in Picton.”

Under this concept, riders would be able to take advantage of fare harmonization with the taxis.

“You’re not paying the full price of a taxi fare to do that, you’re paying the subsidized rate,” Carbone said.

The fourth and final strategy will seek to address weekend seasonal employment needs. This would extend integrated on-demand service during weekends in the summer. As an example, Carbone said the service could connect Belleville and Picton to Sandbanks Provincial Park, which has high employment during the summer.

“The main point of this is we’ve built into this schedule the ability for Deseronto Transit to make an additional stop on weekends during peak season to assist with getting employees to where they need to go in the county,” he said.

The municipality currently contributes $15,000 each year to Deseronto Transit in order to offer that service here. The municipal share of Quinte Transit costs are paid using the municipality’s gas tax dollars. Carbone suggested the new integrated plan could increase the County’s transit expenses to $175,000 annually.

There are several ways that cost can be offset. It’s anticipated the expanded local service would operate with a 40 per cent revenue to cost ratio, which he said would be very good compared to similar systems elsewhere in the province, Carbone said. He said provincial gas tax funding increases based on transit ridership and this investment in transit is expected to double ridership in the county.

Additionally, it was announced in late March the municipality would receive up to $131,203 over the next 10 years for public transit as part of a new joint infrastructure program between the provincial and federal governments.

The next steps following the open houses are to finalize the plan and present it to County council.

“Assuming we get approval and we find some funding to move ahead, we’re ready to begin to roll this out as early as late 2018,” Carbone said.

In crafting the transit strategy, Carbone said the project’s steering committee approached it from a business perspective. The business case contemplates the improvements to local public transit will support the county’s growing tourism industry and improved connections with Belleville would provide access to amenities, employment, and education. It would also improve the quality of life for residents without access to a private vehicle.

“There needed to be a viable business case for public transit, especially given that Prince Edward County is a large geographic area, it’s sparsely populated,” said Carbone. “There are a lot of people living in rural areas spread out so we don’t have a lot of obvious hubs or places where a lot of our population can connect to main routes.”

He said that also meant the service would have to be affordable as the expansion would require an investment of public dollars.

The presentation also involved proposed schedules and routes. The entire strategy is expected to be posted on the County’s website.