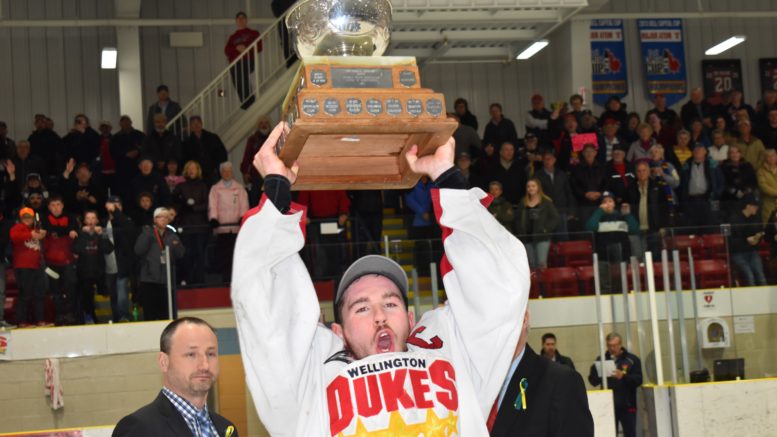 For the record, Frank Pucci had heard of the Wellington Dukes long before he became a Prince Edward County hockey legend Sunday night.

The Sault Ste. Marie native had toiled in a few different leagues and was one of the four reinforcements from the Greater Ontario Junior Hockey League that arrived just hours before an elimination game in Wellington during the second-round series against Newmarket.

But even in his wildest hockey dreams, Pucci admitted that he would have never dreamed of putting on a Wellington Dukes uniform let alone scoring the one of the most dramatic goals in franchise history.

“I pay attention to junior hockey so I knew about the Wellington Dukes and had heard of them before but I had no clue I would ever be playing here when my season started,” Pucci told The Gazette. 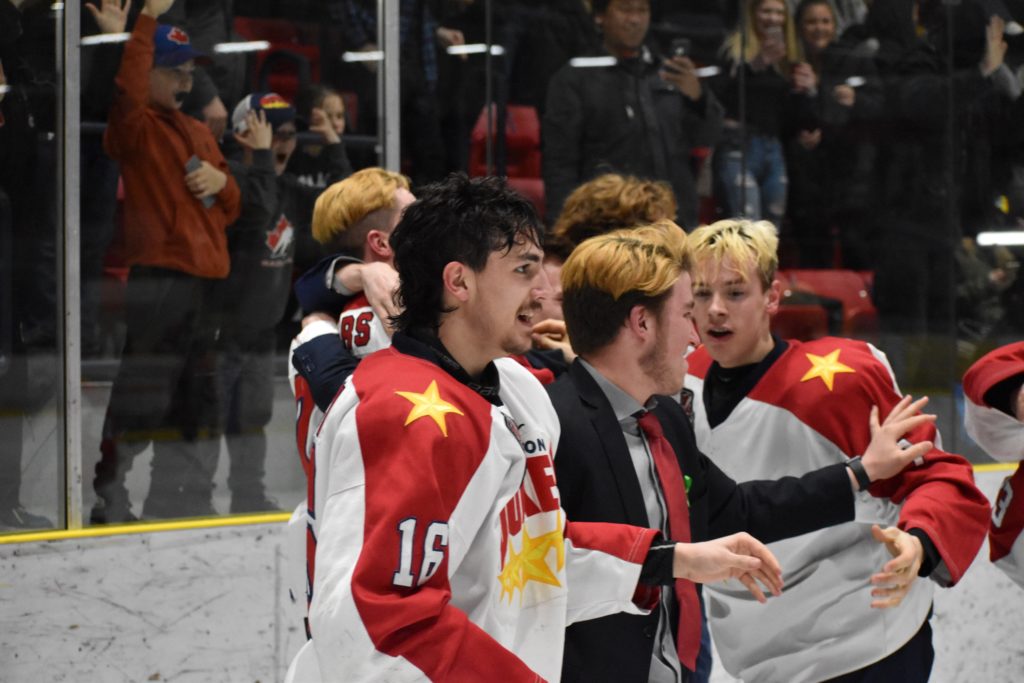 It would be Pucci onetiming a tricky Ben Evans feed originating behind the net from just inside the face-off dot 8:19 into overtime.

For Georgetown Raiders netminder Troy Timpano who was looking to see if Wellington’s best puck dispenser was going to emerge from behind the cage, Pucci’s effort was a radio shot.

The puck was behind him and he heard the crowd as the Wellington faithful started to roar in appreciation of Wellington’s third Buckland Cup championship in the franchise’s history but Timpano never saw the effort that eliminated the Raiders.

Pucci admitted he had an idea the puck was coming his way when Evans stalked behind the Georgetown net.

“He’s pretty creative and a really smart player so I thought a pass might be coming to me there,” Pucci added.

A Duke for just six weeks, Pucci gave credit to the organization and the fans which totaled over 1,100 Sunday night.

“It’s been unbelievable, the team is great and this has been an awesome month and a half and I look forward to the next month,” Pucci added. “This is an unbelievable memory and I was happy to be here and be a part of this organization.”

The effort put a bow on a fantastic Ontario Junior Hockey League playoff run by Wellington, especially after a pair of dramatic games this weekend.

Prior to taking Game 6 at Essroc Arena in overtime 4-3 Sunday night, the Wellington Dukes bucked the odds and took out the Raiders at the Gordon Alcott Arena on Saturday night in a gritty 3-2 game Game 5 that saw the locals bend but not break down the stretch.

Wellington would fall behind in both games only to come roaring back in the second and third periods which has been their modus operandi for many of these playoff contests.

On Saturday, the Raiders would open the scoring with a disputed high stick goal by Andrew Court just over three minutes in but a determined Wellington hockey club did not allow early adversity to undo their playoff run.

Dukes netminder Jonah Capriotti made 16 stops in the frame to keep the game at 1-0 and allow the Wellington skaters to find their legs in the second.

While Wellington would only score once in the middle frame, a Bryce Yetman tip-in at 14:32, the Dukes dominated the Raiders, peppering Timpano with 23 shots as the Raiders simply could not relieve the locals of the puck.

Wellington continued on their date with destiny in the third as Yetman and Teddy McGeen teamed up to pot a shorthanded goal at 10:07 to give the Dukes their first lead of the contest.

The club would extend that lead a few shifts later as McGeen found an extra gear and busted in on Timpano.

The Raiders goalie would make an initial save but Andrew Rinaldi, seeing his first action since a injury in Game 1 of the Northeast Conference finals forced him out of the Wellington lineup, jammed home a loose puck to make it 3-1 Wellington.

That insurance goal would prove huge as Court’s second, a powerplay marker, would crave into the Wellington lead with under three minutes to play.

But Wellington held firm through a combination of Capriotti and a defensive structure that kept the puck on the boards for most of the final 90 seconds of play.

That win set up Sunday’s victory that started out similarly to Saturday night’s game.

The Raiders would strike first once again and this time it was Matt McJannet taking a nice Jordan Crocker feed at the side of the Wellington cage, lifting it over Capriotti for the game’s first goal.

Less than a minute later, a high tip well out from the net beat a screened Capriotti to make it a 2-0 spread in favour of Georgetown and quieted the Dukes’ faithful.

But this is where Wellington’s confidence served them well.

With the knowledge that the second period tends to be their best and that the older Georgetown squad looked tired after the Wellington whirlwind beat them to loose pucks all over the ice a night prior, the Dukes locked their game down in the remaining minutes of the first and regrouped during the intermission.

Wellington had a few good scoring chances early in the period but it wasn’t until playoff most valuable player Colin Doyle jammed home a loose puck at 2:43 that the Wellington fans came back to life and the seed of doubt was planted in the minds of the visiting Raiders.

Just under two minutes later, fortune found Pucci cruising to the Georgetown net and the forward put a loose puck past Timpano to knot the score at 2-2.

The score stayed tied for a while as the teams ebbed and flowed in the manner a league championship should.

It was clear the two blowouts the Raiders managed in Games 3 and 4 were nothing but a distant memory at this point.

Wellington would get their first lead of the game when Josh Supryka scored his first goal on Essroc Arena ice since 2015 when he walked to the front of the net and deposited a backhander to the top of the Georgetown cage at 14:03.

But the Raiders weren’t done as Austin Cho’s point shot managed to beat Capriotti with under two minutes left in the second to make it a 3-3 game.

The Raiders would out shoot Wellington 18-8 in the third, but neither Timpano nor Capriotti blinked in the final frame, setting the stage for Pucci’s heroics.

After the contest, Supryka admitted he couldn’t recall the last goal he scored at the Essroc Arena in a Wellington Dukes uniform but called it surreal to be standing in the white, red and blue and celebrating a Ontario championship where he first cut his teeth in the junior game.

“I didn’t think I’d ever be back after I left but I’m so happy I am because this one of the greatest feelings I’ve had in a long time,” Supryka told the Gazette afterwards. 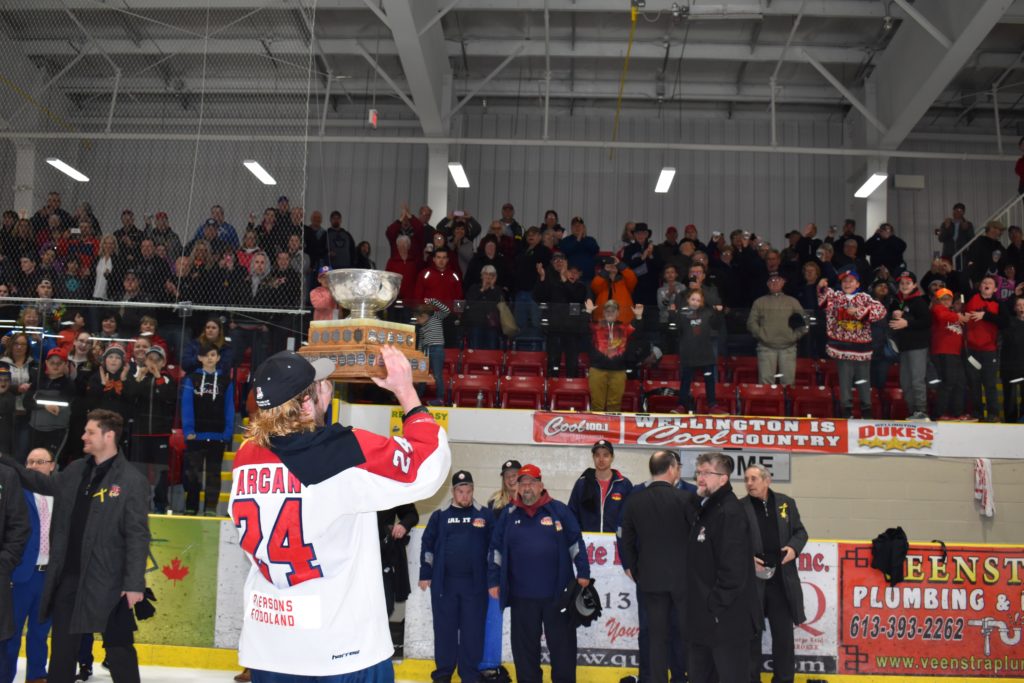 Much has been made in some hockey circles about Wellington utilizing the affiliated player program and bringing in Pucci, Supryka, Yetman and defenceman Andrew Barbeau after their GOJHL playoffs were over but the former Duke that became a current Duke credited the existing players for the accepting nature in which the interlopers were quickly ingrained into the program.

“The boys on this team welcomed us with open arms and they made it so we could come in here, make a difference and it wasn’t awkward and that’s a credit to them and the decision they made to allow us to join them,” Supryka added.

Another credit should go to Wellington bench boss John Druce who added another significant piece of hockey hardware to his mantle.

The 2017 Royal Bank Cup winning coach now has a 2018 Buckland Cup championship to his resume and the job he did in developing Wellington’s confidence while adding the reinforcements to the lineup in just the right way cannot be understated.

Druce himself was an outlier when he was offered the head coaching position in early January when team management determined a change in staffing was needed.

“This was a team that was in a pretty good position and had some success so it was a surprise to get this call,” Druce recalled. “Derek Smith and I looked at this team as a whole and figured out some areas that we could improve on and we’ve made adjustments on a lot of little details. The guys have bought into the program and they understand what it takes to win hockey games, it’s not always about skill, it’s not about making the pretty plays, it’s about playing the game the right way.”

Wellington’s play away from the puck and their attention to detail have turned them from a run-and-gun type club that helped them survive the rigours of regular season into a playoff contender that will do anything to continue a post-season march.

“It’s a matter of the way we were playing and the type of game we played. Before we got here, they played a certain style of game but to win in the playoffs there’s a different style of game you need and the players bought into that. This Wellington Dukes team played tougher, they played harder, they did all the little things that it takes to win a championship and I’m incredibly proud of every one of them.”

Wellington will head to the wilds of northwestern Ontario and the community of Dryden for the 2018 Dudley Hewitt Cup Championship.

The host Dryden Ice Dogs and Superior International Junior Hockey League finalists Thunder Bay North Stars have confirmed their attendance while Northern Ontario Junior Hockey League’s Rayside-Balfour Canadiens are on the brink of elimination at the hands of the Cochrane Crunch.

The tournament gets underway on May 1 when the Dukes will take on the host Ice Dogs at 8:30 p.m. Local time.