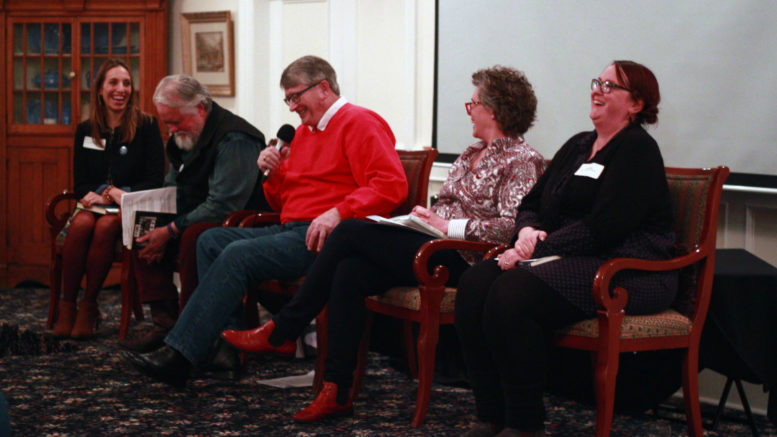 For Shelagh Mathers, the lasting impact of The River will be a yearning to be present in nature.

The local lawyer and 2018 County Reads winner successfully defended the collection of fiction and non-fiction vignettes crafted by Kingston poet and novelist Helen Humphreys during the April 19 event at the Waring House. Mathers said she was surprised to take home the honour.

“It’s all about the books and the writers and supporting them,” she told the Gazette following the vote. “I’m delighted that I was part of it and it’s just a nice little bonus to have had Helen’s book picked.”

The River is described as an examination of place, a blend of art, natural history, and prose crafted from observations gleaned from Humphreys’ waterside property along the Napanee River.

Humphreys’ approach was what spoke to Mathers most about the book.

“It’s what Helen said about observing and being present, but not expecting anything — just seeing what’s there and then what she does with it is she takes something and turns it into that completive wondering that most of us do when we see something,” said Mathers. “Then she says, ‘here’s a story, here’s a vignette’ and it really brings something like a dandelion or a cattail to life.”

Each of the readers was asked what sort of lasting impact their chosen work would have on them. Mathers said the book made her want to go out and do what Humphreys did.

“I want to be present anywhere outside and see what’s there and just watch it pass me by,” she said. “She takes what’s in front of her and does sculpt it into something else and it’s fantastic the way she does that.” Son of a Trickster was shortlisted for the Scotiabank Giller Prize in 2017. The coming-of-age story follows 16-year-old Jared. He faces the stress of living in the basement of his mother’s house and selling drugs to other kids at school to get by while hiding the fact he’s supporting his father financially. All the while he’s dealing with otherworldly things — such as a talking raven — and questions about his own origin that might further shake up his life.

“Son of a Trickster isn’t heavy, nor is it light,” Selecky said in her closing statement. “It crosses boundaries, makes you laugh, teaches you about the universe, makes you see things differently, and tells an incredible, magical, beautiful story.”

Beaubien’s chosen work, Canadian musician Robbie Robertson’s memoir Testimony, provides a candid look into the inner workings and formation of The Band and the music that has stood the test of time. The story takes readers through Robertson’s childhood living at Brantford’s Six Nations Reserve and later in Toronto, follows his journey south at the age of 16, and through the band’s early years working with Bob Dylan.

“The book is an odyssey through music of global proportions that reads like fiction,” Beaubien said. “It’s about family bonds — Robertson’s mother became a mum to all with unconditional love. She regaled in feeding and accommodating any musician Robbie brought home.”

Claire Cameron’s The Last Neanderthal follows two women separated by forty thousand years. Archaeologist Rosamund Gale is racing to excavate a recently uncovered Neanderthal girl before her baby comes. Cameron weaves together Gale’s story with that of the Neanderthal, simply named Girl, who finds herself alone to care for a child of unknown origins. Both stories touch on the experience of motherhood and the sacrifice it requires.

Hobson was confident the book would resonate with readers.

“Believe me, The Last Neanderthal is hard to put down,” he said.

In Glory, published locally by Invisible Publishing, Renee and Danny Chance are set to start a new life in his grandfather’s cabin in Fort St. James, British Columbia — a remote northern town dominated by a deadly lake. Dealing with feelings of loneliness and isolation, Renee finds an outlet in cousins Crystal and Glory Stuart. Together the women combat conflicting feelings of loyalty and independence.

“Glory is a beautifully written, compelling book that does what all great books do,” Dalby said in her closing argument. “It peers into the corners of the heart and mind revealing to us humanity in all its messy, complicated and redemptive glory.”

All of the readers received ovations in an evening that felt like a celebration of literature.

This was the first year of a new look County Reads. The event was expanded to include a slate of author readings and other events throughout the weekend dubbed The County Reads … More. The events took the place of the County Authors’ Festival which is on hiatus for the year.

Also new this year was County Reads Junior, undertaken in partnership with St. Gregory Catholic Elementary School. Students from Grades 7 and 8 recorded videos defending a Canadian book of their choosing.

The winner of the inaugural County Reads Junior was Grade 7 student Alice Graham who championed Speechless by Jennifer Mook-Sang.