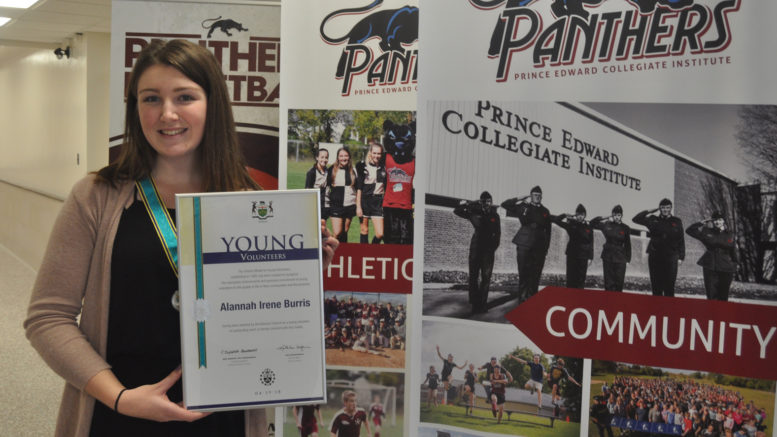 Honoured helper - Alannah Burris was recognized for her giving with an Ontario Medal for Young Volunteers, which was presented in a special ceremony at Queen’s Park last week. (Adam Bramburger/Gazette staff)

For much of her young life, Alannah Burris has been committed to helping where she lives.

Last week, it took her to Toronto and a special audience with Lt.-Gov Elizabeth Dowdeswell as one of 10 recipients of the 2018 Ontario Medal For Young Volunteers. The Consecon native said the experience was “really special,” but it wasn’t something she strived for.

“You’re supposed to help out your neighbours and your community. It’s always something that was taught to me when I was growing up. My sister helps the same way. It’s just the way we were brought up,” she said. “I do it because it makes me happy and it makes other people happy.”

The PECI Grade 12 student said she got her start in volunteering when she was about 8 years old, helping her grandmother Peggy Burris and her Hillier Women’s Institute friends with their annual apple dumpling sale at Wellington’s Pumpkinfest. She would have her role in baking the sweet pastries, helping to transport them, and then selling — typically, a three-day commitment.It’s still a habitual commitment years later — and one that Burris will likely return to even after going away to post-secondary school.

Even Dowdeswell commented on the dumplings after hearing about them in Burris’ citation.

“She was putting my medal on and she said ‘Did you bring me one?’” Burris recalled. While she couldn’t offer the treat, Burris said she had a nice conversation with the vice-regal party about her schooling plans and her volunteer work. Dowdeswell said she might have to visit Pumpkinfest.

In addition to the baking event, Burris has expanded her role helping the Hillier Women’s Institute to working with their annual suppers and fundraising auctions. For the past four years, she’s helped the district with its craft sales in Picton too. Burris has high praise for her role models in the organization.

“They’re all really great ladies. They make a big difference in this community,” she said, recalling how the Women’s Institute helped her basketball team go to Hawaii — after Burris organized the girls to help out at the craft show the year they went.

Turns out, the Hillier branch is quite fond of their longtime volunteer, too. Member Arlene Alyea took the initiative to nominate Burris for the Ministry of Citizenship and Immigration program, while her grandmother snuck into the school to collect supporting information without her knowing.

“They told me after they had all done it. I didn’t know,” Burris said.

She might be forgiven for not keeping a close eye on the ladies. During this past school year, Burris has sat for a second term on the student senate for the Hastings and Prince Edward District School Board, meeting in Belleville with student leaders from other schools regularly to help her peers. Currently, they’re planning a student wellness and leadership conference.

“It’s for students who maybe haven’t found their place as a leader yet. It’s to teach them no matter how small your impact is, you’re still making a difference.”

In the school, Burris is the events chair for student’s council, organizing dances and other activities. She’s often making schedules, tickets, and posters, content to see that her hard work has helped others have more fun at school. She also has served as co-editor of the school’s yearbook, The Beacon, working behind a camera or at a computer.

“When you see everyone looking at it and smiling, it’s really nice,” she said.

In the community, Burris has taken her love for sports and put it to use for the County Clippers, where she helps coach children from Kindergarten to Grade 2.

Guidance counsellor Lisa Fraser wrote a supporting letter for Burris. After serving as a student council advisor and working beside her, she said it was an easy letter to write.

“She’s an amazing girl. She’s easy to work with, she’s diligent and she stays on top of things. She’s basically kind and likes to see things done. When she signs up for something, she follows through,” Fraser said. “I think there was 10 (recipients) in all of Ontario. Only a few were high school students — many of the others were university or college. That’s special. We will certainly miss her around the school, she’s kind of been a go-to person.”

Burris said she enjoyed her time at Queen’s Park, meeting the other winners chosen from a field of over 75. One of the neat experiences, she said, was being one of the only ones from a smaller town.

“It’s big honour. To represent a small town and my school was really amazing. In the moment, you don’t know what to do.”
Burris will be finding a bigger community to participate in next fall as she’ll enrol in university for health sciences. Western and Queen’s are her top two choices as she pursues her goal of serving others in public health. Whether she’s in London or Kingston, however, she won’t sit back.

“Wherever I am, I think it’s important to help the community that you’re in,” she said.