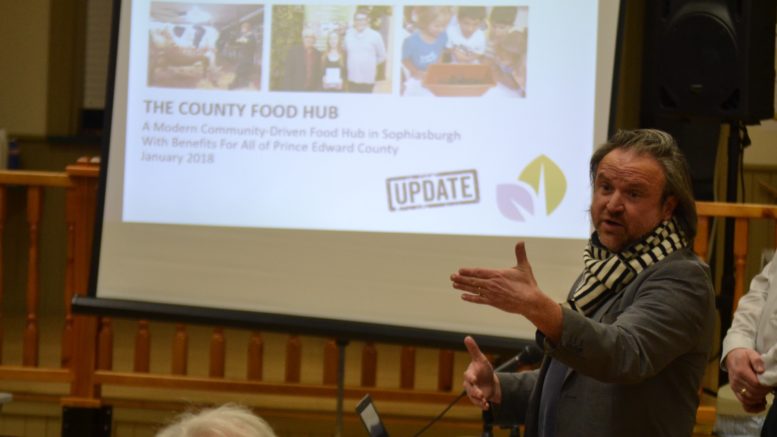 The Hastings and Prince Edward District School Board has granted a four month extension to the Prince Edward County Food Hub Group to finish securing funding that would transform an unused portion of Sophiasburgh Central School into a commercial kitchen space and keep the elementary school open.

At their regular board meeting Monday night at the Education Centre in Belleville, trustees voted in favour of extending the deadline of the agreement between HPEDSB and the Hub working group through to August 31, 2018.

According to a report supporting the motion to allow for more time, the Prince Edward County Food Hub Group have met all the required bench marks that were to be in place prior to the initial April 30th deadline with the exception of the capital funding portion.

A business plan model submitted by the County Food Hub group and agreed to by the Board indicate start up costs for the project would be $772,000 and the first year operating costs including lease costs to be $98,183.

According to figures provided to the board by the Hub group, over $425,000 has been amassed from donations, grants and in-kind services for the startup costs and that amount was bolstered recently with a $90,000 grant from the Ontario Ministry of Agriculture, Food and Rural Affairs.

Other than the funding portion of the project, the County Food Hub group has met all other stipulations and satisfied contractual agreements with the Board including undertaking federal incorporation to gain not-for-profit status.

“We have been meeting with the Hub group since June 19th, 2017 and they have to date, met all of the bench marks on time until most recently they have asked for a little extra time to finish securing the needed funding,” Trustee Jennifer Cobb said in supporting the motion. “They seem to be rolling along and we as trustees have faith in what they are doing and would like to give them some time to be successful and capitalize on all of the hard work they’ve been doing.”

Co-Chair of the Prince Edward County Food Hub Steering Committee Mike Farrell said the granting of the extension is a sign that HPEDSB believes the project is a viable one and only a little more time is needed to see the initiative to the end.

“It’s a great sign and a signal from the administration and trustees that they are going to work with us and they believe in this vision and this opportunity,” Farrell said.

One item of concern for parents of Sophiasburgh Central School children was the contingency put in place that if the financial requirements couldn’t be put in place prior to August 31, 2018, and a contract not realized, the school would be consolidated with students starting to attend Prince Edward Collegiate Institute following the Christmas break.

A mid-school year transition en masse was hardly a palatable option on social media with a number of parents either calling for a decision prior to the end of the current school year or for the board to keep Sophiasburgh operational for the full 2018-19 to allow for a natural transition at the start of the 2019-2020 year.

Farrell understood the concerns surrounding a mid-year transition but urged parents to see this extension as sign of good faith from the Board.

“It’s as much faith as the Board can extend and of course there would be a contingency in place in case the sky started falling but when you look at the funds that have been raised already in such a small amount of time and the community interested in this project, it’s going to happen,” Farrell said. “My message to parents would be to have faith that this will work and find ways to pitch in and play a role in its success. I’ve never had more faith that this project is going to be a reality than today.”

The County of Prince Edward has been an interested overseer in the development of a County Food Hub at Sophiasburgh Central and Mayor Robert Quaiff was pleased to see the Board extend the timeline.

“I am pleased that trustees and staff at the Board continue to be willing partners in developing the County Food Hub at Sophiasburgh. I applaud their decision to give the volunteer steering committee additional time to secure the required funding,” says Mayor Robert Quaiff in a statement. “This project has garnered so much community support and provincial interest in just a few short months, and I am confident the group will reach its financial target. County Council has declared the County Food Hub a project of community interest, pledged $75,000 toward the project, and offered additional support through a variety of means. With the dream of creating a model for rural school hub development in Ontario so close to being a reality, we will continue to do everything we can to advocate for this project at upper levels of government and encourage residents to show their support as well.”