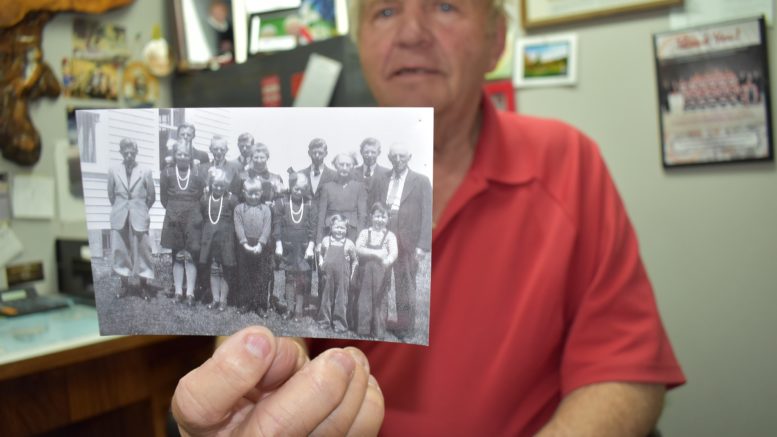 EARLY BEGINNINGS- Ben Prinzen shows a family photo taken in the spring of 1948 just days after the group arrived from Holland. Prinzen, aged 7 at the time, is centre with hands folded. (Jason Parks/Gazette Staff)

It was 70 years ago that the population dynamics of Prince Edward County started changing and changing for the better.

The late 1940s saw mass immigration from Holland to rural areas in Canada in an attempt by the federal government to increase population in rural areas of the country.

Ben Prinzen said he can recall departing his native homeland in early April 1948 just a few days after his seventh birthday.

The family of nine were leaving their home near the Holland-German border in search of a new life and brighter future in Canada- a country they really had no concept of.

“We really had no idea where we were going. We thought we would be living in the woods with Indigenous people. We knew there was some kind of farming but not how big or what type,” Prinzen said with a chuckle Friday as he told the Gazette about the trans-Atlantic journey.

The Prinzen family had given aid and shelter to allied airman during the Second World War and instability in the region made life and prospects in Canada rather appealing.

“We didn’t know what was going to happen again and we were living beside the German border,” Prinzen said

Near the very end of the war, the Dutch people in the town near where the Prinzen family lived rounded up three Germans and hanged them in the town square.

“We didn’t know what the future was going to hold for us,” he added.

The family was part of large contingent of Dutch families that travelled by ship to iconic Pier 21 in Halifax.

“It really wasn’t a nice ship, there were bunks in the bottom and the men slept at one end of the ship and the women and children at the other,” Prinzen said.

The Prinzens were joined by the Veenstra family, another notable Prince Edward County family that have established roots here however the two families did not know each other prior to the journey.

The Prinzen family was sponsored by Harvey Grimmon of South Marysburgh.

An obvious barrier in the early days of the Dutch people settling locally was language but Prinzen said he can never remember not being able to understand what people were talking about.

With four or five families established here as the 1950s approached, church and religion would be an important way for Dutch families to connect with one another and stay rooted in tradition and customs and Prinzen recalls Picton’s Benson Hall serving as a temporary sanctuary each Sunday for worshipping families.

Times might have been tight in those early days of becoming established but the bonds of family were tighter.

Many of the older teenagers and young adults of Dutch descent would find work at various local farms each summer.

“They would go off and work at different farms and they all brought the money home, even at 20, 21 years of age,” Prinzen said. “This was so that dad could get enough money together to buy farms for ourselves.”

And soon, Dutch farmers like the Prinzens, Veenstras, Westervelts, Terpstras and others were working land alongside their Anglo counterparts and making an undeniable and positive impact to the practice of agriculture in Prince Edward County.

“I don’t think the Dutch have hurt Prince Edward County all too much,” Prinzen said “All in all, it’s been a pretty good move.”