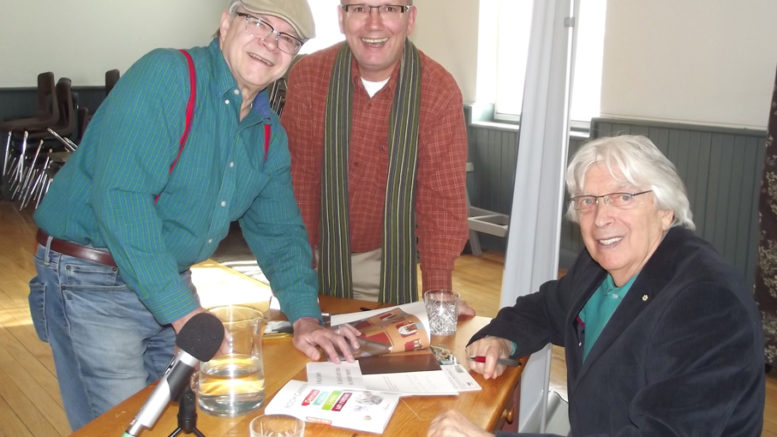 A lasting memory - Edward Hildreth (left) and Reg Zima of Picton were thrilled to have author Roch Carrier sign a copy of one of his books following a talk by Carrier at the Picton Town Hall on Friday, April 2. Carrier’s children’s book about a Montreal hockey fan receiving a Toronto sweater is well known. (Terry McNamee/For The Gazette)

If you want to become a famous author like Roch Carrier, there are two ways to get started. First, read, read, read! Good books, bad books, forbidden books, just explore the world of books. Then, write every day. Every single day. Even if it’s just a few paragraphs or a short story, that kind of discipline will be a huge benefit, and it is what helped him write his own books.

Carrier was speaking at the Picton Town Hall on Friday afternoon, April 20, as part The County Reads…More, a fundraiser for the planned expansion of the Picton Public Library.

A standing-room-only crowd was on hand to hear Carrier talk about his childhood, his life as a writer and his many books. He also read an excerpt from his most recent book, Demain matin, j’ecris un roman (Tomorrow Morning, I’m Writing a Novel), a book about his experiences, how paths can diverge and how one’s origins affect one’s path in life.

An Order of Canada recipient and former National Librarian of Canada, Carrier is probably best known in English-speaking Canada as the author of the children’s book, The Hockey Sweater (Le Chandail de Hockey), but his accomplishments are very varied and include a definitive book about two Quebec heros (or villains, depending on one’s point of view), the two generals Wolfe and Montcalm, who battled to see whether Quebec would remain a French possession or become part of the British Empire. Writing this book was an epic battle in itself, and included a visit to Montcalm’s original home in France. His goal was to discover why Montcalm lost to the English. It turned into a marathon.

“It was 13 years of discipline,” Carrier said. He said he wrote every day, creating “a mountain of papers in every corner!”

Once the book was finished, he was at loose ends, so he started writing snippets of this and that. Finally he realized that all these vignettes could be put together to create a book, and this led to Demain matin, j’ecris un roman.

Carrier said his love of books and writing started in his early teens. Like most French-speaking Quebecers, he had a strict Roman Catholic upbringing, and he was thrown out of school for reading “forbidden books” by French authors such as Balzac and Flaubert. But before that happened, he was fortunate to hear a talk by a young journalist named Jacques Hébert.

“He came (to the school) and he talked to us, to the students,” he recalled. “This was the first writer alive that I met, and I never forgot the presentation.”

Afterwards, he was able to meet with Hébert. A few years later, after Hébert had become a politician, they met again and Carrier gave Hébert a copy of his first manuscript.

“He read the full manuscript, 125 pages, while I was sitting in front of him,” he said. Not only did Hébert like it, he published it. It would be the first of many books that he would publish for the young author.

Carrier went on to win numerous awards for his books, many of which deal with life in Quebec, Canadian history, the hold the Catholic church had, (and to a great extent, still has) over the Quebecois, as well as stories for children. He was the director of the Canada Council for the Arts and still maintains a strong interest in making sure the arts are supported across the country as well as in his native province.