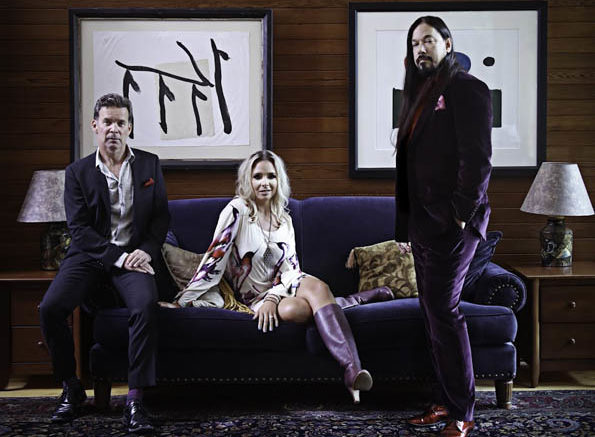 Music at work - Emily Fennell worked with Gord Sinclair, left, and Rob Baker of The Tragically Hip on her latest Miss Emily album. She’ll perform some of the music at County Pop Saturday. (Submitted photo)

Emily Fennell enjoyed the spirit of last year’s County Pop music festival so much, she decided it would be a good opportunity to perform her first show in her native Prince Edward County in a number of years.

“I got the call and thought that would be super fun,”  Fennell, who performs under the stage name Miss Emily, said of Saturday’s event. “I brought my daughter to it last year because we had some friends playing. It was a really well-organized, fun family day.”

Miss Emily will use the occasion to share music from a new album she recorded last fall with The Tragically Hip members Gord Sinclair and Rob Baker providing their musical talents. Shorly thereafter, their band mate Gord Downie died, so the launch was kept fairly low-key at the time.

Early this year, Fennell has been promoting the album more regularly. She launched her first single, “Land of Greed” on AAA radio in the United States and she’s hoping to release a second single soon.

Though her concept of Miss Emily has evolved over the years to incorporate different genres and moods, Fennell said local fans will still find some familiarity in her offering.

When she hits the stage at the Crystal Palace this weekend, Fennell said audiences can expect full-energy tunes.

Having worked full time in the music industry for over 14 years, Fennell said her touring interests have changed. Having mostly outgrown the bar scene, she looks for higher end venues like the Gravenhurst opera house or Kingston’s Isabel Bader Centre. Festivals, like County Pop, are mixed in to add a little bit of a change of pace.

Fennell said she’s been pleased so far with the reception her new music has received across North America. While the business has moved largely to a digital format, she says there has been considerable interest in her CDs and vinyl recordings.

“There are still people going to the merch stand for person-to-person contact instead of a digital screen and that’s really cool,” she said. “People still like to open the liner notes, there’s still a market for that.”

Fennell said in a digital world, when she brings home music, she still likes to sit with her husband and their kids and go through the liner notes and enjoy the cover art.

After County Pop, Fennell said she’d like to do more in Prince Edward County. For now, though she’s just looking forward to the celebration of songwriting talent.

“I love the focus on local artists as well as those from afar. It’s a really great day,” she said.

Miss Emily will be on the stage at 6 p.m. as one of this year’s headliners alongside Elliott Brood — a three-piece Canadian alternative country band from Toronto that had some Juno and Gemini attention, country blues musician Jeremie Albino, Lindsay Ferguson, who is known for her eclectic and melodic vocals, and Toronto-based singer-songwriter Kashka.

Emerging local artists will also share the stage. Songwriters Dave Allen,Grace Bongard, Annelise Noronha, and Siobhan Bodrug are among those confirmed to perform.

The doors open at 3:30 p.m. as the festival continues to live up to founder Dave Ullrich’s manifesto of spotlighting original music and musicians, bringing people together, supporting local businesses, and promoting the county.

As in the past two years, County Pop will aim to feature more than just music. There will be children’s programming where festival goers can make their own rock capes with Krista Dalby or have their faces painted. A new feature this year will allow children to play with real drums, guitars, base guitars, and amplified vocals.

A good representation of local craft food and beverage producers will be on hand as well to offer their wares throughout the day.

To purchase $30 advance tickets — with a dollar from each going to the Prince Edward Learning Centre — or for more information, visit www.countypop.ca. Tickets at the gate on Saturday will be $35.