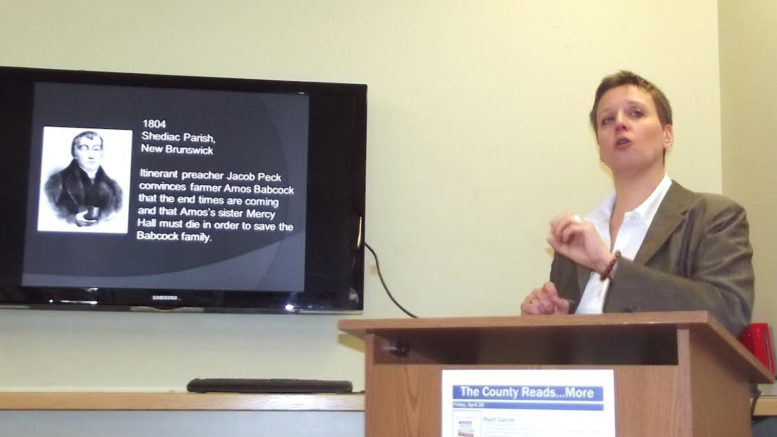 Revealing information -Author Debra Komar discussed her non-fiction books, including The Ballad of Jacob Peck, which examines the murder of Mercy Hall in New Brunswick in 1805, during her talk entitled “Getting Away With Murder: Rewriting Canada's History One Crime At A Time” at the Picton Library last Friday. (Terry McNamee/For The Gazette)

There is a long history of true crime writing in North America, but few of the authors have the credentials belonging to Canadian author Debra Komar.

As a forensic anthropologist, Komar sees crimes from a different viewpoint, since she has literally written the book on the methods and use of forensic anthropology. Her job, both as a forensic specialist and as an author, is to find and present the evidence so that the truth can come out, no matter how unpleasant that truth may be — or how dangerous it is to reveal it. As well as digging up bodies, trying to identify them and, when possible, determining cause of death, her job involved testifying at the international court at The Hague in cases of genocide.

Komar was the guest speaker at the Picton Library on Friday evening, April 20, and in addition to talking about her latest Canadian mystery, Black River Road, she gave attendees a crash course in crime scene investigation and the search for evidence in cases where people died at the hands of others. Signed – Canadian author and retired forensic anthropologist Debra Komar signed a copy of her current book for
Ron Aston of Waupoos following her talk at the Picton Library on Friday, April 20. The event was afundraiser for the library;s expansion program.

“For 23 years, I was a medical examiner… anywhere there were large-scale death events,” Komar said. She has worked on identifying bodies in mass graves in places such as the former Yugoslavia and Rwanda and at sites such as the World Trade Centre in New York City.

Whether digging up mass graves in war-torn countries or digging up 100-year-old records deliberately hidden deep in Canada’s archives, Komar was and is determined to find out what happened, who the victims were, and how they died.

It is not an easy task, but Komar is driven to lay these crimes bare, even if they expose government actions some would rather not have the public know. Her earlier books brought forward new analysis of old cases to reveal the truth of interesting murders in Canadian history, but none had the potential to ignite a battle over indigenous rights in Canada the way her upcoming book probably will.

Komar said the book, not yet released, is not going to sit well with the Canadian government, because it exposes the wrongful execution in February 1924 of two Inuit men named Alikomiak and Tatimagana for murders they did not commit in an area of the far north (now part of Nunavut) where Canada and the Royal Canadian Mounted Police had no legal jurisdiction at the time.

While the case itself is well known, Komar said it took many months of first trying to gain access to the old case records, which initially she was prevented from seeing, and then going through those records and analyzing the evidence to find the truth. She soon realized that the two accused men were innocent and that their arrests by the RCMP and their subsequent deaths by hanging were illegal. That was new information not previously made public.

“I can prove that their confessions were fake,” she said. Komar explained that the whole case was, in essence, a land grab — a way to control an area by showing that a government has legal jurisdiction over it. “But Canada didn’t have the legal right to do it,” she said. “When this comes out … it’s gonna be ugly for awhile, because it’s not something the Canadian government wants you to know. “

(Gov.-Gen) Lord Byng didn’t sign the execution order,” she added. “Even Byng recognized that Canada shouldn’t do this, but Canada went ahead and did it.”

She said that Inuit people are still fighting for autonomy, and that when this information is brought to light, it will be embarrassing for the government and provide the Inuit with legal ammunition. She noted that Prime Minister Justin Trudeau has not included the Inuit in his Indigenous reconciliation program, and speculated that this may be part of the reason.

Komar is now working full time as a writer, having retired from her job investigating deaths and genocide, although she is still involved in giving testimony at The Hague on some cases she has worked on. Dealing with death on such a large scale has affected her deeply.

“My way to deal with it was to be emotionally absent,” she said, but eventually facing so much hatred caught up with her, and she had to stop. “I probably stayed five years longer than I should have,” she said.

The one thing genocides have in common, Komar said, is a leader who comes to power and uses that power to create a climate of fear and hatred through self-aggrandizing and by targeting the media, mocking others and creating a climate of “us versus them”. Whether it is Pol Pol in Cambodia, Hitler in Germany or Milosevic in Yugoslavia, such leaders gain power when too many people consider them fools who cannot possibly take over a country. But once it happens, in far too many cases, the ultimate result is genocide.

Komar said she fears that may be the fate of the United States under President Donald Trump, because his presidency is following that same pattern. “I’m not laughing at Trump,” she said “I’ve cleaned up after these guys all of my career.” For more information about Komar’s real-life murder mysteries, which are available at the Picton branch, visit Goodreads at https://www.goodreads.com/ author/show/893953.Debra_ Komar.