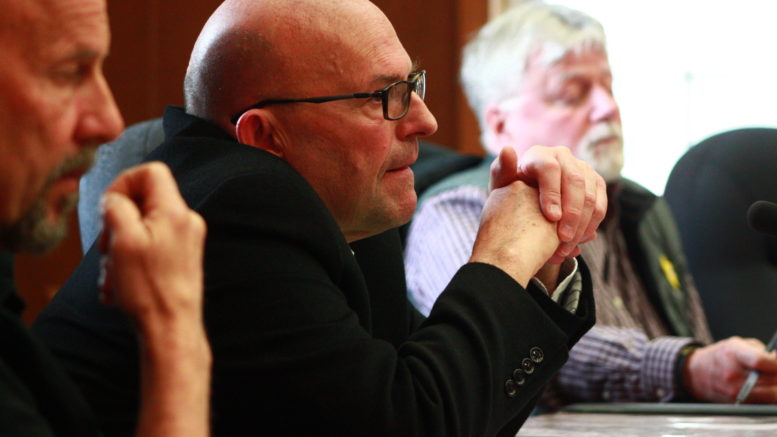 Councillor Steve Ferguson tabled a motion to have staff investigate the financial implications of an increased commitment to a new hospital. (Chad Ibbotson/Gazette staff)

Councillors have asked for a staff report that will provide details and implications of a $4.5-million commitment to the construction of new hospital.

The report will look into both financial implications and will provide an overview of the social impacts there could be if the project didn’t go forward.

Council has committed $1.25 million over 10 years to the project, but the Prince Edward County Memorial Hospital Foundation is asking the municipality to take on a greater share of the cost. At the April 12 committee-of-the-whole meeting the foundation asked councillors to consider increasing the municipal commitment to the construction costs of a new hospital to a maximum of $4.5 million.
Councillor Steve Ferguson tabled the motion to have staff look into what a commitment of that magnitude would mean for the municipality. He said there’s no questioning the importance of the hospital.

“I don’t think it’s lost on anybody the importance a hospital plays in any community,” he said. “It is one of the pillars of the community and, in our case, it draws new residents who will increase the tax base, it will help us increase use of our infrastructure — it is a critical component in the future of Prince Edward County.”

In the event a new hospital wasn’t built, he said there could be a lot of long-term negatives.

There’s a push to deal with the issue as quickly as possible as the hospital foundation has provincial timelines that must be adhered to. He said he didn’t think it was unreasonable to seek a report on the request considering those potential impacts.

Councillor Roy Pennell said council must discuss the request come budget time and suggested a motion to that effect might be a better option.

“We can have all the reports we want, to me the most important thing is that this comes before whatever council is here in the coming year for the budget process,” he said.

Chief administrative officer James Hepburn said the report could come back this summer.