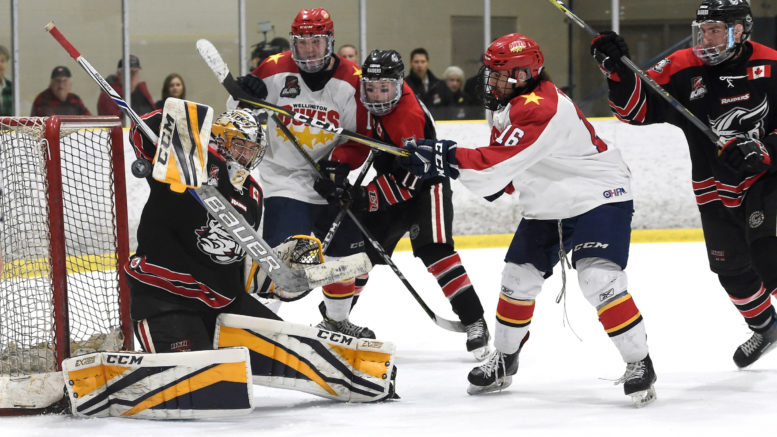 ON THE SPOT- The Wellington Dukes are playing in the 2018 Dudley Hewitt Cup thanks to (From left) Wellington Dukes forwards Ben Evans and Frank Pucci. Evans set up Pucci just after this sequence in Game 6 of the Buckland Cup Finals to lift the Dukes to their third OJHL playoff championship in franchise history. The overtime goal was shown on Hockey Night In Canada on Friday. (Photo by Andy Corneau / OJHL Images)

It wasn’t the first time the Wellington Dukes have been mentioned at the pulpit of hockey and it hopefully won’t be the last but those NHL hockey fans who were tuned into Coach’s Corner on Friday evening got a small glimpse of a packed Essroc Arena and the local Junior A team’s latest Buckland Cup Triumph.

Don Cherry and Ron MacLean took time to mention the Wellington Dukes and their head coach John Druce during the first intermission of Game 1 of the 2018 Stanley Cup playoff game between Nashville and Winnipeg Friday night.

For those that don’t know (and you’re in good company for reasons that will be explained in a moment), Druce is the author of one of the greatest post-season goal scoring explosions in hockey history. In the 1990 playoffs, Druce managed to light the lamp 14 times in 15 post-season games for the Washington Capitals.

Druce’s nine goals in the Patrick Division final against the New York Rangers is third all-time for goals in a seven game series and only trails hockey legends Jari Kurri (12 in 1985) and Tim Kerr(10 in 1989).

Druce told the Gazette Saturday morning he had received an e-mail from MacLean earlier Friday congratulating the Peterborough native and the hockey club for their 2018 OJHL but had no idea his playoff heroics would be mentioned on that evening’s broadcast let alone highlighted with video clips of a selection of goals, a few of which the veteran of 531 regular season NHL games had never seen before.

“No, I had no idea,” Druce said with a laugh. “I was sitting there watching like everyone else and said ‘Oh, that’s pretty cool’.”

Early in the second round, fate shone on Druce as Caps leading scorer Dino Ciccarelli was felled with a knee injury, elevating Druce to Washington’s top line.

By the time the Capitals had vanquished the Broadway Blueshirts in five games, Druce had bettered his regular season goal total (8) by one-in just the Division finals alone.

“I had tons of opportunity and just drove the net and was able to start banging in all those goals, ”Druce said. “I was at right place at the right time and I explain to the players we have that you prepare every day for the opportunity and you never know when it’s going to find you. Luckily for me I was ready for it and I was prepared.”

Druce would never hold as hot a stick as he did in the spring of 1990 but did manage 22 goals the next season en route to a very respectable pro hockey career that saw him play with the likes of Wayne Gretzky in Los Angeles, Teemu Selanne in Winnipeg and Eric Lindros in Philadelphia.

Having worn the scorer’s hat and the checker’s hat in post-season competition, Druce knows that it often takes 25 players pulling in the same direction to make a team successful and uses his own experiences as prime example that sometimes-in an instant- roles can be reversed. “Everyone is valuable and I tell them that if they aren’t getting an opportunity right now, be ready for when it arrives because it happens quickly,” Druce said.

Looking at his own lineup, Druce saw a couple of skaters that were able to make the most out of opportunities handed to them late in the playoffs.

First-year forward Nelson Powers was a healthy scratch in the North-East Conference final against the Aurora Tigers but drew back into the lineup for Game 1 of the Buckland Cup final, scoring a key goal in Game 2 while providing a physical presence in all six games.

“It was a huge goal for us and he really played well,” Druce said.

On the back end, Noah Lugli had an assist in the clinching game of the finals and played some important minutes in Wellington’s last four games of the OJHL finals.

Druce said dressing seven defencemen provided Lugli with a chance to get back into the lineup and provide the team with some key defensive depth.

The club was at Essroc Arena for a practice and pep rally on Saturday and the news that the team and their head coach were mentioned by Cherry and Maclean was the hot topic of the day.

And in addition to Druce’s goals, a clip of Frank Pucci’s overtime winner was shown on Hockey Night In Canada and although Pucci’s name was mentioned by both Ron and Don, the player who made the magic happen from behind the Georgetown net was unfortunately forgotten.

Ben Evans has an uncanny knack for finding seams and passing lanes not obvious to anyone but him.

“When I saw the puck coming to me behind the net and I saw that Frank and Mitch (Mendonca) were heading to the front of the net. I thought if I made a step to the net, I could throw it back and they would be there to bang it in and Pucci was,” Evans told the Gazette as he described the set up that brought the organization its third Buckland Cup championship. “I saw (Georgetown Raiders goalie Troy) Timpano was biting on me and the defence was coming towards me and I knew if I could get it through on my back hand, It was going to work out.”

After playing last season with the Ottawa 67’s, Evans found himself in Wellington this October after not fitting in to a Baberpole regime change.

Evans has been happy for the opportunity to star in Wellington and be part of a very special season.

“The team welcomed me with open arms and for me, it’s been about getting better everyday,” Evans said. “This playoff run has been so special and after struggling to get through the first two rounds, who would of ever thought it but here we are playing for a Dudley Hewitt Cup.”

As for the contrast of playing in Canada’s capital city to playing in Wellington, Evans said this latest run has shown him and his teammates why this community and their Jr. A hockey team go hand in hand.

“I think every guy in the room thinks the same thing about our fans and that is they are the best in the OJHL. You go to some buildings there’s 50 people and you come here and there’s least 500 and in the playoffs, 1,000,” Evans said. “When Pucci scored to win the Buckland Cup, it was one of the loudest buildings I’ve ever been in and the fans and the Dukedome helped us all the way to the Buckland Cup.” When asked if he knew how big his current coach came through for the Washington Capitals in the 1990 Stanley Cup finals, Evans laughed.

“No, I knew he had played in the NHL and he had scored a little bit here and there but no, I had no idea,” Evans said with a smile.

Like Evans, Pucci happened to be tuned into HNIC Friday night and was as surprised as anyone in the organization when the stars of the Coach’s Corner started talking about the club’s head coach.

Even more surprising to Pucci was that a clip of the goal that cements him as a Wellington Dukes legend despite only playing 14 (and counting) games with organization was shown.

“I’ve been watching Coach’s Corner since I was little and to be mentioned on the show and have Ron and Don both say my name was unbelievable,” Pucci said. “It was great publicity for the team and obviously I’ll never forget them showing my overtime goal.”

After a brisk workout, Pucci, Evans and the rest of the club joined fans in the Highline Hall for a send off prior to flying to Thunder Bay en route to Dryden, ON and the 2018 Dudley Hewitt Cup tournament.

Druce said the team was feeling good and hoped to get acclimated on Monday during the club’s practice at the Dryden Memorial Arena.

It’s always unnerving to have not played against a team and in a different rink but as long as we play our game and execute what we want to execute we should be fine,” Druce said. “We done our pre-scouting, we have an idea of what the other teams try to do and it’s just a matter of showing up prepared and not taking anything for granted.”

Wellington Dukes fans are encouraged to come to the Highline Hall this week to view the club’s Dudley Hewitt Cup games starting at 8:30 p.m. Tuesday when the team plays the host Dryden GM Ice Dogs.

Admission is $5 and the bar and canteen will be open.