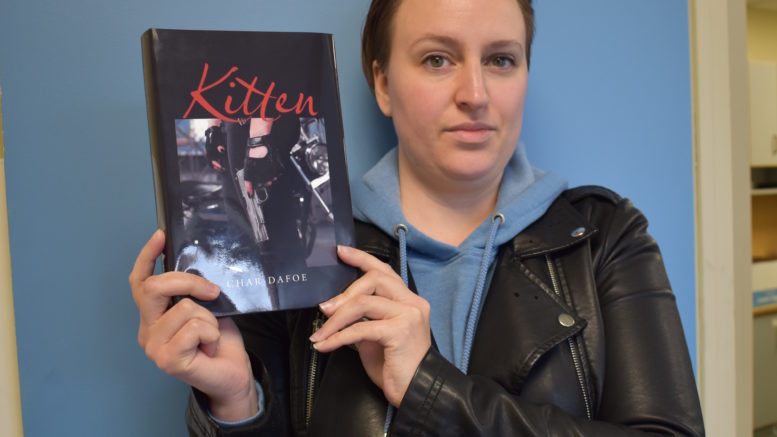 A Prince Edward County author’s debut effort is getting strong reviews in the online market place.

Char Dafoe’s Kitten, a fast-paced and suspenseful page turner that has a dash of erotica thrown in for good measure is getting much love from reviewing readers on multiple Amazon domains (USA, Canada and UK) as well as Good Reads.

If a strong, alpha-female leading character and motorcycle club fiction strike a chord with you, Kitten is your next can’t-put-it-down high-tempo piece of fiction.

Dafoe’s first commercial effort is told from the point-of-view of Rae, the leader of the Dark Angels motorcycle club.

Having written poems and short stories since she was 16, Dafoe said that the lead character in Kitten has resided in her imagination for some time.

“Rae has been in my head since I was 14 years old and she’s a woman I’ve been striving to be,” Dafoe told the Gazette. “I was going through a tough time in 2016 and I created a fantasy world in my head. Someone suggested that I write it down.”

So Dafoe penned her thoughts and started developing characters, scenarios and plots along the way.

“The next thing you know, I’m writing a book,” Dafoe said.

The story also features two other female characters-Ruby who is Rae’s friend and Christina, a young woman for whom Rae develops feelings for.

“Rae’s been with me my whole life and the other two female characters, Ruby and Christina, have traits of me in them as well,” Dafoe explained.

Typically a non-violent club, the leader of the Dark Angels has a violent streak as it’s her life’s mission to protect those that she loves.

Dafoe explains Rae finds herself in love with someone with a dark past that catches up with her and group’s leader has to try and keep the love interest safe.

“She’s a beautiful, Wonder Woman-type character that happens to ride a Harley Davidson and has a Glock pistol” Dafoe added.

It’s that strong character who takes no guff from anyone that seems to satiate readers judging by reviews.

Excellent character development, an awesome roller coaster ride thriller and extremely well-written are just some of the compliments being paid to Defoe on-line.
And Rae’s persona and attitude is a big reason why.

“They all seem to love Rae and I wasn’t really expecting that but a lot of women are rooting for her and love how strong she is. They also love that it’s fast-paced with no lull in the story line and these women all kick ass,” Dafoe added.

The 31-year-old author also pointed out her mother was a main inspiration to her creative process in terms of development.

“My mother was also a strong inspiration for some of these characters, I watched her have to fight back against some situations in her own life and she keeps fighting to this day,” the author added.

Dafoe will be available to meet and greet readers Chapters in Bellevile for a June 30 book signing. Her work is also available at locally at Books & Co and online through Amazon and other virtual retail stores.