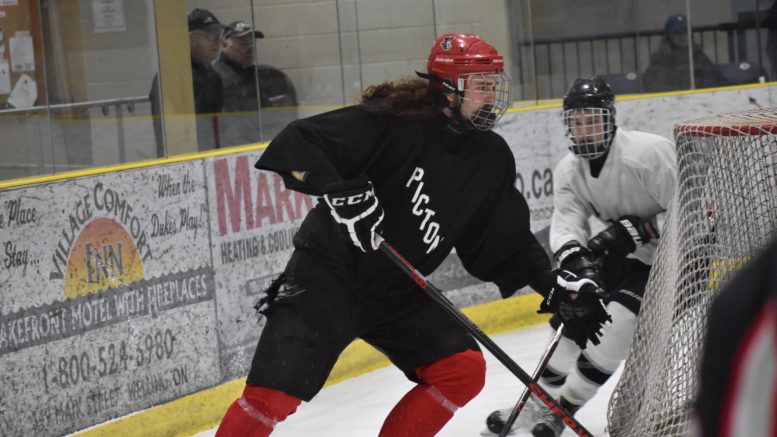 Hot on the heels of a solid 24 win season and a third place finish in the Tod Division of the Provincial Junior Hockey League, the Picton Pirates wasted little time and set their sights on the 2018-19 season this weekend.

Picton Pirates General Manager Chris Masterson declared the one day session very productive for the local Jr. C outfit and was happy with both the number and quality of prospects in attendance.

In total, 35 skaters and five netminders took to the ice which was a sizable number for the annual pre-preseason skate.

“We had a really good turnout of players including a dozen from Prince Edward County,” Masterson told the Gazette Monday. “That’s probably the highest number of local skaters we’ve had in some time and that’s great to see.”

And it wasn’t just local content that left the Pirates braintrust impressed but the overall level of skill and determination.

Players were quick to loose pucks, there was an increase in intensity throughout the day and players seemed to genuine in their attempts to make their mark prior to the regular fall training camp.

“Overall, the quality really stood out. We remarked as a coaching staff that this was probably the best camp in terms of quality in my four years associated with the club,” Masterson added.

Among those locals looking to make an impression this weekend were a number of AAA players that are 2002-birth years.

Judging by Masterson’s assessment, the Pirates could be in the running for a top-end 16 year old with local ties as their is no shortage of good 2002-birth year players.

Cooper Rogers and Nick Kirby-Paliser both played for Quinte this past season while Nolan Dawson suited up for the Greater Kingston Jr. Frontenacs and Riley St. Pierre played for the Prince Edward County Kings.

Masterson mentioned all four local products as having great camps.

“I suspect we will end up with a good, quality 16-year old,” Masterson said.

Another local product that performed well despite being off the Pirates radar was Riley St. Pierre’s older brother Cole.

“Cole St. Pierre really had a great training camp and we were really happy and surprised with the way he played,” Masterson said of the Prince Edward County Kings grad. “He’s a 2000 player that really performed well.”

In net, Picton will have some questions moving forward.

While Wes Werner took part in Saturday’s skate, the lanky netminder is moving on to play in the American Collegiate Hockey Association next season.

“We have no returning goaltenders and we are certainly on the hunt for an established goaltender through the trade route,” Masterson said. “We are also looking to develop a younger netminder but the start of training camp is still well off.”

The Pirates will field a team in the Trenton Golden Hawks-organized spring league over the next two months.

The 2018 spring season will mark the second straight time the Pirates have taken part and, if last year’s crop of recruits are any indication, the club should identify a couple of players.

“From that team last year, we were able to identify and sign Noah Brant, Justin Arnold and Brayden Bertran,” Masterson said. “It was such a success and we start that process on Wednesday.”

In other Pirates news, Masterson offered brief comment on a potential ownership situation that may develop soon.

Currently the club is operated by a volunteer executive board as a non-profit, community owned-entity.

Earlier this spring, Wellington Dukes Vice President Randy Uens made mention at a public town hall meeting that the club was exploring the possibility of purchasing the Picton Pirates.

Masterson didn’t mention the Wellington Dukes by name but confirmed there were ongoing talks with a potential buyer. “It’s really hard to continue to survive as a junior hockey team in a non-profit situation anymore,” Masterson said. “We have an excellent volunteer structure but they have done their share and then some over many years. If we want to be successful, we need an owner and we are currently working on that.”

The club also took time out to honour its top performers of the 2017-18 season with the the annual Picton Pirates awards banquet.

Brant was among the top players this past season, taking home the Rookie of the Year award and the Playoff MVP.

Defenceman of the Year-Nick Kyte.