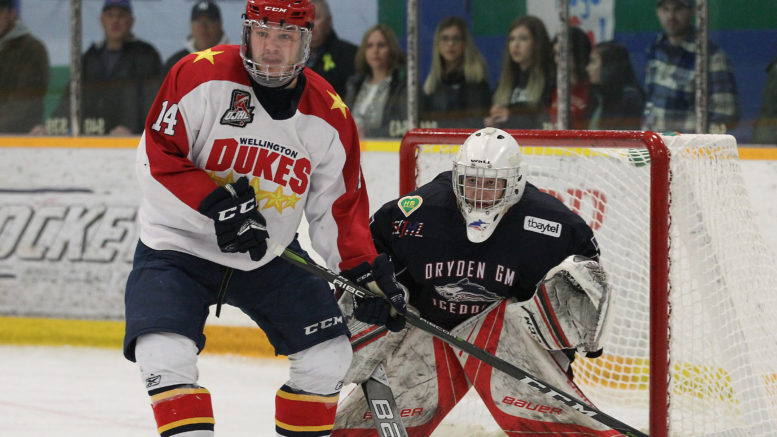 NOTHING TO SHOOT AT- Wellington Dukes forward Ben Evans tries to block Dryden Ice Dogs netminder Landon Pavlisin during the club's opening game of the 2018 Dudley Hewitt Cup in Dryden, ON Tuesday night. Pavlisin made 38 saves in a 4-1 win. (Photo by Tim Bates/DHC via OJHL Images)

It certainly wasn’t the Dudley-Hewitt Cup debut the Wellington Dukes were dreaming of.

The host Dryden Ice Dogs of the Superior International Junior Hockey League got the jump on the locals at the 2018 Central Canada Jr. A hockey championship Tuesday night, downing Wellington 4-1.

The Buckland Cup champs had a tough time with Dryden netminder Landon Pavlisin as the Anaheim, CA native made 38 saves for the Ice Dogs in a spectacular performance that had Wellington shooters shaking their heads time and again. The Ice Dogs would break the ice in the first period when Woody Galbraith slipped a powerplay goal under the left pad of Jonah Capriotti with about seven minutes to go in the opening frame to stake Dryden to a lead the Bill Salonen Cup champions would never relinquish.

Wellington’s best chances came in the second period which has been typically the club’s best frame in these 2018 playoffs.

Mitch Martan was foiled by Pavlisin on a breakaway as the Wellington sniper tried to slip the puck five hole.

It would be 3-0 thanks to Kris Hamiln’s first of the tournament before Wellington would get their first of the contest.

Wellington’s player of the game Geoff Lawson was able to feed Daniel Panetta at 8:58 to give the Dukes some life.

But that would be as close as Wellington would get in their opening game of the 2018 Dudley Hewitt Cup.

The Ice Dogs added an empty netter with a second left on the clock to finalize the scoring at 4-1.

Earlier in the day, the Thunder Bay North Stars skated past the Cochrane Crunch 4-0.

Wellington was due to play the SIJHL Salonen Cup finalists at 3:30 p.m. On Wednesday with the Northern Ontario Junior Hockey League’s Crunch and the Ice Dogs meeting in the evening.

The Dukes will finish up the preliminary round on Thursday with game against Cochrane at 3:30 p.m.

‘Round the ‘Roc: About 75 Wellington fans showed up to the Highline Hall to watch the opening game Tuesday night. Admission is $5 for games involving the Dukes…Panetta returned to the Wellington lineup after missing the final four games of the Buckland Cup finals.