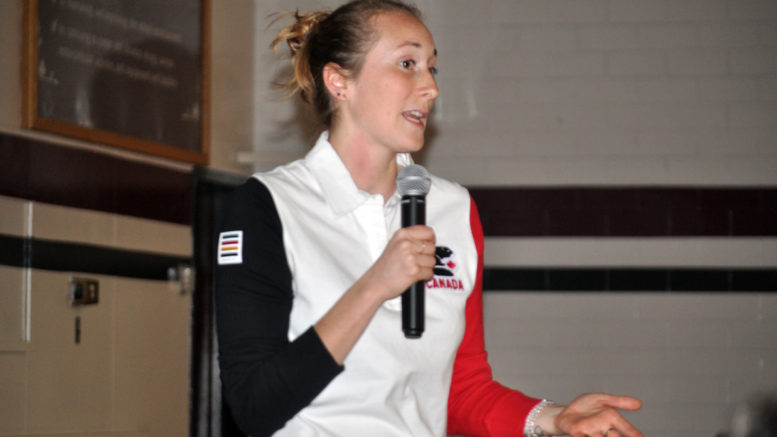 Overcoming obstacles -Rosie Cossar, the captain of Canada’s 2012 Olympic rhythmic gymnastics team discusses the difficulties she endured before coming out to her teammates. (Adam Bramburger/Gazette staff)

Rosie Cossar discusses overcoming stigma of her sexuality in sport

Rhythmic gymnastics was Rosie Cossar’s entire world and it almost came crashing down on her because of stigma.

The captain of Canada’s first rhythmic gymnastics team to compete at the Olympic Games in London in 2012 was at PECI Friday to talk to students about her experiences and inclusion.

Cossar discussed how she joined the sport as a 5 year old with boundless energy looking for an outlet. Coaches recognized her talents and she went off to Russia at a young age to train in one of the top academies in the world. By age 10, she was training under a demanding coach in Moncton and her hard work led her to a fourth-place finish in a national championship and an competitive international career. 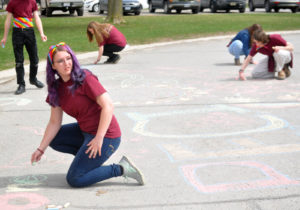 She remembers being about 11 or 12 and thinking some girls in her classes were “the best thing in the world.” Over time, she started to realize that she looked at women differently than she was supposed to and didn’t really have the same interest in boys.

At 15, she came to grips with her sexuality while she was journaling. Shaking, she wrote an almost illegible “I am gay.”

She struggled to come out to her younger sister, Emily, when she couldn’t say the word “gay” because all her life, she’d heard it used as an insult. She worked up the courage to tell her mother and her announcement was met with the words “Don’t be ridiculous.”

Cossar said that was hurtful at the time, but she now thinks her mom was in shock and didn’t quite know how to deal with what she was hearing. She says her mom has always had her best interests at heart.

Being openly gay in her sport, however, was another matter.

“There’s a culture in every sport. The culture in rhythmic gymnastics has this idea there’s one right way to be a woman.. Everyone tries to fit that mold,” she said. “Starting off, I can tell you I was nowhere near that woman.”

As a teenager trying to come into her own Cossar didn’t believe she could tell others in the sport about who she was and she didn’t feel comfortable or confident in her own skin. She tried to hide who she really was.

“At that time, I thought something was wrong with me and I had to desperately hide it,” she said. “In order to hide that part of me, I started to build a mask. I built disguises — a full body armour suit. I had to pretend all the time. I was lying all the time, trying to make up this person that I wasn’t actually.”

The scary part, she said was that sometimes, she forgot who she really was and what she really wanted to be. The masks started to affect Cossar’s training and her relationships with others.

“I’m 16 and my trainings are a roller coaster. I’m up and down. I train really well, and then I don’t. I’m so unpredictable and no one knows why. My teammates started calling me bipolar,” she said.

Now, she sees that she was simply good at hiding herself some days and other days she wasn’t so good. Sometimes, she just became silent. “I wouldn’t say a word. I was in a really dark place and I wasn’t present,” she said.

In the back of her head, though, she decided she’d have to train harder than anyone so that if she lost her armour, she would still be valued.

Cossar said she spent twice as much time in the gym as her teammates out of fear, but she did end up becoming a top athlete on the team. Others respected her effort and leadership as she helped the Canadians get noticed on the international scene.

The five athletes on the team rallied as underdogs. They climbed the standings in competitions and started making the final eight in 2011, which was unheard of for Canadians at the time. At the World Cup that year, Canada placed fourth and qualified for the Olympics. Cossar said incredibly, five athletes did two performances without one discernable mistake.

That was also the time life began to take a turn for the better for Cossar. It started with a moment of truth.

Cossar worked up the courage to tell her teammates one-by-one. She told her best friend, Alex Landry, last because she had heard her using casual homophobic language in the past unintentionally.

“Every time I heard something from her, I was deeper in the closet,” she said. “She was so upset, she had no idea she was hurting anyone, let alone her best friend. Language is so important.”

The confidence changed Cossar’s performance in a powerful way. She found she had more confidence and she was able to be more expressive toward the judges and the audience. It was finally her story.

“I absolutely was my authentic self,” she said. “I used to be very nervous to compete. All of a sudden, I loved it. I was so excited and desperate almost to go on the carpet and share who I actually was.”

The Olympic performance would be Cossar’s last. She considered herself very lucky to have been able to come out while competing at a high level, noting many athletes wait until after they retire because of fear. Cossar said knows there are a lot of athletes in the LGBTQ spectrum or others who haven’t felt included in their sport’s culture who simply haven’t made it in sport — not because of talent, but a lack of commitment, but because they just feel there’s no space for them.

That’s where Cossar decided she could fit in. The Canadian Olympic Committee started the One Team Program, which utilizes top-level athletes to break down barriers to inclusion in sport. Cossar joined that team and she’s been managing the One Team Program for three years. It now has over 50 ambassadors in a range of sports. Cossar feels there’s purpose in talks like the one she gave in Picton.

“After I retired, I realized I had a job to do. I started having conversations with as many people as possible. I wanted to address the world of sport. That was my world. I didn’t want to leave the world of sport with a bad taste.”

Cossar said no one should have to deal with silence or stigma.

The assembly, and subsequent meetings with students from several Hastings and Prince Edward District School Board schools was arranged by PECI’s Social and Environmental Justice League. Its advisor, Janet Curran, was the person who made contact with One Team and Cossar.

Principal Darren McFarlane said there was an important message offered.

“We are privileged to be exploring a topic this morning that’s very near and dear to my heart and something we’ve been pursuing as a school and it’s the whole topic of inclusion. It could be inclusion with regard to your gender, your ethnic background, or your sexual orientation,” he said. “I want to go a step further. Inclusion is basically anything with regard to accepting people for who they are and focusing on quality interactions in the school and throughout your daily life.”

McFarlane referenced recent tragedies in Saskatchewan and Toronto and stated that those involved had no idea how their lives were going to change. He said it’s important that students have meaningful positive conversations with those around them.

“How can we as individuals do a better job to contribute to them having a better day? I invite you to think about the interactions you share and how you can perhaps change something or tweak something small to be a contributor to something positive.”

Ken Dostaler, the board’s system principal for equity and inclusive education, and a former national athlete in boxing and kickboxing himself, agreed. He said in his athletic career, he’d seen athletes put down others who were different and finds that unacceptable.

“Today’s message is exactly in line with what we want as a board. We want to promote acceptance. We don’t want to put other people down because they’re different…Things go so much better when we accept people.”

Emily Boone, the president of PECI’s Social and Environmental Justice League was pleased with the effort to promote inclusivity and diversity in the school and to celebrate it.

“We want to emphasize that we are one team, we are one community. We are HPEDSB and we hope this attitude will expand to the rest of the world.”