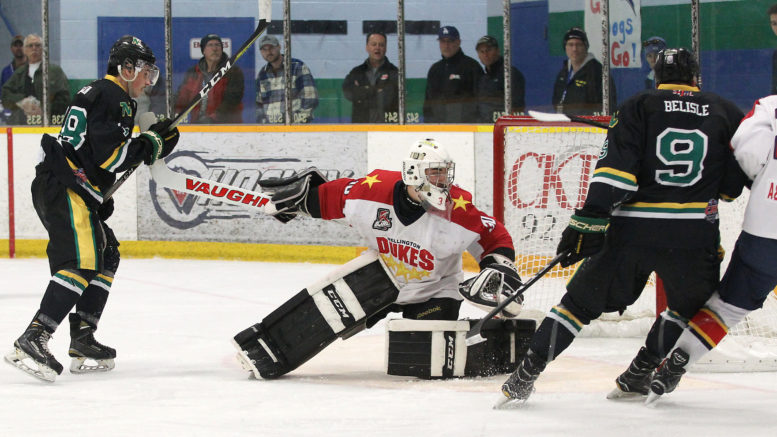 HOLDING ON- Joel Willan of the Thunder Bay North Stars grabs Jonah Capriotti's stick in the first period of Game 3 of the Central Canadian Junior Championships Wednesday afternoon. Capriotti and the Wellington Dukes won the game 4-1. (Photo by Tim Bates/DHC via OJHL Images)

The Wellington Dukes got the bounce-back effort they were hoping for Wednesday as they downed the Superior International Junior hockey League’s Thunder Bay North Stars 4-1. 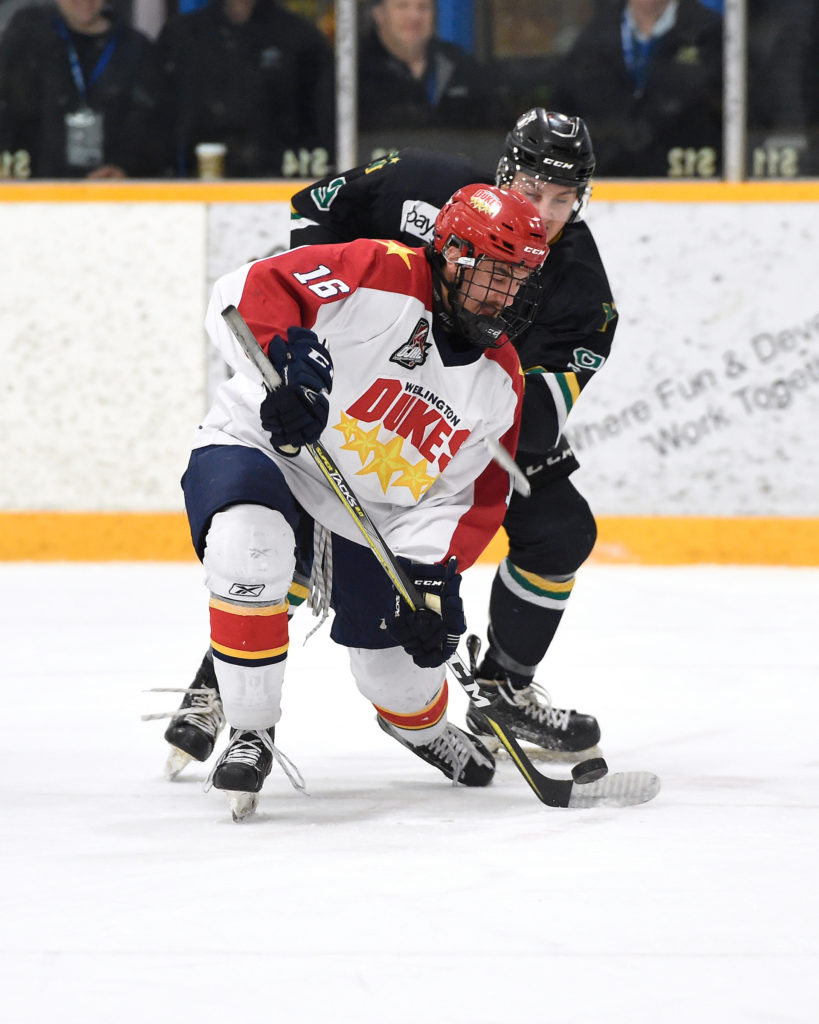 After dropping their 2018 Dudley Hewitt Cup opener 4-1 to the Dryden Ice Dogs a night prior, the Dukes went into yesterday afternoon’s game knowing a second consecutive loss could spell the end of their post season run and death to their hopes of competing for the 2018 Royal Bank Cup in Chilliwack, British Columbia later this month.

But the Dukes were ready to role at the drop of the puck Wednesday, scoring three goals in the first period en route to a dominating win over the 2018 Bill Salonen Cup finalists.

Zach Uens scored a powerplay goal 5:50 into the first thanks to help from Mitch Martan and Bryce Yetman to give the Dukes a lead they would never relinquish.

Yetman counted his first of the tournament about 90 seconds later, finding a hole in North Stars netminder Brandon Bodnar to make it a 2-0 lead.

Near the end of the frame, Colin Doyle spotted Martan with time and space at 17:46 and it was a 3-0 lead in favour of the Buckland Cup champions.

The Dukes would tally the only goal of the second as the dynamic duo of Frank Pucci and Ben Evans recreated their Buckland Cup magic with Pucci pulling the trigger at 15:21.

The North Stars chased the game for most of the contest and through 50 minutes of play had tested Wellington netminder Jonah Capriotti just 10 times.

Brendan Gillis would finally break the Capriotti shutout bid with less than two minutes to go but 4-1 would be as close as the North Stars would get.

In the evening game, the host Dryden Ice Dogs took some time to find their game but eventually over came the Cochrane Crunch 3-0.

The Crunch, who have yet to score at the 2018 Central Canada Championships through two games, take on Wellington today at 3:30.

This evening’s contest which sees a rematch between the Bill Salonen Cup finalists should be a war on ice as Dryden and Thunder Bay renew hostilities.

Those interested in viewing the Wellington game are reminded that all Dukes games are available to be watched at Highline Hall.