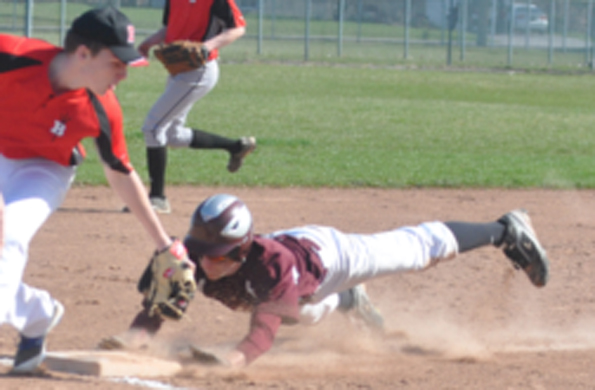 Safe at third - PECI Panther Chase Lavender reaches the base under the tag of a Bayside Red Devil Monday. Lavender has been a productive offensive contributor early in the year. (Adam Bramburger/Gazette staff)

The PECI Baseball Panthers only managed to take the field once to practice before opening the Bay of Quinte Conference season, but it hasn’t seemed to affect their performance.

The defending league champions returned to the diamond with a 10-0 win over the Nicholson Crusaders Friday and followed that performance with an 8-1 triumph over the Bayside Red Devils Monday.

Against Nicholson, the Panthers got started early as John McHugh walked in the first inning and manufactured a run with smart base running. They added two in the second as leadoff man Chase Lavender reached base on four balls, then Will Ronan cashed him in with a double.

They would capitalize on some Crusader pitching problems for a max five-run inning in the fourth that was capped by a Nolan Steen double. The fifth inning saw a repeat of the second with Lavender walking and Ronan knocking him home with a double. Ronan and Braedan Kelly each hit twice in the game.

On the mound, Kelly, Ben Wells, McHugh, and Ronan combined for a no-hit shutout.

Against Bayside, the bats had a tougher time getting going as Kelly would be the only Panther to reach base through three innings. He doubled, stole third, and scored on a Jordan Stacey fielder’s choice. Lavender singled and produced a run in the fourth, then the Panthers exploded on the Red Devils’ relief pitcher for a five-run fifth. Catcher Drayden McQuaid hit a two-run double to the left-field fence as part of that rally.

Lavender went three-for-four with two doubles in the game. Ronan and Kelly were each two-for-three.

Pitching-wise, Brodie Byford, McHugh, and Kelly split the work, each hurling for two innings in a one-hitter.

Overall, coach Matt Ronan said he likes what he saw.

“I was pleased we were hitting the ball. We faced a good pitcher those first four innings (against Bayside) and we slowly got to him,” he said. “The pitching was great. We’ve gone through and used five different pitchers in two games and given up just two walks. They’re pounding the zone and mixing up our pitch selections.”

Though the coach acknowledged there will be mistakes with how seldom teams were able to get on the field this spring, he feels the Panthers have room to grow if they get their bats moving a little more. Defensively, PECI has also impressed going without an error despite playing deep into its lineup.

“We’re 20 deep. When you can move guys in and out it says so much and it gives us so much flexibility and latitude,” Ronan said.

The Panthers have two games on their schedule next week, in Melrose against Centre Hastings, Monday, and Moira, Wednesday. Both are at 4 p.m. Their next action at the Field of Dreams Complex will be May 15 when the Centennial Chargers visit Wellington at 4 p.m.