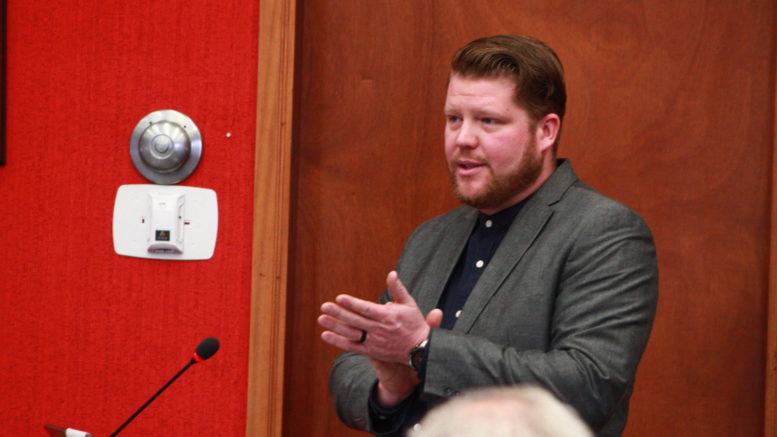 The municipality may investigate physical means to slow traffic at the edges of the county’s towns and villages.

Committee of the whole supported a motion last week to have staff prepare a report on methods, outside of signage, to slow traffic near residential areas. That motion was made following a deputation from Wellington and District Business Association chair Evan Nash and will come before council for approval on May 8.

Nash told councillors speed is a huge problem in Wellington and something needs to be done to correct it.

He said there have been two collisions in Wellington involving pedestrians and another recently in Picton. One of the three resulted in a fatality.

“I would suggest that warrants some action,” he said. “I feel like we’re failing to provide basic safety to our community at this point.”

Take a walk around any small town or village in the county and you’ll see much the same as what’s taking place in Wellington, Nash said. He said the WDBA is working with the local detachment of the OPP to place speed display signs at the edges of the village. The business association has also committed dollars to purchase their own speed display signs, he said.

While Nash said he didn’t believe the expense should fall to the business association, the extent of the problem has prompted members to collect funds to make the purchase. He said the issue has generated some strong feelings among many residents of Wellington.

“We have a school on Main Street where kids get loaded and unloaded and sent off to school, we have a farmers’ market there, a park, a post office where you see senior citizens every day trying to get out of their car, get their mail, and get back to their car without getting hit by a Mack truck coming through town at 85,” he said.

He suggested there could be some traffic-calming measures put in place.

“Every little town everywhere has some sort of pinch point somewhere that slows the traffic down before you get there,” he said.

Nash said he wanted to ensure council knows how important the issue is to the people of Wellington.

The municipality has one set of speed display signs currently which are moved to various points throughout the county. Funding to purchase two more sets was included in the 2018 budget and those are in the process of being delivered.

Councillor Jamie Forrester agreed speeding is an issue in almost every town, village, and hamlet in Prince Edward County. He put for the motion to have staff investigate physical traffic calming measures, such as speed bumps, that could be put in place to address the issue.

“We really need to investigate this long term because signs don’t work,” he said.