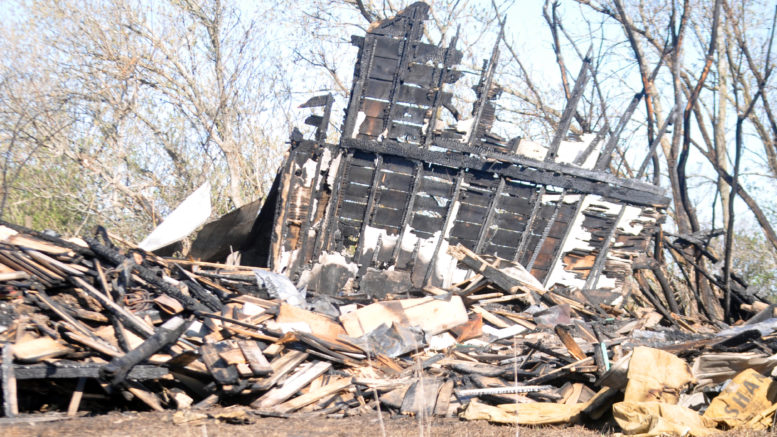 Suspicious blaze - Prince Edward OPP officers were called to Fish Lake Road Saturday morning to investigate the cause of a structure fire at this abandoned house. (Adam Bramburger/Gazette staff)

The house, located between Norton Road and Robinson Road now sits as a charred, blackened pile of rubble. The Ontario Fire Marshal’s office did not attend the scene to investigate, leaving the local police detachment to continue searching for clues regarding the blaze.

Driver charged with impairment by drug

In the wee hours of Feb. 21, Prince Edward OPP officers were called to a vehicle found in the middle of a road within Consecon. The female driver was observed to be unconscious and paramedics made attempts to revive her. The woman was ultimately transported to Trenton Memorial Hospital where she was revived and made a recovery.

Police say their subsequent investigation revealed the woman had taken illegal street drugs prior to driving and losing consciousness behind the wheel.  On Sunday, a 20-year-old Picton woman was charged formally with having care and control of a motor vehicle while impaired by drug. She is due in Picton court May 30 to face the charge.

No major incidents were reported.

On Friday, shoreline and launch area safety checks resulted in four boats being prevented from launching due to non-compliance issues and another two boats for having insufficient life jackets or personal flotation devices.  The OPP’s marine patrols left the water around 4:30 p.m. due to high winds and potential thunderstorms.

Saturday, the OPP patrolled the Bay of Quinte and reported the majority of boats were in compliance with relevant laws. There was one boat rescue of a vessel broken down near Trenton. Police charged one boater under the Canada Shipping Act for speeding through a no-wake zone and issued warnings for six minor Canada Shipping Act infractions. No alcohol violations or life jacket violations were reported.

Over the course of the weekend, about 300 vessels were checked at launches and on the water.