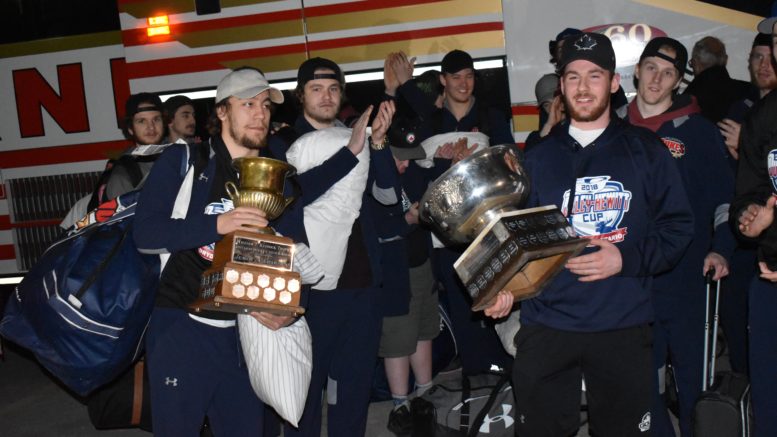 What a run - The Wellington Dukes' amazing post season ended with a 4-2 loss to Chilliwack Sunday, but the team gave its fans plenty of memories this season, including bringing home the Dudley-Hewitt Cup as central Canadian champions. (Jason Parks/Gazette staff)

You can forgive Wellington Dukes assistant coach Derek Smith if he had a slight twinge of deja vu as the club’s bus entered the village Sunday night.

Could it really have been just 15 years ago he and his 2003 Wellington Dukes teammates had returned from Fort Frances, ON in the dark of night with the Dudley-Hewitt Cup in tow to a joyous reception at the old Dukedome? 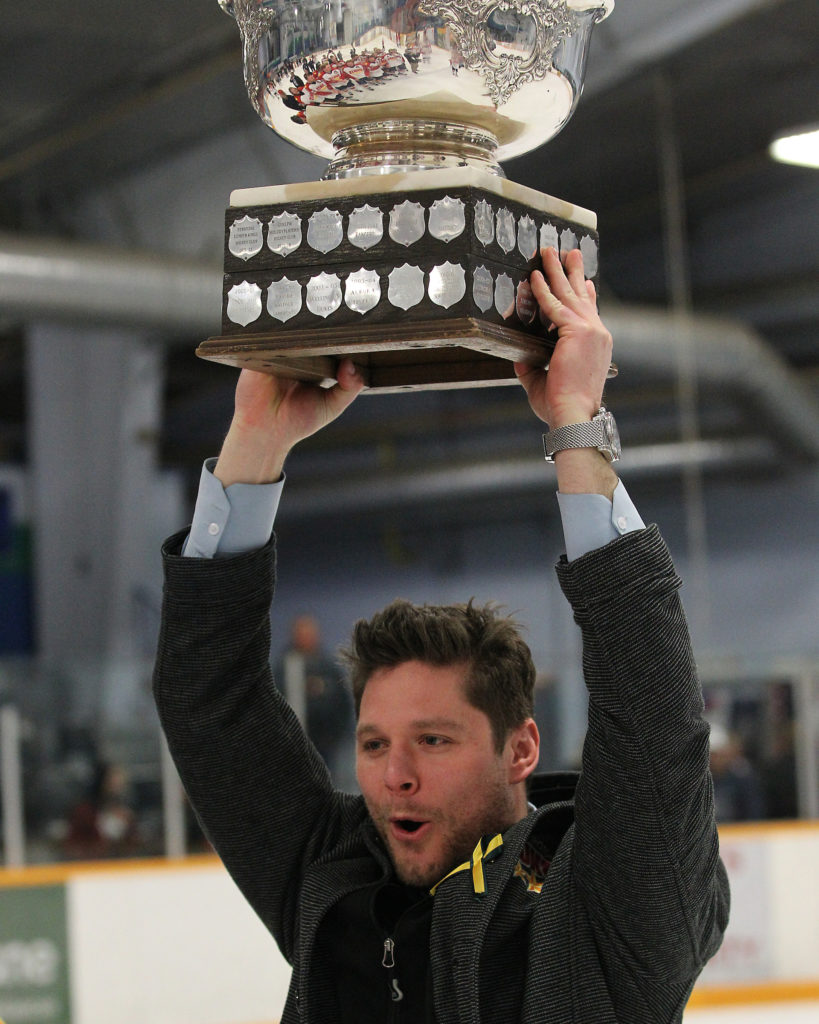 Flash forward a decade and half later almost to the day and there was Smith, a former NHLer and a newly minted member of the club’s staff, disembarking a bus to an appreciative cross section of fans that braved a light rain and east wind to fete their hockey heroes and the Central Canada Jr.A Championship.

Yes, it’s been a long, strange journey for Smith but also for these Wellington Dukes and neither he nor the team members could have imagined Sunday night’s reception of applause and ringing maple syrup cans back in September if they were being honest with one another.

Smith praised the 50 or so fans, many of them youngsters, who showed up and cheered their loudest as team helper Joe Lavender emerged from the bus with the William Rudduck Ontario Hockey Federation Junior A Championship trophy and then watched as team captain Colin Doyle descended the steps of the charter with the Dudley-Hewitt Cup.

“This organization is great, it’s built up from the community and the people who love this team and a rally like this just goes to show the support we have,” Smith said. “This team has pushed hard in these playoffs and dealt with some adversity but to come home and see the support like this is amazing.”

After an opening game setback where they dropped a 4-1 contest to the host Dryden Ice Dogs, Wellington got motivated to start doing all the little things that can swing pressure-packed hockey games.

“(Dryden Memorial Arena) is a tough and hostile building to play in and we were coming off a lot of travel,” Smith said of the opener. “We knew that it was going to be matter of getting a little better each day and the players had worked way too hard and they weren’t going to be denied this weekend.”

After finishing in second place through the round robin portion, Wellington drew the Thunder Bay North Stars of the Superior International Junior Hockey League in the semi-final on Friday night and dispatched the Bill Salonen cup finalists 6-3.

In the finals, the Dukes got their revenge on Dryden, taming the host Ice Dogs 7-4 in a back-and-forth affair that saw the Dukes pull away in the final ten minutes of the championship game.

The club was able celebrate it’s third Dudley-Hewitt Cup as a franchise on Saturday night with player’s parents as well as a small group of loyal fans that were able to make the trek to Northwestern Ontario. 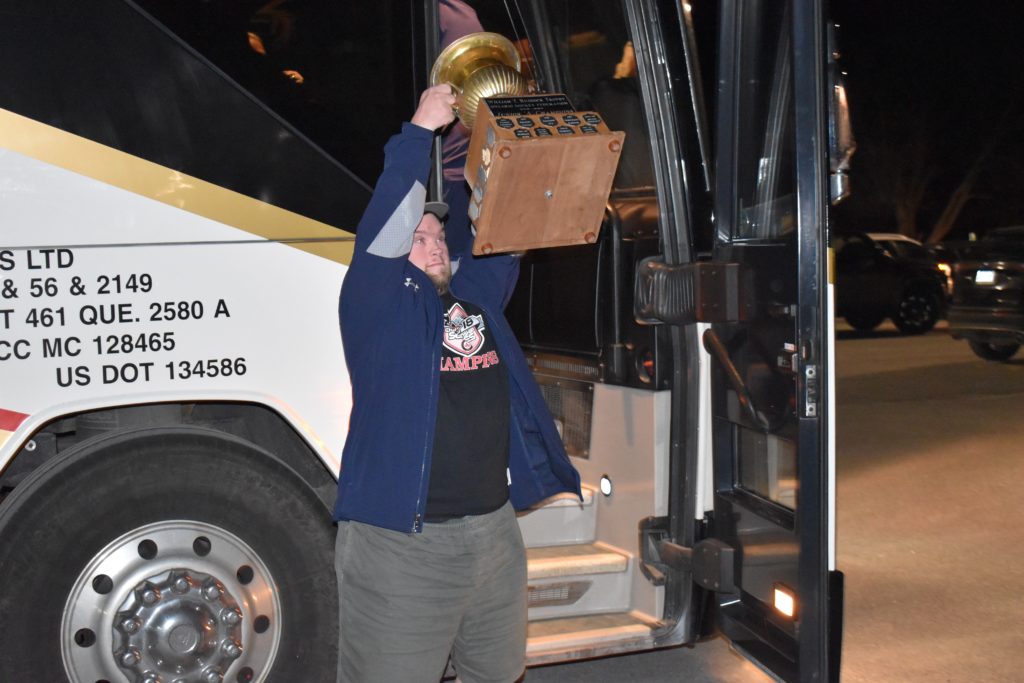 “We got to celebrate the Dudley-Hewitt Cup and get this championship out of the way but we still have an ultimate goal of a Royal Bank Cup championship and we are focussed in on that now,” Smith said.

Doyle took a moment to praise the group of diehards that formed receiving lines on either side of the bus door to the exterior entrance to the Dukes dressing room, calling the group the best fans in junior hockey in Ontario.

“We do have the best fans in Junior hockey. Some of the boys were a little surprised to see fans here welcoming us home but it was awesome to see,” Doyle said.

After dropping the Dudley-Hewitt Cup opener, the club needed to kick into survival mode and basically win out if they wanted to move onto the RBC Cup next weekend in Chilliwack, BC.

Doyle said the club always knew what was at stake and never gave up on their collective dream.

“It was a crazy and we never quit. It was a battle each and every night with this group and good things happen when we stick together,” Doyle said.

In terms of scoring leaders for the tournament, Doyle didn’t produce offensively with the regularity fans were used to seeing in the 2018 Ontario Junior Hockey League playoffs. 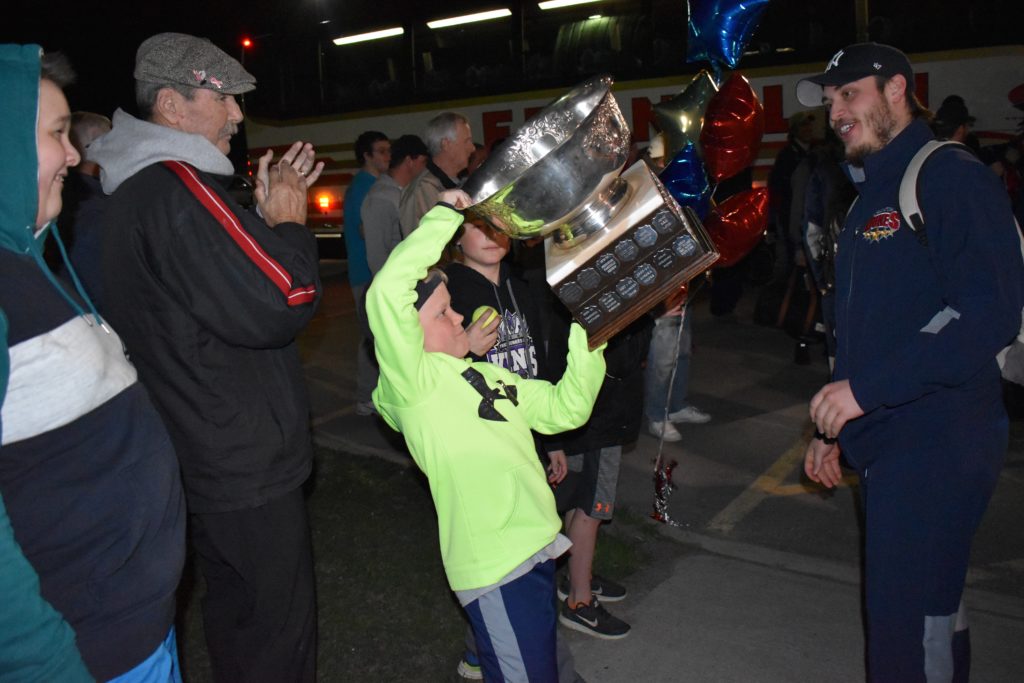 With a single tally and a couple of helpers, Doyle might have had a quieter tournament than he was expecting at the outset however this captain is clearly a step ahead when it comes to the most important factor at this time of season-leadership.

Doyle admitted he landed on the score sheet less often than he would have liked but spoke highly of the club’s depth and ability for one line to run dry for a period of time and have the rest of the forward units continue to roll.

“The chances were there for me but I didn’t get the bounces at the right times. But everyone stepped up this week,” Doyle said. “We’ve got such great depth on this team and we can hurt teams in a lot of different ways and when one line isn’t going, the next line steps up and carries the the ball for a while.”

Wellington was off on Monday and expected to be back on the Essroc Arena ice on Tuesday for practice.

It was rumoured the club would be departing for Chilliwack, BC on Thursday morning although the departure date and time has yet to be confirmed.