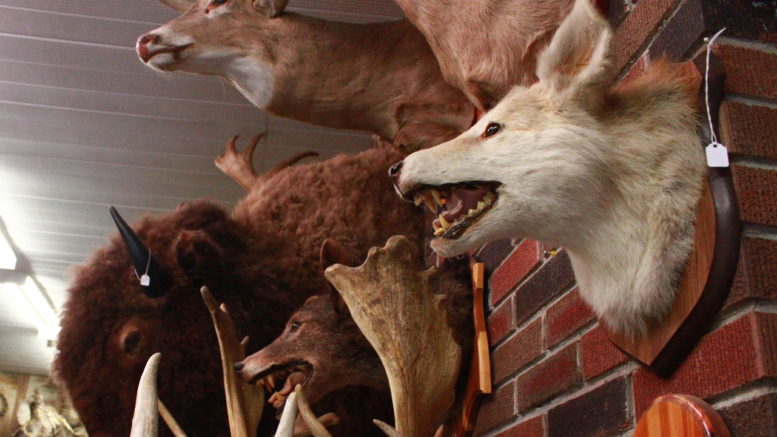 The fundraising campaign to relocate the de Vries taxidermy collection to a new home at Ameliasburgh Heritage Village is nearing its $154,000-goal following the announcement of a significant grant from the Parrott Foundation this week.

The John M. & Bernice Parrott Foundation made the major $85,000-contribution to the de Vries Natural Heritage Collection Project after receiving an application submitted by the Friends of Ameliasburgh Heritage Village.

“We are so thankful that the John M. & Bernice Parrott Foundation see the merit of this unique collection and how it will benefit our community for years to come,” says Friends of Ameliasburgh Heritage Village chair Sheila Eagen in a news release from the municipality.

A volunteer group has worked with the County Museums throughout the project, which will see the late Jake de Vries collection of nearly 500 taxidermy specimens relocated to the village’s green barn. The collection includes a range of animals from waterfowl and song birds to reptiles, fish, and mammals. The release says it is estimated to be one of the finest private collections of taxidermy in the province.

The de Vries family has offered the collection to the County’s museum system with the goal of keeping it intact and accessible to the broader community. Museums head curator Jennifer Lyons says it’s a collection that has the potential to amaze visitors.

“The diversity of the collection will astound people. It is sure to bring a growing interest in Ameliasburgh Heritage Village,” says Lyons “It’s an educational resource that has no comparison locally or even regionally.”

Museum staff and volunteers identified the green barn at Ameliasburgh Heritage Village early on in the project. The building has plenty of space, but does need significant structural and environmental upgrades to make it suitable to house the collection long term. In addition to renovations, there are costs to exhibit the materials including hanging systems, interpretive panels, and cases.

With the Parrott Foundation grant, the project is less than $6,500 from its goal. The Prince Edward County Stewardship Council and the Stark Foundation have also made major contributions to the project. If the project is able to close its funding gap this year, it will coincide with the 50th anniversary of Ameliasburgh Heritage Village.

Picton’s Macaulay Heritage Park will host a special travelling exhibition from the Royal Ontario Museum on northern owls from May 13–July 8. The exhibition is made possible through a grant from the Department of Canadian Heritage’s Museums Assistance Program. A dollar from each admission fee will support the de Vries Natural Heritage Collection achieve its fundraising goal.