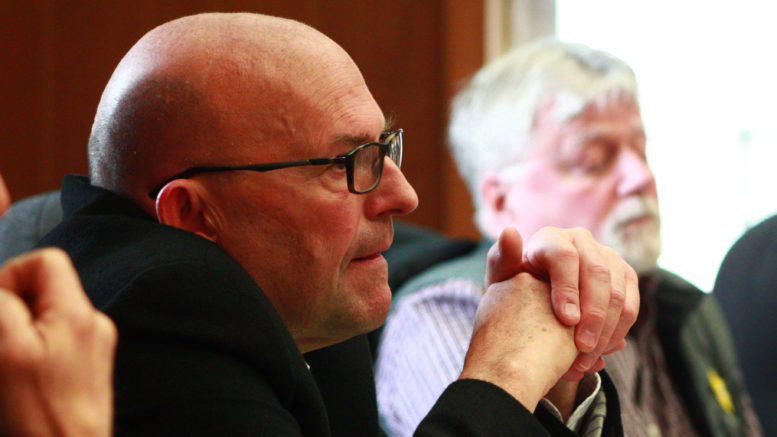 South Marysburgh councillor Steve Ferguson is hoping to have a seat around the council horseshoe in December — just a different one.

Last week Ferguson became the first candidate to file nomination papers for the mayor’s position. Ferguson has served one term on municipal council and, while he said he had no municipal experience prior to being elected back in 2014, he believes he has what it takes to represent the municipality.

His plans for the upcoming municipal race began last year when he decided to approach residents around the county to gauge his performance as a first-time councillor. He said upon receiving positive feedback he was prepared to make another run.

“I’ve loved the job as councillor, just absolutely adored it,” said Ferguson. “Some people look at me like I’m crazy, but I really have enjoyed it.”

The decision to run for mayor instead came following Mayor Robert Quaiff’s announcement that he would be seeking to represent the Liberal party in the upcoming provincial election. Ferguson said having earned the confidence of South Marysburgh voters, he felt confident putting his name forward.

Asked what skills and qualities he would bring to the mayor’s position, Ferguson pointed to his enthusiasm and commitment as a councillor. He said that passion shows in his attendance record, having missed just five meetings in four years. He’ll also bring skills developed during a career as an executive.

“It’s been proven in my management career that I’m a pretty good team builder,” he said.

When it comes to dealing with difficult issues, Ferguson said residents can count on him making decisions only after a thorough evaluation.

“What I think I’ve been able to prove to people is that — even though they may not like a decision I make — they certainly understand that, before I make it, I’ve looked at it from every angle,” he said. “That is very important when you’re sitting in that chair.”

Ferguson, president of the Prince Edward Historical Society for the last eight years, has a compelling history. Since 2011 he’s served as editor and publisher of the South Marysburgh Mirror and might be the only current council representative to hold a U.S. patent (for a flexible tear-resistant plastic hinge to be used in merchandise displays).

Ferguson graduated from York University with a degree in English and history. His career began in the music business, with what is now Warner Music Canada, where he worked in sales. He became the senior sales representative there before helping to establish Warner Home Video in the Canadian marketplace. Later, Ferguson was recruited to become vice president of sales and marketing at Bellevue Home Entertainment where he negotiated Canadian distribution licences with major film studios such as Paramount Pictures, Disney, and Warner Bros. From there he moved on to become president of merchandising and display company Vidpro Canada and later Vidpro International specializing in retail point-of-sale products for merchants including Wal-Mart, Radio Shack and Toys ‘R’ us in Canada, the United States and the United Kingdom. Upon leaving Vidpro, Ferguson moved into freelance writing and editorial work, crafting digital and traditional publications for corporations as well as ghostwriting non-fiction work. He’s worked in the field ever since.

“I vividly recall driving down through Carrying Place and Ameliasburgh into Hillier, taking the scenic route through Wellington and thinking ‘Oh my God, how come nobody knows about this,’” he said.

During that first visit, he said it felt like home. After that, he made many more trips to the county before finally deciding to relocate here full time with his partner, Mary, in 2008.

There are plenty of burning issues that Ferguson considers critical to Prince Edward County moving forward — a new hospital, affordable housing, employment, food security, and protecting and promoting local heritage. He said he would also look to build a greater sense of the county being one community rather than many. If elected, he’d look to make sure councillors visit each ward during orientation and educate themselves about all areas of the municipality.

Ferguson stressed he didn’t see being mayor as a part-time position and would approach the office as a full-time commitment.