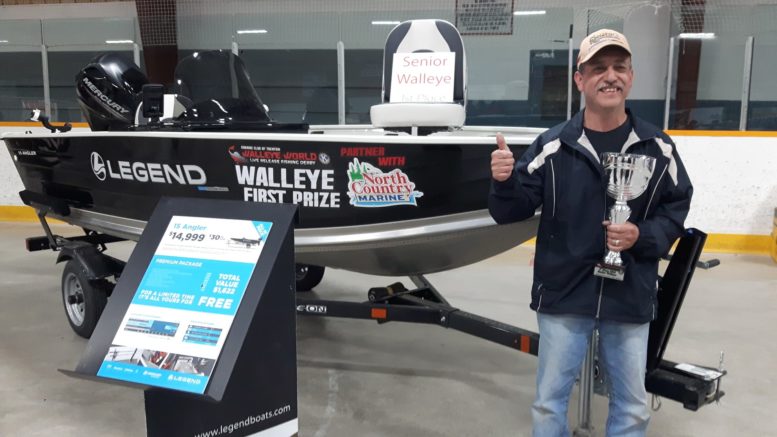 The top catch in the 38th annual Kiwanis Walleye World Fishing Derby was caught in Picton Bay by a Picton resident.

Terry Mindle reeled in the prize-winning 12.69-pound fish, earning himself a Legend fishing boat, Mercury outboard motor, trailer, and accessories valued at $15,000. Following the excitement of the weekend, Mindle said things were slowing down when he spoke to the Gazette on Tuesday afternoon.

“I think the adrenaline kept me going, but now I’m getting a little bit tired,” he laughed.

Mindle, who works at Prince Edward County Memorial Hospital, said he’s been entering the derby for years and the most he’d won to this point was a door prize.

“This is definitely the biggest thing I’ve ever won in my life,” he said.

The catch in question came by chance. Mindle has fished for the past five years with his son Travis and Travis’ friend Kyle Creasy. It was a particularly windy weekend and that forced the trio from their usual launch point at H.J. McFarland Conservation Area and further down into Picton Harbour on Sunday morning.

“We come out of the harbour and you could see it was really rough — a lot of whitecaps out there,” he said.

Rather than chance going further out, they stayed close to shore and trolled near Merland Park. At about 10 a.m. Mindle got a bite.

“We trolled down there three or four times and I had just changed my hook,” he said. “I knew it was heavy — you can tell when you catch something if it’s a heavy fish or not — but I didn’t realize it was that size, of course, until I saw it swimming by the boat.”

Mindle gave Travis credit for some quick action with the net and they loaded the walleye into the livewell and took off for the Picton weigh station. Seeing his name rise to the top of the leaderboard will be a lasting memory.

“It was a great weekend, that’s all I can say,” he laughed.

As of yet he has no plans for the new Legend boat.

More than 5,000 anglers hit the water for the derby last weekend.

Mark Kuiken earned the prize for top pike with his 16.15-pounder, taking away a $8,000 package including a boat, motor and trailer.

The leaders in the junior walleye category were: Noah Garrison at 9.08 pounds; Nate Hamilton at 8.35 pounds; Owen Barnacle at 7.65 pounds; Alley Laffrenier at 7.25 pounds; and Aidan Quinn at 7.03 pounds.
The leaders in the junior pike category were: Matthew Moore at 10.25 pounds; Ethan Caley at 9.85 pounds; Sierra Melo at 9.14 pounds; Tyler Bradley at 7.89 pounds; and Logan Leclerc at 6.26 pounds.