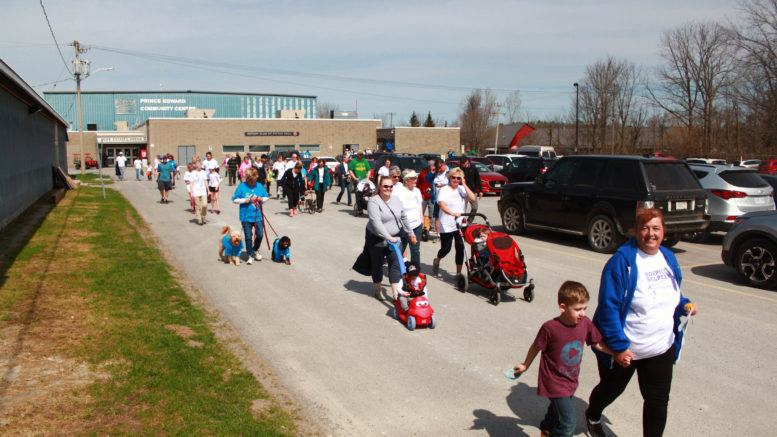 Hikers begin either five or two-kilometre routes during the seventh annual Hike for Hospice at the Prince Edward Community Centre on Sunday. (Chad Ibbotson/Gazette staff)

Walkers raised more than $25,000 during the seventh annual Hike for Hospice on Sunday morning.

Although online donations were expected to add a few hundred more dollars to bottom line, the seventh annual Hike for Hospice had raised about $25,525 as of Monday.

Hospice Prince Edward president and board chair Peter Matthewman told the Gazette about 250 people participated along with about 50 volunteers who assisted walkers in various capacities. Matthewman said those volunteers weren’t only associated with hospice, but included many local individuals and representatives from service clubs. In addition to the Frere Brothers and Picton Rotary who each donated their time, Scott Wentworth donated a memorial tree for the event, and Lockyer’s Country Gardens donated plants for volunteer prizes. Realtors Chestnut Park also donated $5,000 as one of the main sponsors of the event.

Participants were treated with music from The Frere Brothers as well as a barbecue lunch courtesy of the Rotary Club of Picton following the hike.

“How could you not have fun on a day like today,” Matthewman said, noting the weather was much improved over last year’s rain.

He said the event is an important one for hospice in several ways.

“This is a special event for us every year because it’s a family event and it’s the only time of year when we can get all the families out — the kids in strollers, we have pets, we have dogs dressed up, we have a team from Cressy,” he said.

In addition to bringing together families, the event is a critical fundraiser for hospice. Hospice Prince Edward runs three programs — a grief and bereavement program with 12 volunteers, the three-bed residential hospice which benefits from 20 volunteers, and an outreach program with 40 volunteers that work with families in their own homes. Despite those volunteer hours, hospice relies on fundraising to operate.

“We need $18,000 a month to keep hospice going beyond what the government provides to us,” said Matthewman.

The hike increases hospice’s visibility and is an important way the organization is able to spread word of their available programs, said Matthewman.

“It’s raising the profile and helping people understand what the hospice can do for families and their loved ones in their time of need,” he said.

Additionally, the event allows families an opportunity to have an open and frank discussion about the final stages of life and what it means to have a life-limiting illness.

Sunday’s opening ceremony saw St. Gregory Catholic School Grade 7 student Gabby Kinnear share a speech about hospice and her family’s experience with the organization. The speech was dedicated to her grandfather, Harold Ingram, who died from cancer in June 2017. Kinnear said until that summer, she didn’t know what hospice was. 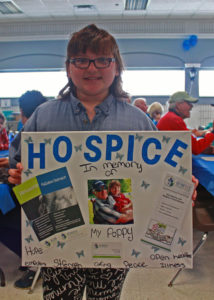 “They help so much, so that’s why I did my speech on it,” she said. “If he had any questions, they would come and answer and if we needed their help they would just be right there.”

She said there were mixed feelings about approaching hospice. It felt good knowing there was someone to turn to, but there was also hope the family wouldn’t have to. She said hospice is an important community service.

“If they didn’t have this there wouldn’t be a lot of people in comfort as they’re moving on,” she said.

Diane Ferrier said it was important to support the organization through events like Hike for Hospice to ensure it remains available to the community.

“If we don’t fundraise for it now, it may disappear before our time comes,” she said. “It’s such a valuable service — we need it in the county.”

One of the great things about hospice, Ferrier said, is that it’s accessible to anyone in the community. Hike for Hospice helps ensure the organization is visible and helps spread the word of hospice programs to those who might not know about them.

“It’s a beautiful service,” she said.

She said Hospice Prince Edward is special in that, with its residential hospice, it offers a service that isn’t yet available in many communities.

“Even bigger communities don’t have that, so we are really blessed,” she said.

Matthewman also announced that local volunteer Birgit Langwisch had received the June Callwood Award which was established by the Hospice Association of Ontario in 1994 to acknowledge and thank outstanding hospice volunteers throughout the province. Langwisch has spent 22 years with the organization and it was under her direction as president that Hospice Prince Edward opened the residential facility.