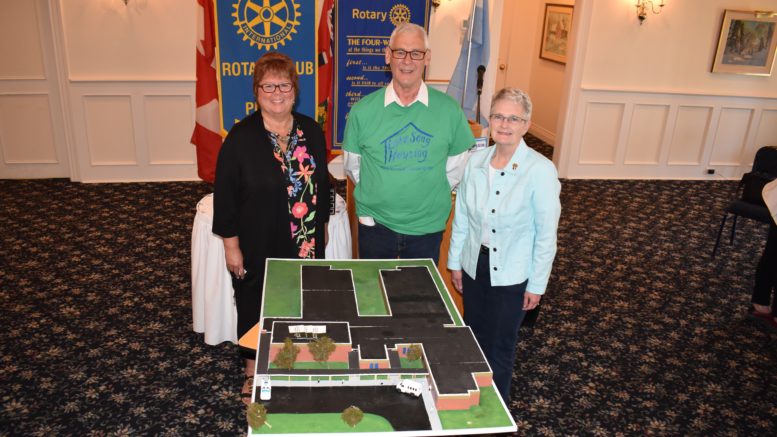 Leave it to a retired educator on teacher appreciation day to capture the hearts and minds of the members of the Rotary Club of Picton.

On Tuesday the local service club was able to get an ear and eyeful of the LoveSong Seniors housing and community project on thanks to committee members Ken How and Joy Vervoort at their weekly meeting and, judging by the questions and responses, the Rotary membership by-and-large understands need for such a concept locally.

LoveSong is a faith-based, not-for-profit organization attempting to secure the former Pinecrest Memorial Elementary School in Bloomfield and turn the facility into a 50 unit seniors co-housing complex and hub.

Vervoort explained the LoveSong organization’s motivation is that he dedicated group of volunteers firmly believe that “we are our brothers keeper” and that the dwindling availability of affordable housing in Prince Edward County is having an affect on the people in the community.

As the senior population is the fastest growing segment of the Prince Edward County population and nearly 50 per cent of the entire population is made up of people 55 years of age or older, it’s clear some strategies will be needed if county natives wish to spend their golden years locally.

Especially considering the number of long term care on this side of the Norris Whitney bridge and the the province of Ontario being loath to allocate more.

That’s where LoveSong is attempting to create a facility that could be a bridge to a larger complex while also easing the burden on both local affordable housing units for the general population as well as potentially alleviating some of the congestion issues at local hospitals and long term care homes.

“We can increase the supply of affordable rental housing in the community while promoting independent living for vulnerable seniors that are dealing with the issue of isolation. This will reduce the burden on local hospitals and long term care facilities by extending independent living,” Vervoort said. “We are creating a new model that can be replicated provincially and nationally, one that demonstrates that a repurposed school can be turned into a cohesive community to can support the aging population and a local neighbourhood.”

Vervoort told Rotary club members LoveSong recognizes access to safe and affordable housing is a basic human right that should be available to all seniors regardless to their ability to pay and the project will serve to better the lives of seniors facing the challenges of aging on a fixed income.

And the 50-unit hub that will lean heavily on shared common space to instill that sense and feeling of community and cohesiveness amongst residents.

“We are looking to create an environment that encourages seniors to live independently within community while celebrating knowledge and skills and actively participating with neighbours and the broader community,” Vervoort added.

How, a well respected educator during his time with the former Prince Edward District School Board, knows the Pinecrest school well.

The LoveSong concept was in the dream stage prior to the school being declared surplus to the needs of Hastings and Prince Edward District School Board but when the announcement to consolidate students at PECI in Picton was made, it became clear to How that the former elementary institution could have a rebirth and serve the community in a meaningful way.

To build a facility of similar scope and size would cost in the neighbourhood of $50 million but the LoveSong group, judging by similar projects, estimate Pinecrest could be retrofitted for about $4.6 million or $100 a square foot.

While the school was one of the several Centennial-era education facilities built in Prince Edward County around 1967 and there are some upkeep issues, the building shows the care that was paid during its construction.

The school is steel framed with cement block infill.

In terms of amenities, How said the 10,000 sq. ft. Gymnasium, craft studios and woodworking studios are just a couple of many possibilities that would be life enhancing and communal options for residents.

And with 20 acres, there could be more phases and expansion possibilities for the LoveSong project.

“When we’ve got the building, I think we can get more specific. Right now, we are trying to sell you on a concept, a project,” How said. “Once we get the building we’ve got a business plan that is already in place we can follow a step by step produce.”

Once the facility undergoes the final disposition process as an unneeded crown asset, retrofitting work can commence.

Should the timeline be adhered to, How believes residents could start moving in by the end of 2020.

In terms of pricing, the rental units will be priced below regular market value for affordable housing spaces and certainly well below typical Prince Edward County rental prices.