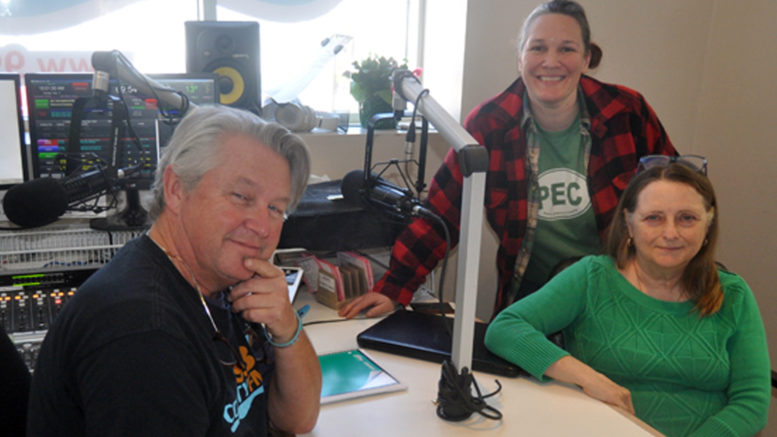 From today through Sunday, station will feature over 60 local musicians as part of fundraising effort

99.3 County FM has one goal as it embarks on its third radiothon over the next four days: Pay off the debt.

The volunteer-run radio station borrowed $150,000 in the lead up to broadcasting and though it has worked diligently to eliminate that bill, some $65,000 still remains.

Board chair Jim J.J. Johnston said that outstanding debt is keeping the station from taking the next steps in that growth, like advanced automation to be able to broadcast more live events or to renovate and add new sound booths to the tight quarters at the County Farm Centre.

“At the board level, we discuss that all the time: How do we take down that debt?” he said. “We’re doing pretty good, but we decided we’d let everyone know. Last year, our radiothon goal was $30,000. This year, we’re setting it at the whole $65,000 and we’re going to do our best to get there.”

The station’s general manager, Deb Simpson, says that 99.3 County FM will be in radiothon mode from 8 a.m. to 8 p.m. from today until Sunday. Some 40 acts featuring over 60 musicians will be playing live from the studio. A series of locally written and produced radio plays will also hit the airwaves at noon each day.

“We’re really excited about it. We’ve got every genre, from jazz to reggae to big band, pop, classical — you name it. It is going to be fantastic,” she said. “We’re hoping to get people who haven’t been to the station before peering in the windows and watching people play.”

While they’re there, it is hoped visitors will offer donations. The station can take credit cards, cash, cheques, or online pledges at 993countyfm.ca. Another interesting promotion, arranged by County Grapevine host and producer Lynn Pickering will allow people to visit the studio between 10 a.m. and 3 p.m. today and tomorrow and from 9 to noon on Saturday to record special Mother’s Day greetings for $20 each. The greetings will air three times this Sunday.

Over the past four years, the radio station has found a niche as a member of the Prince Edward County community. Simpson said it shares over 6,000 community service announcements annually and there are in excess of 100 volunteers involved in programming and other aspects of the station’s operations.

“We’ve become an essential service,” Johnston adds. “We are the big megaphone for all the public service organizations out there. We also make sure we’re playing our county musicians on a regular basis.”

All of that effort is hard work.

Johnston notes that most volunteer-driven organizations may conduct business in a typical 9-5 work day or hold a few special events, but 99.3 County FM operates around the clock seven days a week. It also must contend with the misconception that it is just another commercial radio entity.

“People kind of lump us in with other radio stations. We have our advertising base that we’ve worked hard at but it’s not the same (as commercial radio). Relying on the community, it’s a daily grind.”

Johnston said the station’s programming system is a fairly basic model that they’ve pushed to the limit to be able to offer the range of programming on air. At some point, a more complex system will be needed to take on the workload. Unlike commercial radio stations, the sheer volume and variety of specialty programming offered at 99.3 County FM means there is a premium of digital space available for music, shows, and for other recorded content.

The station itself also had a very basic space configuration and that has been limiting growth. Simpson said a number of contributors work on their materials at home now and that is a disservice to them.

“That’s not very collegial, they don’t get the energy of the station but there is just no room for them,” she said. “We have to get rid of that situation, but we have to pay back our debts first.”

Typically, Simpson said volunteers put in at least another hour for every hour of air time they offer in programming and for spoken word, preparation time can take up to 10 times as long as on-air delivery.

Recently, the station did manage to work out a deal with the County Farm Centre to add a new room that offers almost as much space as its existing studios and offices. While Peter Morkis and The Woodcrafters generously spruced up the area, it still needs to be finished.

Simpson said more sound booths could be added there and Johnson said there has been some consideration of having a performance space where musicians can go to record.

“We’ve got big plans,” said Simpson. “We’re enjoying the room, even though it’s not yet finished. It’s a place we can go and spread out a bit more.”

Since inception, those behind the station have also been proud of the way it has given voices to some who may not have been represented in the media before. The weekly PECI  Panthercast program offers information geared to teenagers that won’t be found anywhere else.

“At first, we thought it would be parents and grandparents listening, but we got a letter from someone last week who always listens to that show. It’s an interesting look at what kids think about today. It’s a lot different than what we had to think about,” Simpson said. Another program, “You Be The DJ” invites people from the community to come in and program content. Community Living Prince Edward recently used that program as a team-building challenge.

Looking back on four years of radio, Simpson and Johnston agree the station is going as they expected or better.

“It both seems like a lot longer than four years and a lot less than four years all at once,” Simpson said. “There’s a lot of things we have left that we want to do, but all in the fullness of time.”