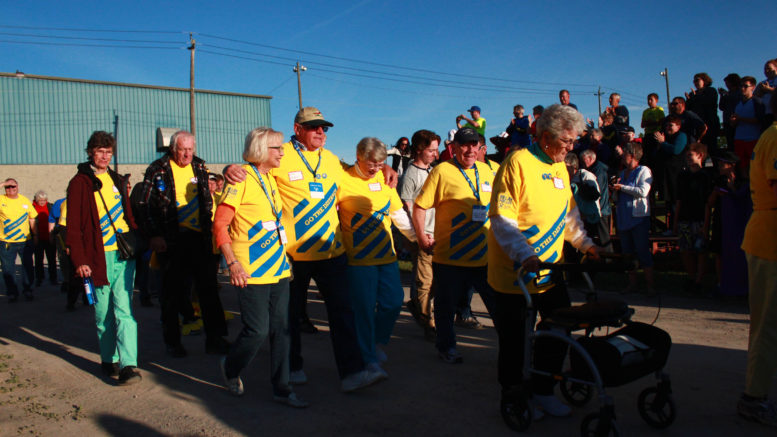 The Hastings-Prince Edward County branch of the Canadian Cancer Society is making a plea to county residents to join the fight against cancer during this year’s Relay for Life.

Lola McMurter, a fundraising specialist with the society, told the Gazette this week that while the number of teams signed up to participate this year is on par with last year’s event, overall participation is significantly down.

So far 14 teams with 48 participants, a little more than half the number that attended in 2017, are signed up.

“We have the same amount of teams that we had last year — which is great — we just need to fill up those teams,” she said. “Some of those teams only have one person on them, so I’ve asked all the teams that have registered to reach out to their network of family, friends, coworkers.”

A yard and bake sale to support the event held on Saturday drew a good crowd and a few more people have signed on to take part in the June 8 event, but McMurter said participation numbers are still behind last year.

While it’s common to see events gradually decline in both participation and dollars raised, the drop-off in the county has been sharp. In the six years preceding last year’s event, Prince Edward County’s Relay for Life events raised $1.2 million. Over the last few years, there’s been a significant decline in the dollars raised. In 2012 the event raised over $216,000, falling to over $78,000 in 2016 and to about $41,000 last year.

McMurter said she’s reached out to the municipality and to local schools to encourage participation in the event, but that hasn’t resulted in an uptick in registrations to this point.

She said it’s critical that residents realize the scope of the problem, noting that one in two people will face a diagnosis of cancer in their lifetime.

“We need to drive that home to people — they’re staggering, scary statistics, but that’s the reality of it,” she said. “Prince Edward County has a higher incidence of cancer than the provincial average mostly because we have an older demographic.”

Money raised through the local relay goes toward cancer research as well as funding programs that assist those living with the disease.

The relay supports the Wheels of Hope program that provides free rides to cancer patients who would otherwise not be able to make appointments. About 271 people in Hastings and Prince Edward counties benefitted from the service last year with volunteer drivers making more than 4,300 trips.

“It’s usually the most marginalized of people who simply can’t afford (the drive) and they just can’t get to the cancer treatment and, without a ride from us, they wouldn’t go,” McMurter said. “…If you live in Waupoos and you need to go to Sunnybrook every day for 45 days for radiation, we’re going to take you every day.”

The event also helps the Canadian Cancer Society offer resources with information about cancer and treatments, as well as a peer support network that offers both online and in-person connections.

“You can connect with somebody who has the same type of cancer you have and you can ask them questions and talk to them,” she said.

Money from the relay also funds a wig room in Belleville where patients who have begun to lose their hair can receive a wig at no charge.

“All of these services are available to everybody in Hastings and Prince Edward County,” said McMurter.

The hub of research in Canada resides at the Canadian Cancer Trials Group at Queen’s University in Kingston. Unfortunately, only about 40 per cent of research projects are able to receive funding, McMurter said.

“We just don’t have the money,” she said.

While not every project can be funded, that research is critical in improving treatments. Cancer survival rates are at about 60 per cent on average, up from about 23 per cent in 1943. Since 1993, funding from Relay for Life events alone has helped improve cancer survival rates by seven per cent.

The theme of this year’s Prince Edward County Relay for Life is Carnival for a Cure. Local volunteers have been hard at work organizing the event, which will feature live entertainment, balloon artists, stilt walkers, and games. The relay takes place at the Picton Fairgrounds from 6 p.m. until midnight.