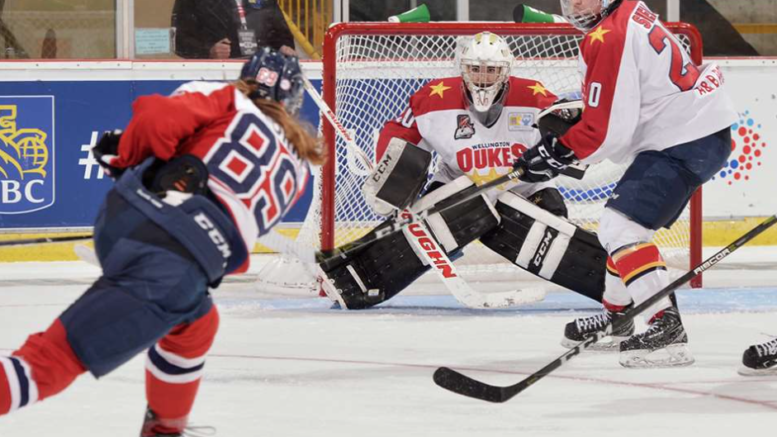 ON TARGET- Wellington Dukes netminder Jonah Capriotti stares down a Gabriel Morin shot during the Dukes 2-1 overtime loss to the Ottawa Jr. A Senators at the 2018 Royal Bank Cup in Chilliwack, BC Saturday. (Matthew Murnaghan/Hockey Canada Images) 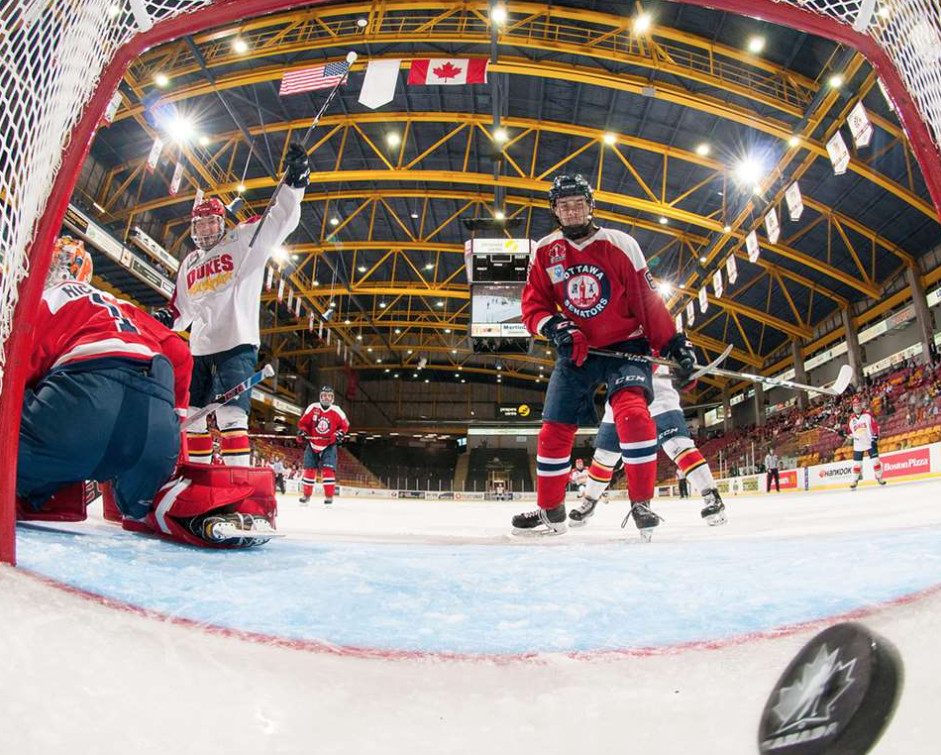 The Wellington Dukes will look to right the ship tonight against the Steinbach Pistons of the Manitoba Junior Hockey League in their bid to be the 2018 Junior A Royal Bank Cup Champions.

Wellington dropped a 2-1 overtime decision to the Ottawa Junior Senators on Saturday afternoon in the opening game of the Canadian Jr. A championship tournament in Chilliwack, British Columbia.

A powerplay goal by the Fred Page Cup champions just 61 seconds into overtime sent the Dukes down in defeat although the club did secure a point thanks to a regulation 1-1 tie.

In a somewhat sloppy 60 minutes of hockey, Wellington had a tough time with the officiating crew as the locals took eight minor penalties to Ottawa’s two.

Still, Wellington would make some hay on an early powerplay chance as Frank Pucci collected a Mason Snell shot off the pad of former Belleville Bulls puck stopper Conner Hicks at with 2:32 left in the first.

After Wellington outshot the Jr. Sens 13-8 in the first, it was the Central Canada Hockey League’s representative’s turn to pound Jonah Capriotti’s net with shots in the second.

After a couple of blown odd-man rushes where Wellington failed to get a decent scoring opportunity, Elie Boulerice would pick the corner on Capriotti just over three minutes into the second stanza.

In overtime, Gabriel Morin would get tackled going to the net by Zach Uens and Wellington was tasked with killing their eighth penalty of the game.

Finn Evans would wind up getting a stick on a Zach Salloum point shot and the puck just squeezed past Capriotti for the game winning tally.

With 24 saves, Capriotti was selected as Wellington’s player-of-the-game.

Wellington meets the 2018 Anavet Cup champions in the only game of the tournament on Monday.

Puck drop at Chilliwack’s Prospera Centre is at 10 p.m. EST and the game can viewed for free online at https://www.hockeycanada.ca/en-ca/national-championships/men/national-junior-a/2018.

The Pistons are 0-1-0 after losing 4-3 to the BCHL champion Wenatchee Wild on Sunday.