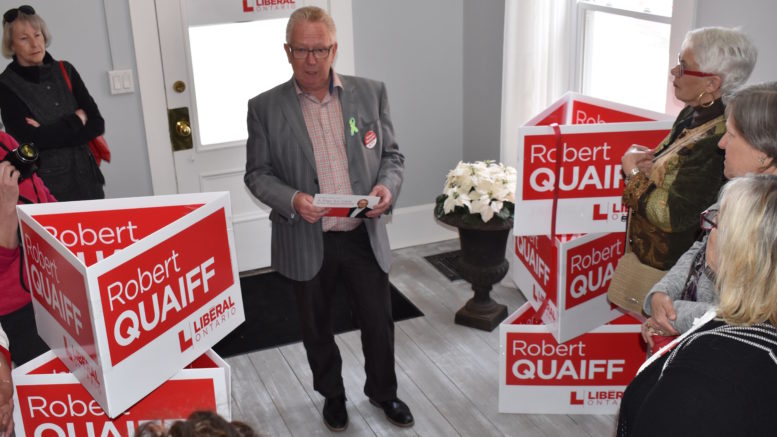 Locals faithful to the Ontario Liberal Party were on hand Saturday afternoon as their candidate of choice in the Bay of Quinte riding in the 42nd Ontario General Election opened his campaign office in Picton.

Robert Quaiff, on leave from his position as mayor of Prince Edward County, cut the ribbon at his office at 126 Main Street in Picton and spoke openly to about two dozen or so supporters about his reasons for seeking higher office in a government that has drawn both praise and criticisms from his current elected post.

Quaiff explained to the Gazette that it was upon his election to the position of Chair of the Eastern Ontario Warden’s Caucus and that group’s connection to the Association of the Municipalities of Ontario that he discovered his desires for Ontario and its people aligned best with Ontario’s Liberal Party.

Expanded OHIP coverage, expanded kindergarten and free medication to Ontarians 25 and younger and 65 and older were among the strategies that struck a chord.

“Being on the board of directors with AMO put me directly in touch with a lot of politicians representing their respective parties and it didn’t take long for me to figure out that everything I valued, everything I was associated with and everything I liked lined up with Liberal platform,” Quaiff said.

In terms of the New Democratic Party of Ontario, Quaiff found he was never able to meet with its leader in Andrea Horwath and the policies are completely different than those of the Liberal party.

“The meetings were basically a group of dejected people writing points down and saying ‘If we were there, we would do this,’” Quaiff said.

In terms of the Progressive Conservative Party of Ontario, Quaiff recalled clearly when former leader Patrick Brown demanded allegiance form elected leaders of municipalities from across Ontario but didn’t offer any indication on how they would help or change things for the better for municipal governments.

“There’s a voice of reason with the Liberal Party of Ontario and there isn’t with the other parties,” Quaiff added.

When he was initially approached to carry the flag of the party on June 7, Quaiff admitted he chuckled somewhat because of his past criticisms of Ontario’s Green Energy Act as it relates to industrial wind turbines in southern Prince Edward County.

The mayor has made it quite clear in previous statements the Green Energy Act doesn’t currently allow for local planning bodies to approve or deny solar or wind projects, a point of contention with many residents locally.

“I asked the party (about previous criticisms) and they told me it was done it in professional, respectful and fact driven manner that they could appreciate,” Quaiff said.

When looking at the current status of industrial wind turbines in South Marysburgh, Quaiff said it was a success that so many turbines have been removed from the original application but maintained that nine turbines “is still not a victory.”

“Nothing has changed,” Quaiff said of his desire to see a GEA that works with local governments. “I want to get a seat at the table and make the changes to the GEA that will make things better for the municipalities.”

Quaiff and his team can be found meeting constituents at their doors in the evening hours and spent a few hours this week in areas such as Bloomfield.

He admitted that the Premier is a topic of discussion but that, for the most part, key investments by the Government are going to the right areas according to many that will cast a ballot next month.

“There are some areas in which voters have concerns with Kathleen Wynne but they are also saying that they really like what the government is investing in. It’s all core values that every Ontarian believes in,” Quaiff said. “We are also hearing at every single door is that people are scared of PC leader Doug Ford and what he represents. It’s the cuts-what is he going to cut? Ford’s announced all these cuts totalling billions of dollars but he’s not saying what he’s going to cut. Is it going to be healthcare, education, what’s it going to be? Nobody knows for sure.”