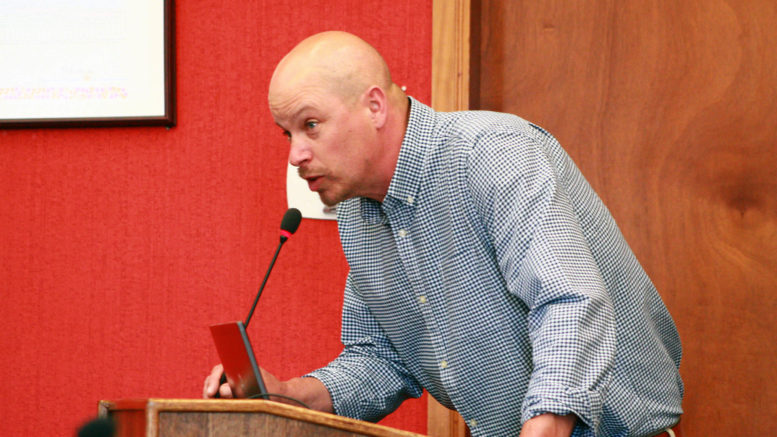 Councillors have directed staff to investigate ways the municipality could assist in a $6,000-installation of a new scoreboard at Wellington’s Field of Dreams baseball diamonds.

During last week’s committee-of-the-whole meeting, councillors supported the motion directing staff to prepare a report on how the municipality could assist financially or otherwise to have the scoreboard installed. The report is anticipated to come back to council at their May 22 meeting.

Ronan told councillors the Rotary Club of Wellington began a project to upgrade the diamonds back in 2015. To date, the service club has provided $20,000 to the project which was used to purchase the new scoreboard and to replace the old wooden seating with aluminum bleachers. The $6,000 toward the installation would help complete that project.

What the groups didn’t anticipate was that the cost of the installation would be so high. Ronan said it’s a high cost and one that neither party has budgeted for.

“We’re tapped out, we just paid $1,000 for the engineering plans to have that installation done,” he said. “The scoreboard sits basically in a warehouse waiting to be installed.”

John Allison said the league tapped Terraspec Engineering out of Peterborough to do the engineering work for the installation.

“They said we had to have two steel girders an inch thick by five inches and angle iron to such a spec and concrete to meet a spec, so we’re doing it up the way it’s supposed to be done,” he said. “The scoreboard only weighs 500 pounds, but it will definitely catch wind in Wellington, so that’s why we’re doing it to spec and that’s why the cost is so high.”

Ronan recalled that the last time the league sought council’s support was 12 years ago back in 2007 when there was no regulation baseball diamond in the county. At the time there was one hardball team. Council contributed some funding while much of the construction was undertaken by volunteers.

“Today we are a very large association and, what started out as one baseball diamond that was done with the support of council, is now three baseball diamonds and a very good facility — one of the best in eastern Ontario,” he said. “Over 200 kids register to play and that baseball diamond is used from April to October every day of the week, multiple games a week.”

The diamonds are helping keep local children active and are attracting people from outside the county to Wellington, he said. He said the diamonds are well-maintained thanks to John and Jane Allison, who volunteer their time to cut grass and organize work parties to make repairs. He said the league regularly uses resources gained through partnerships, charities, raffles to complete those works.
Ronan said the scoreboard would only add to the diamonds’ prestige.

“It is instrumental, it does make our area, our community field, a place that’s attractive, that represents for the entire region,” he said.

He said the support was there in 2007 and he’s hoping it will be there this time around.

“We said if we were able to build this field, they will come,” Ronan said. “We started with one team at a midget level and now we have over 18 teams, we have regional teams and we have committed to our pledge of keeping our kids in our county.”

Councillor Janice Maynard said it’s hard to believe it’s been more than a decade since the field was first constructed.

“Ball is an important part of this county, to me, it’s a heritage sport, it’s a generational support,” she said.

She said her own daughter started out on the first hardball team and now plays in a league that features players from ages 19 to 65.

“It’s something that’s near and dear to my heart, I applaud what you’ve done with that diamond and I hope we can find some way, some program, somehow to support that,” she said.