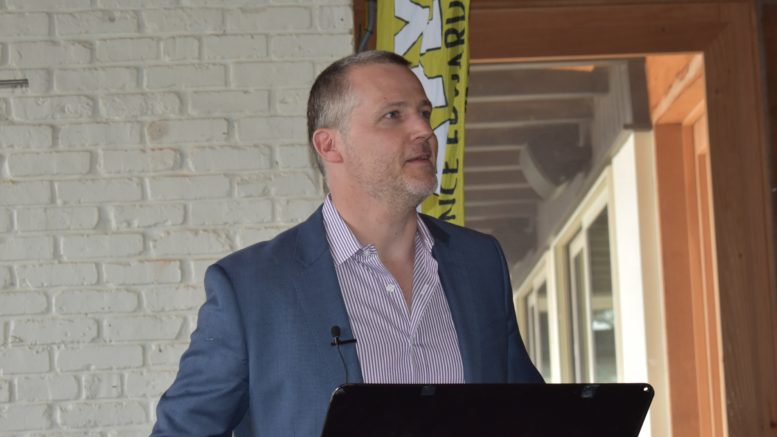 The region’s leading professional summer theatre company is combining old and new for another fantastic season of live entertainment.

On Friday at the Drake Devonshire in Wellington, veteran actor, director and producer Graham Abbey announced Festival Players’ full lineup for the 2018 theatre season that will run from July-September in Picton and Wellington.

Abbey, in his first year as the company’s Artistic Director has assembled some of Canada’s finest actors, playwrights, directors and designers to bring five different shows to life in The County this summer.

“I am absolutely thrilled to announce this extraordinary company of artists who will come to play with us in The County this season,” said Abbey. “From iconic Canadian recording artists, to classical theatre and Broadway veterans, we have assembled a stellar line-up of stars from our great Canadian stages, re-imagining award-winning Canadian scripts in a brand new Studio Theatre and two historic County venues.”

The 2018 season kicks off in July with a one-night-only event, Songbook: Steven Page with the Art of Time Ensemble.

Page, founder and former leader of the legendary band Barenaked Ladies, joins Toronto’s highly inventive ensemble for an evening of seminal songs by Randy Newman, Radiohead, Elvis Costello, Barenaked Ladies, Leonard Cohen, Page himself, and more. These gems are reimagined and reinvented by some of Canada’s greatest writers in classical, pop, and jazz, and delivered by a defining voice in contemporary rock. Songbook is chamber music for the modern era. Festival Players is thrilled to work in association with The Regent Theatre to present this exiting event.

In July, the village of Wellington becomes home to the members of the Festival Players Academy for Young Actor Training. Eleven young actors have been given the extraordinary opportunity of working with acclaimed Actor/Director, Bruce Dow, through two weeks of intensive professional training that will culminate in two showcase performances on July 21 and 22. The Academy includes two local actresses, Kelli-Ann Maycock and Fiona Dodsworth, along with youth from Kingston, Peterborough, Toronto and Southwestern Ontario.

On July 26, 27 and 28, Dow then takes to the stage himself at the Wellington United Church in the premiere of his new comedic, yet touching one-man-musical, A Funny Proposition. Having mastered the fine art of cabaret, Dow invites you to join a poor, lost soul traveling along the highway of life as he comes face-to-face with those events we can never anticipate. Heralded as fearless, intimate and energetic, Dow’s melodic performances are not to be missed.

The season continues to heat up on August 1st as Festival Players opens the doors to their new Studio Theatre on Main Street Wellington with a new production of Michael Healey’s award-winning drama The Drawer Boy.

The beautifully reimagined and expanded Studio Theatre will play a vital role in the future growth of Festival Players by broadening its scope and ability to attract unique programming while providing a space for community arts activities.

A truly iconic Canadian script, The Drawer Boy won the Dora Award, Chalmers Award and Governor General’s Award for best play. This production will run until August 18th, with a special appearance by playwright Michael Healey on Monday August 13th for a script reading and Q&A.

Festival Players heads back to Picton from August 22nd to September 2nd, 2018 as The Regent Theatre plays host to a two-week run of the international smash hit play Blind Date starring Christy Bruce as the vivacious and hilarious Mimi. Experience all of the exhilaration and excitement of new love as Mimi goes on a blind date with a different man every night – plucked right out of the audience.

To round out the season, from Sept. 4 – 23, Festival Players brings together an incredible cast and artistic team to create a new production of Daniel MacIvor’s A Beautiful View. This production, helmed by acclaimed director Andrea Donaldson (Tarragon Theatre, Nightwood Theatre), and featuring Maev Beaty (multiple Dora Award-winner, Stratford veteran) and Liisa Repo-Martell (Gemini Award-winner, Stratford, Souplepper) will play at the Studio Theatre in Wellington. A Beautiful View is one of MacIvor’s most celebrated plays: full of warmth, wisdom and a quirky sense of humour that reveals the contours of the close relationship between two women.

Festival Players is most grateful to our sponsors including the 2018 Season Presenting Sponsor, Huff Estates Winery, who are joined by Production Sponsors BMO Financial Group and Elizabeth Crombie Royal LePage ProAlliance Realty. The Season is supported in part by The Government of Canada, The Government of Ontario, The Ontario Arts Council, Prince Edward County, and The Great Waterway.

Tickets for all events are on sale now and range from $36-$42 with senior and youth pricing as well as subscription packages available.

Tickets for Songbook: Steven Page and the Art of Time Ensemble as well as Blind Date are also available through the Regent Theatre Box Office at www.theregenttheatre.org.