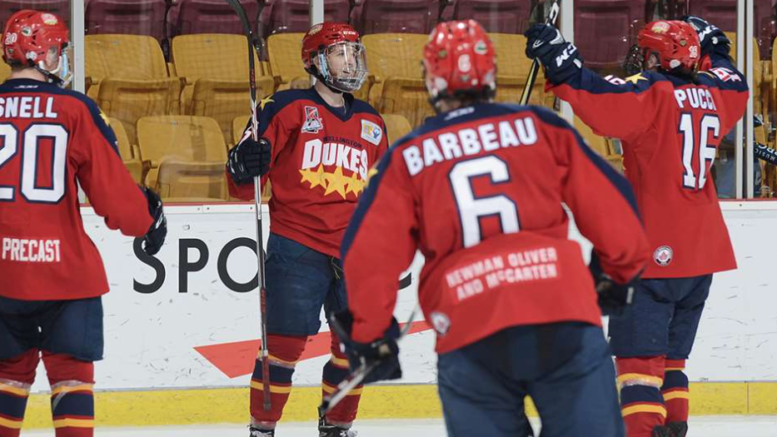 FINDING A WAY- Wellington Dukes teammates surround Mitchell Mendonca after the forward scored a game-tying goal in the third period of the club's 3-2 win over the Steinbach Pistons Monday at the 2018 Royal Bank Cup in Chilliwack, BC. (Matthew Murnaghan/Hockey Canada Images)

The Wellington Dukes are very much in contention at the 2018 Royal Bank Cup in Chilliwack, BC thanks to a 3-2 overtime win over the Steinbach Pistons of the Manitoba Junior Hockey League Monday night.

Teddy McGeen collected an Andrew Rinaldi drop pass and ripped a wrist shot through Steinbach Pistons netminder Matthew Radomsky just 59 seconds into the extra session to give Wellington its first victory of the five team tournament.

By virtue of the two points it picked up for an overtime win and a single point for a regulation tie in the opener against the Ottawa Jr. A Senators, Wellington has three points and finds itself in a three-way tie for second place in the tournament standings with Chilliwack and the Jr. A Sens.

Wenatchee Wild led the five team bracket after Day Three with five points and the BCHL Champs have managed the only regulation win thus far in the tournament, a 4-3 win over the Pistons.

On Monday with both teams looking for their first win of the RBC, Steinbach opened the scoring early in the second when Riese Gabor collected his own rebound off a wrap around attempt and ripped the puck through Capriotti at the 2:51 mark.

Later in the penalty-filled second, the Pistons pumped home another goal while on the powerplay.

Drew Worrad made a nice cross ice feed to Darby Gula who made no mistake putting a laser beam past Capriotti at 9:15 of the second to make it a 2-0 lead in favour of the Anavet Cup champs.

Wellington would be tasked with killing a pair of penalties just over two minutes later but it would be the Dukes lighting the lamp behind Steinbach starter Matthew Thiessen.

Andrew Barbeau would intercept a Pistons pass just above the hash marks and sprung the speedy Bryce Yetman for a breakaway from his own blueline.

Thiessen would stop Yetman’s initial five hole try but couldn’t corral the rebound and the Whitby, ON native snuck it between the legs of the Steinbach netminder to bang home Wellington’s first of the game.

The game might have hinged late in the second after Thiessen misplayed the puck and was forced to scramble back to the Pistons net with a minute to go in the frame.

In doing so, the Steinbach goalie injured himself and was forced out of the contest with 33 seconds left in the second.

Wellington would tie it in the third when Mitchell Mendonca was able to collect a high Barbeau point blast of the glass and deposit it over Pistons backup netminder Matthew Radomsky.

The teams combined for 21 minor penalties in the contest with the Dukes going 1-for-8 with the man advantage.

Wellington will meet the host Chilliwack Chiefs this evening at 10 p.m.

The game can be watched live at https://www.hockeycanada.ca/en-ca/national-championships/men/national-junior-a/2018 .

Dukes fans are welcome to watch Tuesday’s game at the Task Force Lounge at Essroc Arena.