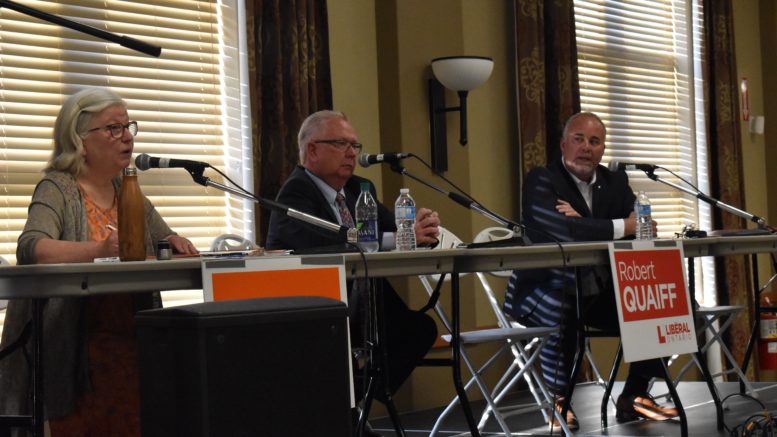 From healthcare to hydro and all topics in between, about 75 interested voters gathered at the Highline Hall to hear from three of the seven candidates running for the position of MPP representing the new riding of the Bay of Quinte on Tuesday evening.

A debate organized and hosted by locals representing the Canadian Union of Public Employees, the Elementary Teachers Federation of Ontario and the Retired Teachers of Ontario brought Progressive Conservative Todd Smith, Liberal Robert Quaiff and New Democrat Joanne Belanger together for a debate on a myriad of topics.

In their introductions, all three candidates spoke to their reasons for running and why themselves and the party they represented would make a good fit to sit at the right side of the speaker at the Ontario Legislature.

Joanne Belanger, a chaplain at Nicholson Catholic College in Belleville called the 2018 Ontario General Election a a watershed moment in the history of Ontario” thanks to the past 23 year where the province has endured the Harris, Eaves, McGuinty and Wynne years and seen governments that have slashed and cut services that the average Ontarian depends on- especially those on fixed incomes and those most vulnerable.

Belanger also spoke to the wasted funds the government has squandered over the past years that could have been spent on helping average Ontarians.

“There is hope,” Belanger said “(NDP Leader) Andrea Horwath has a fully costed, well-laid out platform that would bring change for the better for people of Ontario.Imagine a province where all families could get the prescription and dental care they need and the buy back of Hydro one could reduce their hydro bills. Where students could emerge from post-secondary education without a cloud of debt hanging for their heads and get a full time job.Where Seniors get the care they need and deserve. Where a trip to the hospital doesn’t require hours in a hallway or waiting room and surgery doesn’t mean months of waiting and where we narrow the gap between the haves and the have nots.”

Liberal candidate Quaiff spoke to his time as Prince Edward County councillor and mayor and mentioned some of the advances this municipality has made under his watch including the rehabilitation of Picton’s Main Street and other roads and the expansion of water and sewer lines to Macaulay Village.

“I want to be your next MPP because I want to take this strong and dedicated voice from the Bay of Quinte to Queen’s Park. This is what I love to do and this is where my ties are,” Quaiff said. “This election is about two things- about creating care and moving Ontario ahead in a positive manner or it’s about creating cuts. For me, the decision to come onboard (with the Ontario Liberal Party) was made easy with free early years education, expanded OHIP, home care for seniors and free tuition.Those are policies that line up my values and the things I stand for.”

Smith, who has represented this area previously when it was called Prince Edward-Hastings explained that he went to Queen’s Park in 2011 and promised constituents he would be a strong and local voice for this region.

As it was a teachers and support staff unions, a number of the early questions surrounded education.

Belanger said the NDP leader would examine and change the school funding formula but do it in a collaborative manner with education leaders and parents to ensure that works for all students, making it fair and equitable for all stakeholders.

Quaiff did his best to defend the government’s actions recently when it came to education investments and said the bottom line when looking at the school funding formula was that in order to have quality programming in the classroom, there needed to be a certain number of students in each class.

“If you don’t have the students in the seats, the funding gets affected,” Quaiff said. “When it comes to school closures, I’m not quite sure if any other party could have reduced them in any other way.”

Smith blasted the government for closing schools in a large swath of rural and small town Ontario, stating it was due to broken pre-election promises.

“The Liberals had promised to look at the funding formula when it came to education and change it because it has been hurting small rural schools,” Smith said “The Liberals haven’t lived up to their promises in each of the last two elections and we’ve seen 600 schools closed, many of them rural in Ontario and some of them here in Prince Edward County”

During the open floor session of the debate, Wellington resident Scott Johnston said what has undoubtedly crossed many voters minds in the Bay of Quinte and that was how can Smith call on constituents to support party leader Doug Ford whose brash demeanour and, ahem, ‘Colourful’ comments have caused pause for even the most ardent right leaning supporter.

“I’m having trouble with the fact the PC’s have elected a leader that’s been called a buffoon and has been referred to as Ontario’s Donald Trump,” Johnston said. “Help me reconcile that I would really like to support you but I’m having difficulty with Doug Ford as the premier of Ontario.”

Smith said he would stand on his record as opposition MPP and holding the government to account over the last six years and added that his leader’s reputation is blown out of proportion.

“The Doug Ford persona that exists is not accurate, Doug cares about people and he is not a buffoon and he understands people. He is very collaborative and those in his caucus that have been working on these issues including myself on hydro- we know what we are talking about. Christine Elliott is quite likely to be our next Minister of Finance or Minister of Health and our caucus can help our leader whenever he might need it.”

When asked by CKWS news anchor and moderator Bill Hutchens if Ontario was ready to test-drive a Ford, Belanger quickly retorted “I certainly hope not” and admitted she was taken aback when Ford was chosen as PC leader,

“We need to look at a leader like Andrea Howrath who has a solid track record and has worked in community work for many years. She really does care about people and she ‘s prepared to consult and work with them. We are all part of this province, not just the people at the top end,” Belanger said.

Quaiff said in comparison that he would take Premier Wynne any day.

He added that Smith twice supported Elliott as leader and was unkind to Ford and the prospects of a PC party led by the former City of Toronto councillor during the recent leadership race.

“I’ll take my leader any day, Quaiff said “She is sincere and heartfelt and concerned about the people in this province.”