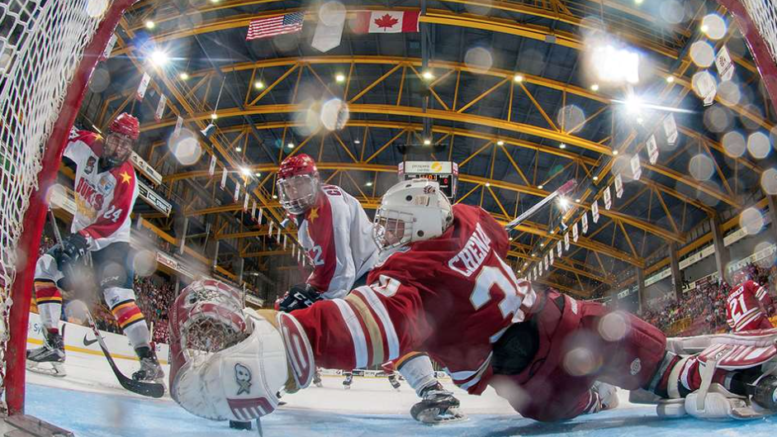 Given the normal run of things, the Wellington Dukes’ 1-1-1 record through their first three games at the 2018 Royal Bank Cup might not be too concerning given the fact only one team of the handful vying for Canada’s Junior A Championship will be eliminated after the preliminary round.

But these aren’t the normal run of things.

Unfortunately for Wellington, the club’s three points that it’s gathered by virtue of an overtime win and an overtime loss is deflated somewhat due to the fact the tournament awards three points for a regulation or ‘clean’ win that doesn’t require an extra session or a shootout.

And with Wellington’s 2-0 loss to the host Chilliwack Chiefs Tuesday night, the Dukes could find themselves coming home early if they can’t score some points against the British Columbia Hockey League Champion Wenatchee Wild or the last place Steinbach Pistons shake off a bad start and pick up their first win of the tournament.

Steinbach, with a game in hand on Wellington but just one point to show for two games, play the Ottawa Jr. A Senators tonight.

The Dukes were due to play the undefeated Wild on Thursday afternoon while the Pistons and the host Chiefs close out the preliminary round later this evening.

The top four clubs meet on Semi-Final Saturday and the Wild and the Chiefs have already clinched their spots while the Jr. A Sens lead Wellington by a point.

On Tuesday evening, the Dukes couldn’t solve Chilliwack netminder Daniel Chenard or the sometimes laughable officiating that saw a steady stream of players paraded to the penalty box in a powerplay showcase hardly fitting of a national championship game.

Interactions that would hardly draw a second glance in a heavily governed Ontario Junior Hockey League game in October were whistled immediately as the teams combined for 19 powerplays.

Without the ability to create any type of flow, Wellington looked stuck in neutral for much of the contest.

Chilliwack would pot the game winner in the first ten minutes of the contest on what else but a powerplay as Will Calverley scored his fifth goal of the tournament at the 7:24 mark.

The Chiefs would double their lead later in the contest when Corey Andonovski beat Wellington starter Jonah Capriotti at 6:36 of the second.

Wellington would boil over as a result of the officiating in the later stages of the game with three players getting rang up for 10 minute or game misconducts.

Chenard’s 26 stops earned him the first shutout of the tournament and the game was the first decided by more than a single goal.

After a day off, Wellington will need their biggest effort of the season on Thursday if they have any desire to continue this playoff run.