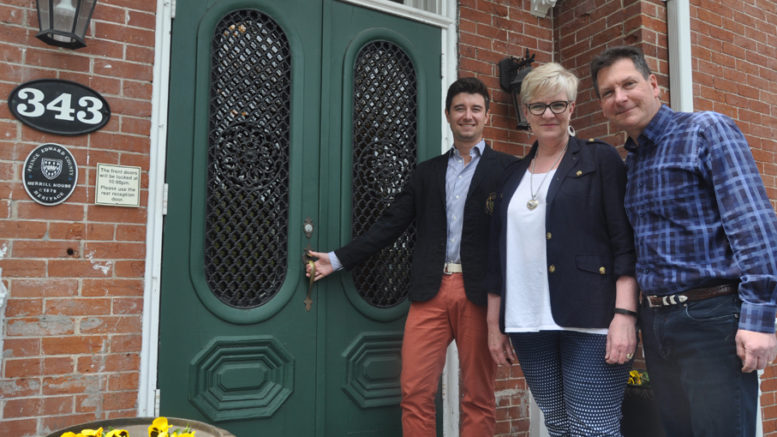 New ownership -Jordan Martin, left is poised to take on running the Merrill Inn, a boutique hotel in a historic 1878 Main Street building from Amy and Edward Shubert, its owners for the past 17 years. Martin will continue to operate the building as a hotel and he has plans to build on its success. (Adam Bramburger/Gazette staff)

After 17 years in business, Shuberts find buyer to build on their dream

With a background in large retail hotels and a shared interest in having their own boutique inn, Edward and Amy Shubert found Prince Edward County some 17 years ago.

After building a renowned business from the ground up in a picturesque heritage building, they’re ready to hand over its keys to the next dreamer.

On Monday, the Shuberts announced they’d reached a deal that will see Belleville native Jordan Martin take on the Merrill Inn corporation June 1. It is his plan to maintain the inn and its staff and add to existing operations.

“We’ve lived our dream. It’s now time for Jordan to live his dream,” Amy said. “The sky is the limit.”

When the couple first came to Prince Edward County, it was a little-known getaway that Edward said was often confused for Prince Edward Island. From the start, however, they saw potential here.

“When we travelled, we always loved small hotels, country inns, and little boutique properties. It was always a personal dream of ours to maybe run one ourselves,” he said. “It was serendipitous that we found ourselves in this environment, but we didn’t dream it would become as vibrant. The growth and what we have seen here, we didn’t quite envision, but we knew it had potential.”

When they purchased 343 Main Street, Amy said it was in need of some repairs and tender loving care. There was also no established business. At the time, they moved in with their 5-year-old son and two cats and started to work.

“It has been redone from top to bottom, front to back, and right out to the curb and back,” she said. “It was kind of held together with yellow electrical tape. It’s been a complete build.”

Coupled with the inn itself, the Shuberts also envisioned a fine dining element and were fortunate to recruit Michael Sullivan as chef to build their dinning establishment.

About three-and-a-half years ago, the Shuberts started to look at other dreams and they knew the timing was becoming right for a sale as the county was attracting a new demographic of visitor and entrepreneur, keenly interested in its wine, culinary, and artistic communities.

“I think it was time to start thinking about turning it over to someone with some fresh ideas,” Edward said. “We’ve been 40 years in the industry, it’s been a great career, and I think we’re at the point where we’d like to take it easy a bit.

“We’re not going anywhere — we love the county, this is home — but we recognized it’s a good time to find someone who would like to continue the legacy.”

There were offers over that time period, but Edward said there was some apprehension a buyer might not keep the 19 employees on staff and they might not continue running the hotel or the restaurant.

Enter Martin. A Queen’s University alumnus, he has been involved in the hospitality industry around the world. He settled in London, where he completed his post-graduate work, and did marketing for groups of hotels both in the United Kingdom and around the world. For a time, he worked with the Jumeirah Group in Dubai, U.A.E. with some high-end properties, including the famed seven-star Burj Al Arab, which is designed to look like a sail. As he worked in the chain world, he started to have a similar vision as the Shuberts did.

“I had a dream to have my own hotel. I started looking with my parents for some options. I looked in England, and I looked in France,” he recalled.

Martin lists wine and art as two of his favoured interests, so it wasn’t surprising that in December, he turned his attention to his own backyard where those were blossoming. Then, he found the Merrill Inn.

“I definitely recognized the potential in the building itself — this gorgeous historic building,” he said, noting he’d studied the history of British architecture and recognized the 1800s Gothic Revival style.

“From the pictures online, I thought it was a really interesting building,”

Martin also recognized that the county had grown and changed much since he lived in the area and the difference was much to his liking.

“It’s been great the last couple of months refamiliarizing myself and seeing all these amazing vineyards popping up and the arts scene in the county itself,” he said.

Martin said he’d been hearing about the Burgundian style of county wine and its high production values. He’d also thought about the idea that the county is to commercial Niagara like Sonoma is to Napa Valley and it appeared there would be a healthy market to tap into

He’d had some in-depth discussions about his vision for the building with the Shuberts and eventually, they all decided there was a fit.

Martin said also recognized the restaurant and Sullivan represent a “huge asset” that will help him market the inn to potential customers looking for a weekend away.

Over the past few months, Martin has had a chance to meet with the Merrill Inn staff and he said he’s eager to involve them in his vision for the hotel.

“It’s a great staff and a solid business,” he said. “We’ve talked a lot about different chances that will potentially be mad. They’re on the same page and they’ve recognized a potential for this or for that.”

Asked about his plans, Martin said he’d like to incorporate technology in a more meaningful way throughout the building. He’s also going to make it a priority to build a wine cellar to add to the restaurant operations.

“We have a reputation for a discerning wine list and excellent food and we want to complement that,” he said. “We’ll be housing Prince Edward County wine in the building.”

He said there is a great sommelier in place who has experience in Napa and she’ll be counted on to share experience in building the cellar.

Otherwise, in the short term, Martin is planning to do some structural work in the building and add air conditioning. Any renovations aren’t expected to impact the day-to-day operations of the inn. Typically, the Merrill Inn closes for a few weeks in January and Martin’s plan is to do interior work during that time period.

“It will be very brief and business won’t be interrupted,” he said. Otherwise, he likes the operation the Shuberts have been running and he plans to continue to prioritize hospitality, high service, culinary, and a strong rapport with the local arts community that sees many pieces displayed throughout the inn.

“It’s very clear that it has been a lot of heart and soul that has gone into it. It’s one thing to see the pictures, but to come in and see that so much of the business is already aiming to the same (ideals) — having very personable staff and that level of service already being here meant the business is of far more value,” he said. “We’re not changing direction entirely or starting from scratch, which is what they’ve had to do 17 years ago.”

Edward said he believes Martin should be in a great position to succeed. “What Jordan is assuming here is some great people. That’s the backbone of what he’s getting here. It’s goodwill,” he said.

He mentioned the Merrill Inn had just hosted a blogger from Germany who had visited the Thousand Islands, Niagara and other tourists regions. Her observation about the county is one he believes Martin will be able to uphold alongside the staff as they begin the next chapter for the historic inn.

“She really liked this area the best because of the authenticity she felt was missing in Niagara. What she was looking for is rural roots. The challenge as it grows is to continue to maintain that,” he said.

“The most important element (of any sale) was finding people who would respect and preserve what we’ve got and that’s this team of people here.”

Although Martin will begin running the business in June, the Shuberts say they plan to be available to help with his transition and they’re excited to watch what he does.