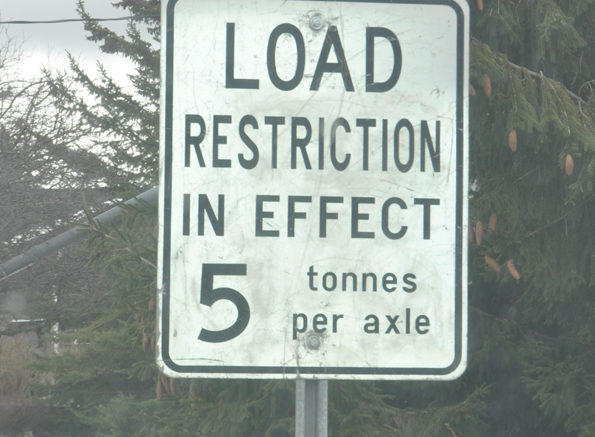 The County’s Community and Economic Development Commission (CEDC) is recommending that council investigate ways local farmers can maintain access to markets during half load periods on local roads.

The CEDC approved the motion at their May 14 meeting after receiving a staff report indicating local farmers have inadvertently been facing some negative impacts. The half-load periods are annually put in place during the spring thaw when roads are soft in order to mitigate damage due to heavy loads.

The report says over the last two years, the municipality’s reduced load period has been activated earlier than usual. The restrictions have come into effect in mid-January which results in a reduced load period of close to four months. The move ultimately proved to be an impediment to local commodity grain farmers who were trying to ship their product to market during the crucial export period of January and February.

The report says farmers approached the municipality over the last few months to express their concerns. They said the reduced load period has been prolonged and is making it difficult and more costly to move their product.
“Staff in our department became aware that some members of the agricultural community were experiencing challenges related to getting their product to market because of the increased length of the reduced load period,” Carbone said. “That prevents the types of trucks from accessing the roads with full loads and it’s a severe detriment because of the increased cost to get that product to market.”

The report says the farmers want to comply with the load restrictions but are faced with two options — waiting until the period ends to send full loads or risk sending full loads anyway. Doing the latter could result in fines from the Ministry of Transportation or the Ontario Provincial Police, while the former could be a detriment to their operations when it comes to cash flow and maximizing exports during a time with the best market prices.

The report said the situation presents a chance to look for a solution that would help farmers get their products to market without risking municipal infrastructure. An upcoming municipal Transportation Master Plan could note agricultural areas with the greatest need when contemplating road construction budgets and plans, the report suggests. The move might help avoid issues with the restrictions by addressing the reasons they have to be put in place. The report says temporary exemptions which may be permitted by the Highway Traffic Act could also be investigated.

Carbone said it’s a broader infrastructure matter that is best dealt with by council and the engineering, development, and works commission.

“Because it has to consider preservation of our infrastructure and other implications through the other commission, it’s important that they assign that to the appropriate staff to look into,” he said. “It is well within the commission’s auspices to refer the issue on the basis of it having a detrimental economic impact to a sector of our community.”

Commission member Emily Cowan said she was speaking with a local farmer recently about the issue. She said that farmer mentioned that milk trucks are able to travel with full loads during the restriction because of the perishable nature of the product. The farmer suggested something similar could be instituted for commodity-based goods.

“I’m glad that we’re looking at it and there are already some exceptions that are being made,” she said. “While our roads are struggling, we still need to support the agriculture sector as much as possible.”