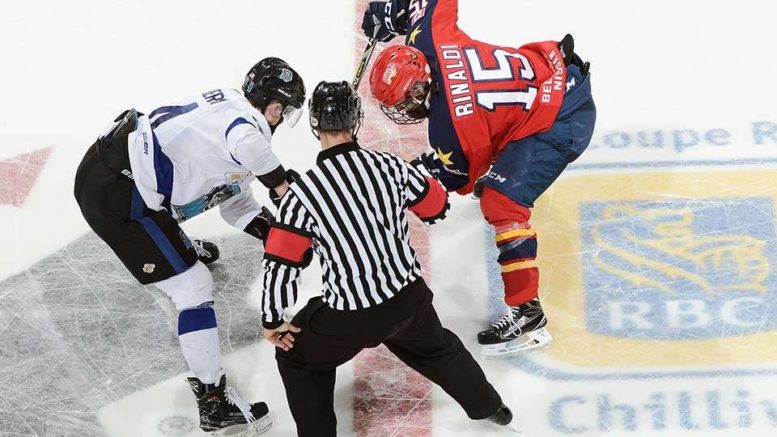 Following a devastating game against the touranment-leading Wenatchee Wild, Thursday, the Wellington Dukes got some help from the host Chilliwack Chiefs to reach the RBC Cup playoffs.

The Wild got on the board just 24 seconds into the matinee contest and never looked back, hammering Wellington by a 7-1 margin to complete a perfect preliminary round.

Wenatchee played a stingy defensive game, allowing no more than seven shots a period en route to outshooting the Dukes 41-19 — chasing starter Jonah Capriotti with four goals on 18 shots before Tyler Richardson came on in relief.

Wellington stayed close in a 3-1 first period, getting their lone goal off an Andrew Rinaldi breakaway goal 13:59 into the frame to cut Wenatchee’s 2-0 lead.

Continuing a difficult trend in RBC Cup action, the Dukes again struggled to satisfy the officials as they tallied 30 minutes in penalties — three times Wenatchee’s total — and were shorthanded nine times. The Wild only capitalized once on the man advantage.

With the loss, the Dukes fell to 0-1-2-1, leaving them in peril of missing the playoffs. Their hopes for reaching Saturday’s semifinal rested with the Chiefs’ ability to prevent the last-place Steinbach Pistons from scoring their only win of the tournament later Thursday night.

The Chiefs scored twice early as they coasted to a 4-1 victory. Chilliwack’s only blip came in the game as Piston Drew Worried scored on a two-man advantage in the third with his team down 3-0. Kaden Pickering, Corey Andonovski, Harrison Blaisdell and Ethan Bowen handled the Chiefs’ scoring.

The Dukes face a tough task tomorrow with a rematch against Wenatchee 48 hours after their preliminary round loss. The puck drops at 5 p.m. Eastern Standard Time.  The winner will advance to the RBC Cup championship game Sunday.