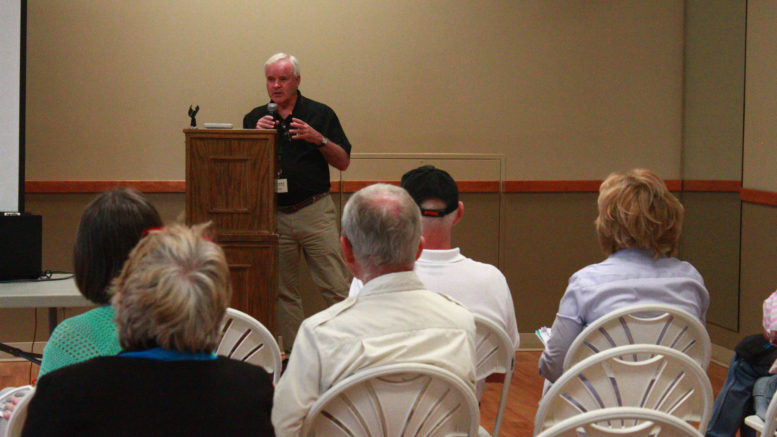 It appears the Prince Edward County Heritage Awards won’t be handed out this year, but they’ll return.

The awards — hosted by the Prince Edward Heritage Advisory Committee (PEHAC) — were last handed out in June 2017. PEHAC chair Peter Lockyer told the Gazette the awards will return in February 2019. The 2017 incarnation coincided with the Prince Edward Historical Society’s Two Days About Yesterday event. In 2019, both the awards and Two Days About Yesterday will be part of the slate of events planned for February’s Heritage Week.

“What we’ve said is why don’t we consolidate all of the heritage stuff into Heritage Week, which is the third week in February,” Lockyer said.

He said last year’s Heritage Week saw many groups from across the county — including PEHAC, the historical society, the Regent Theatre and the Friends of Sandbanks — come together to organize a successful series of events under the Flashback February banner.

“We put that on and everybody was quite encouraged by the response to it in the community,” he said. “A lot of people said it’s really interesting to have something to bring us out of the cabin fever in the middle of winter and have all these speakers and events going on, so we’re building on that.”

Lockyer said the conclusion of Heritage Week 2019 will be a period-themed dinner. The awards could be tied into the evening, he said.

He said the heritage events can have much more impact when all of the various groups combine forces and consolidate them into a cohesive presentation. What doesn’t work, he said, is trying to host smaller heritage events during the summer when there are so many events happening.

“We don’t have the marketing power, so we either participate in existing things or we create our own event in a period where we have an opportunity to be heard and attract an audience,” he said.

“Our model with the Heritage Week is we really want to make it into a Maple in the County,” said Lockyer. “We would advance the tourism season just that much earlier here. It was very much a local event this year — and that’s okay — but in the long term we’re working toward making it a major tourism destination in February.”

PEHAC will be advertising the opening of the nomination period for the 2019 Heritage Awards later this summer. Lockyer said the awards are a nice way to recognize contributions to the preservation and promotion of local heritage.

“It’s a great thing to do to honour people who’ve — quite often on their own — just done something extraordinary with their properties or maybe they’ve been a real heritage advocate over the years,” he said. “At the very least we are saying thanks to people for respecting heritage and history.”

Last year the awards acknowledged Alexandra Bake for her commitment to the conservation of built heritage, Elizabeth Crombie for her efforts in heritage awareness and advocacy, the Hastings and Prince Edward Land Trust for its preservation of cultural heritage landscapes, and Steve Campbell who was presented a lifetime achievement award for his dedication to cultural and built heritage.

Lockyer said the awards are part of an effort to create an environment that is both pro heritage and pro development.

“I don’t think they’re exclusive things,” he said. “They can live quite easily in tandem.”

Council earmarked $100,000 in the 2018 budget for a heritage fund. The fund would provide small grants to those with designated heritage properties or those within the Picton Heritage Conservation District to help preserve or enhance them.

PEHAC has been working on the details of the granting program and are expected to bring forward a draft in June.

“It’s part of an overall strategy that is to promote heritage, but do more than just promote it and celebrate it — it’s really to create an encouraging environment where we’re saying heritage really matters in Prince Edward County,” he said. “We’re putting our money where our mouth is and here are things we do to try to make this appealing to people.”

Community development director Neil Carbone told members of the County’s Community and Economic Development Commission (CEDC) at their May 14 meeting the commission’s budget includes $2,500 to contribute toward the awards.

The CEDC decided the money will be reallocated for this year with the expectation the awards would return next year.