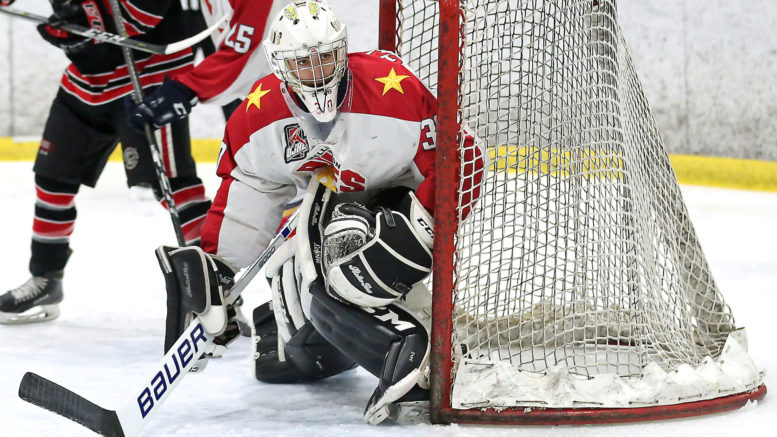 The Wellington Dukes showed their trademark resilience against long odds once more Saturday, earning a trip to the penultimate contest in Canadian Junior A hockey.

Just 48 hours after a 7-1 defeat at the hands of the unbeaten Wenatchee Wild, the Dukes rallied to beat the BCHL-champion Wild 2-1 in the RBC Cup semifinal.

Stingy goaltending in a 50-save performance by Jonah Capriotti allowed Wellington to bide its time, sit back, and look to capitalize on  turnovers and quick transition to odd-man rushes.

The difference on the score sheet came just shy of seven minutes into the third period. The Dukes picked up the puck at centre ice with Frank Pucci and Daniel Panetta breaking in on a two-on-one.

Pucci drove wide on the left wing, pulling the Wild defender with him. He deftly slid the puck over to Panetta who got just enough on a backhand shot to beat Wenatchee goaltender Austin Park through the five hole.

The Wild pressured late, but the Dukes wouldn’t break. Wenatchee caught Capriotti in a rare moment in the contest where he couldn’t get across his crease as a ricocheted puck edged dangerously close but defender Andrew Barbeau pulled it away in the nick of time.

Capriotti stood tall the rest of the way cutting down angles on a late penalty kill and making a flurry of stops in succession with just over two minutes to play that may have saved the game.

In the dying minutes, with Park on the bench, Wellington played a very aggressive game on the puck to limit Wenatchee from getting close to the net. Pucci actually nearly won a foot race to the empty net, but had his insurance shot deflected to the post.

Saturday’s game had a distinctly different feel than Thursday’s as the Dukes got the first goal 15:52 in. Capriotti moved the puck to Declan Carlile across centre and a fortuitous bounce allowed Bryce Yetman to become wide open onside just inside the offensive blue line. He broke in down the left side and cut across the front of the net, decking to his forehand and firing a goal past Park’s glove.

Yetman very nearly had the Dukes up 2-0 as he broke in alone short handed early in the second period, but Park made a difficult pad save.

The Wild got their lone goal just ahead of the game’s halfway point. Defender Zak Galambos straddled the blue line and walked to the middle of the ice before snapping a seeing-eye shot through a sea of black and white sweaters that blocked Capriotti’s view.

The Dukes will play the winner of tonight’s semifinal between the host Chilliwack Chiefs and the CCHL-champion Ottawa Junior Senators for the national championship Sunday at 7 p.m. EST. The game will be broadcast on TSN.